a PvP shooter with action, stealth and battle royale mode that engages like few others

Sometimes the mobile app and game stores are full of alternatives for all tastes that sometimes it seems that some great titles go unnoticed. This may be the case Bullet echo, a game from the creators of the timeless Cut The Rope in all its forms and versions and which is a gem in itself. And it’s also multiplayer.

It must be recognized that the mechanics of the Bullet Echo are quite simple, even if its touch controls invite us all the time to connect a Bluetooth remote control to our mobile. We have to kill them all, survive, and for that we will have to sharpen our senses because human beings do not just live by stealth. We tell you more about this game than It reminded us, and that’s good, Hotline Miami.

For him who can, this player comes for you

In Bullet Echo, we carry a weapon and our perspective is zenithal. You can move from one side to the other, turn, you cannot jump and there are not many tips for its development. As they say, it reminds us of Hotline Miami in this seemingly simple design that invites overflowing gameplay. But Bullet Echo has something very interesting: you can’t see the whole scene because it’s dark.

As we are the protagonists of every game, we see what our character sees: the cone of light from the torch that opens in front of us and it prevents us from seeing what is behind obstacles, doors or around a bend. If you want to see something you have to be careful, and maybe there’s a shotgun out there waiting for you to notice. In a way, it’s like playing classic DOOM but changing the camera position, although some dim lights on the map can give us clues about the surroundings. 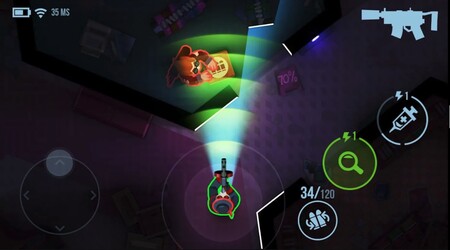 Th is is the mechanics of the game that its creators (and we too, pardon) recommend. play with headphones to hear other players’ footsteps and kicks

. Steps recreated with great quality and which allow us to know, with a little practice, where they are and even where they are going. That’s all we’ll have to navigate the scenarios of a game that throws players at a map and hopes only one of them abandons it.

Bullet Echo provides us with a total of 21 different heroes and up to 5 different classes. We have the Front Attack Tanks, the ideal Ambushers for setting up ambushes, the Snipers with more precision from a distance, the Scouts or the Troopers, perhaps the most balanced of all, although they don’t shine in any way no. more. You have to choose carefully because each hero has their own characteristics, strengths and weaknesses, and they can lead to victory on our side or on the side of another competitor.

Games can be played alone, in a team or by activating the battle royale mode so that barbarism can unleash all over the map. There are different maps for every type of game, don’t worry, everything is designed down to the millimeter. Development is similar to other battle royale games like Fortnite in the sense that the games give us a bit of a break early on to equip ourselves with ammo, defenses, weapons, and healing gadgets.

Once that first moment of calm has passed, the storm breaks out, and anyone can be saved. The title is free although purchases are offered inside to unlock different items and characters, but we can play as much as we want without spending a single penny. We leave you the download links below and good luck: happy hunting! Back to school: the best discounts for Apple students

What is your favorite Zelda memory? Tell us, you can win Switch with the Zelda maintenance package

What is your favorite Zelda memory? Tell us, you can win Switch with the Zelda maintenance package