Just three years ago, Apple announced that it was canceling the release of the AirPower for “not meeting our quality standards”. A move that at the time took us by surprise, although the occasional delays and leaks have already made us realize that development was not going as planned.

MagSafe or AirPower, one of the two

Three years later, the wireless charging landscape has changed dramatically. Let’s remember that the AirPower was this charging base in which, no matter where we put our devices, they charge. We could charge an iPhone, Apple Watch, or AirPods, and all of that simultaneously.

After AirPower’s cancellation, we still saw a few rumors that Apple may have continued development, but they were never much more than rumors. Today the landscape of wireless charging it goes through the MagSafe system which offers another approach.

The idea of ​​AirPower, to offer a universal charging base, is really interesting, although it did not lead to a final product. We can say, in quotation marks, that the MagSafe Duo is the closest thing to the AirPower. It is almost a travel charger, in which we can simultaneously charge an iPhone or AirPods and Apple Watch.

Meanwhile, more and more devices are gaining MagSafe. A system that, in addition to favoring wireless charging, offers devices the possibility of attaching wallets, external batteries such as the MagSafe battery, car holders and much more. In this context, does AirPower make sense? 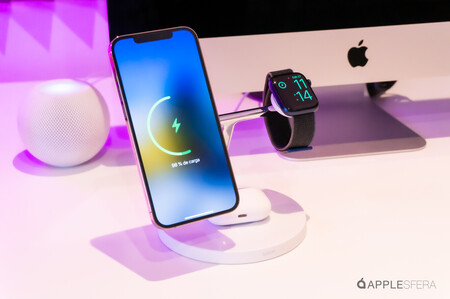 Although they seem similar technologies, the truth is that the idea of ​​AirPower and MagSafe they go almost on opposite paths

The fact that our iPhone and AirPods have MagSafe doesn’t automatically rule out AirPower, but it does change its purpose. Seeing a similar device, it is easier to imagine a trunk mat in which there are different slots

for different devices more than a large canvas where to place each device in the most creative way that seems to us.

We could see an evolution of the MagSafe Duo, perhaps a triple MagSafe, to be able to charge more devices simultaneously. We could see, many of us hope, as the MagSafe system reaches the Apple Watch, which for now still needs a dedicated charger. But everything seems to indicate that we will not see an AirPower, at least not with the same concept that it initially had.

Keeping in mind that we are relying on rumors and guesses, we can say that AirPower was a very good idea, but Apple soon realized that MagSafe was more than just a charging system. Thanks to some magnets, our iPhone can do much more. And this without going into reverse chargewhich we have much closer thanks to MagSafe.

Darktide already has a release date