Now that the step-by-step deactivation of Google Play Music is complete, it looks like Google is already on its way to its next goal: the company announced that in June, the app Google Play Movies will stop working on Roku, Samsung, LG, and Vizio smart TVs.

Another “Google Play” app seems to be in the eye of the hurricane: Google Play Movies or, in English, Google Play Movies. The service is still active, although on some Android phones – and some regions – it has mutated to be the Google TV app. On our televisions, it does not mutate, but rather will stop working in the next few months.

The Google Play Movies app for smart TVs for Roku, Samsung, LG, and Vizio continues to work for now, although displays a warning as soon as you open it stating that “YouTube is your new home for movies and shows”. 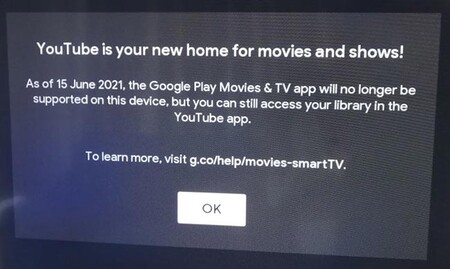 If you have content in your Google Play Movies library, you can continue to access it through its official app on these devices. Until June 15

, at that time, the only way to continue watching the series and movies you have purchased will be through the official YouTube app.

On the support page in this regard, Google clarifies that all devices compatible with Google Play Movies are compatible with YouTube, so you should continue to be able to access the content purchased with this other application. In addition, the remaining Google Play credit can be used on YouTube, as well as purchases included in the family bookstore. The only thing that will be lost is the watch lists, which are not available on YouTube.

Definitive Edition that you can unlock for free