I have two good news for those of you who have a Mac with an M1 chip, in the form of apps that have already been natively adapted to the architecture. The first is that Microsoft Office now works natively in Apple Silicon environments, as Microsoft itself announced on its official website.

The change currently affects Word, Excel, PowerPoint, OneNote and Outlook, the core applications of the Microsoft 365 service. Officials say we will notice a significant change in performance, in addition to The interface has adapted the new look of macOS Big Sur

. Little by little, Microsoft will update the rest of the secondary applications so that they become universal applications. 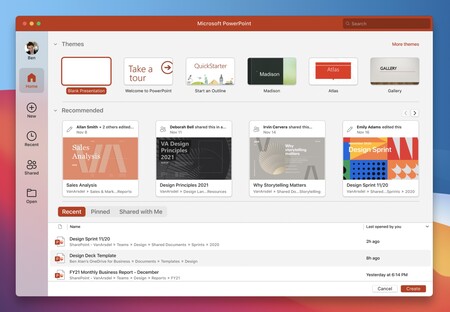 Microsoft also took the opportunity to redesign the start window for Office applications, from which we can access the most recent files and preferences for our user account. Now everything looks more in line with the macOS Big Sur aesthetic, including a translucent sidebar. Another welcome detail is that Outlook is now able to handle emails from @ icloud.com accounts.

In Mozilla, they also make the jump

The second good news is the arrival of Mozilla Firefox in the club of native applications on Mac with M1 chip. The stable version 84 of the browser thus becomes universal, and its developers promise a “spectacular” increase in performance as well as lower battery consumption.

With this we already have Chrome, Safari and Firefox; the three most popular browsers, optimized to run at full power with Apple Silicon chips. The only thing we need to do if we are using Firefox is update the browser (this can be done through its “About” window) and restart it. One last note: this version 84 of Firefox will be the last to support Flash.

Microsoft Office and Mozilla Firefox are now native to Macs with an M1 chip: it’s time to update