LG Chem, a division of the company dedicated to the manufacture of chemical components, claims to have created the toughest and most resistant flexible screen: the materials of this panel exceed glass despite its thinness. AND supports over 200,000 folds without fragmenting or leaving peaks on the screen.

Samsung’s new generation of foldable cellphones are bringing this type of smartphone to a larger user segment, and its price is starting to get “popular” in vain. Yes, the Samsung Galaxy Z Flip 3 is still a paid mobile premium, corn little by little it is approaching the average segment of smartphones

. Cheaper components are essential, as well as their strength. And LG excels in both respects with its new panel.

More than 200,000 folded and without risk of fragmentation 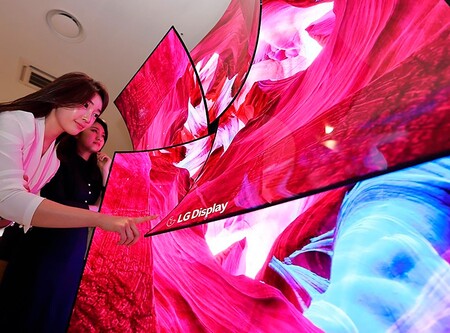 LG is one of the brands specializing in the manufacture of organic panels. Its OLED screens dominate the TV segment, they have also been integrated into some smartphones. In terms of functionality, LG knows how to make rigid and flexible OLED panels. Even if its mobile division no longer exists: the manufacturer is one of the usual suppliers of other brands.

With the new materials presented by LG Chem, the brand is at the forefront of folding panels by dint of solving two of the main problems of these mobiles: resistance and hardness. The brand ensures that its new product supports more than 200,000 folds while keeping it in pristine condition.

Even to the touch: LG Chem states that the screen will not have any imperfections, those typical ridges or creases that remain on the screen above the fold line.

The coating of the panel, made from two sheets of PET which cover both sides of the screen to give it flexibility and resistance, offers a thickness of around ten micrometers, it is thinner than tempered glass and retains the same hardness

Robust, resistant to over 200,000 bends, no edges, thinner than tempered glass and less expensive than current folding screens

LG dubbed its new covering panel “Real Folding Window”. It will begin mass production from 2022 so that the screens reach the first foldable mobiles in 2023.. If it really ends up being cheaper, we will surely see a significant reduction in foldable mobiles.

Tougher than glass, cheaper, and wrinkle-free: LG claims to have the toughest foldable display