We already have the third beta of Android 12. Compatible devices can now upgrade to this new version to take advantage of the new features and improvements offered by this important update to Google’s mobile operating system.

Android 12 beta 3 arrive for improve functionality, user experience and performance of our devices. Next, we will go over his most important news.

The first novelty to highlight from Android 12 beta 3 is that the native support of scrolling screenshots, a feature that some manufacturers had implemented in their customization layers and which now with Android 12 will reach any mobile. 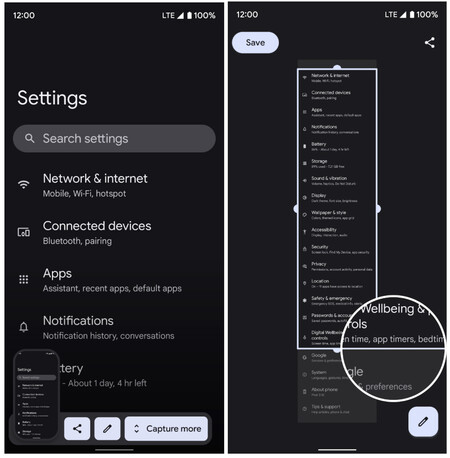 After taking a screenshot, the preview, besides showing us the sharing and editing actions, will show the new action of capture more, which will allow us to scroll the screen to obtain a full screen capture from an app or website.

The second novelty is the new game mode API that Google gave us a few days ago, with which the user can select the performance mode for each gamewhether you want to achieve maximum performance, standard performance, or save energy by maximizing performance. Google announces that the game board will arrive at the end of the year.

In Android 12 Beta 3 also supports the new feature of “Play while downloading” to be able play a game without waiting for the download to complete.

With Android 12 Beta 3 the company improves automatic rotation to make it faster and smarter. You will now use the facial detection

the front camera to know in which position you have the device, an improvement that will be very practical when you are lying on the sofa or in bed where the automatic rotation sometimes fails.

Android 12 Beta 3 also adds compatibility with the new search engine High performance AppSearch. This will allow applications to index and search structured data with built-in full-text search capabilities. So from the search bar of our mobile we will also see the content of our applications among the results.

already offers developers Final API and SDK, so that they can now adapt their applications to this new version without fear of changes in future previews of the operating system. The Android 12 SDK is now complete.

How to update to Android 12 Beta 3

Android 12 Beta 3 is now available for download on Pixels and on certain mobile devices from the main partners, such as Sharp and TCL. To do this, simply go to android.com/beta to check if your mobile is compatible with this new beta.

The Google Pixel updated to Android 12 Beta will just have to go to Settings> System> System update to update to the third beta.

Next August will arrive Android 12 beta 4 achieve with this version the stability of the platform, ending all the behavior of the system on the applications so that the developers can already test the final compatibility with their applications.

Via | Android Developers
In Engadget Android | Here is the new shutdown menu of Android 12, now integrated in the quick settings