Switching to Android reaches all mobiles with Android 12

Apple has had Move to iOS on Google Play since 2015 as an app to help with migration from Android to iPhone, and Google retaliated this year with Switch to iOS on the App Store. The iPhone to Android migration app had a little trick in that it only allowed you to upgrade to a Google Pixel. allows you now migrate your data to any mobile with Android 12.

For now, it’s still easier to move your data from iPhone to Android mobile

as long as you have Android 12, because the company announced on its blog that from today Switch to Android is spreading to all android mobiles.

Take your data with you on your new Android mobile

Changing mobiles is a tedious process and it is even more so if you change the operating system. To help you switch from iOS to Android, Google has launched Switch to Android on the App Store, an application that guides you in transferring data from iPhone to Android. There was a problem: input it only allowed you to migrate your data to a Google Pixel.

That’s changing now, as Google has announced that support for Switch to Android is coming. to all mobiles with Android 12. That is to say on the data reception side: the application itself runs on the iPhone.

In this way, it will be possible to transfer your most important data from an iPhone to a mobile with Android 12 in a less traumatic way and with fewer intermediate steps. Basically, you install the app, you connect the two mobiles either by cable or by Wi-Fi

then you choose the data you want to send from one mobile to another. 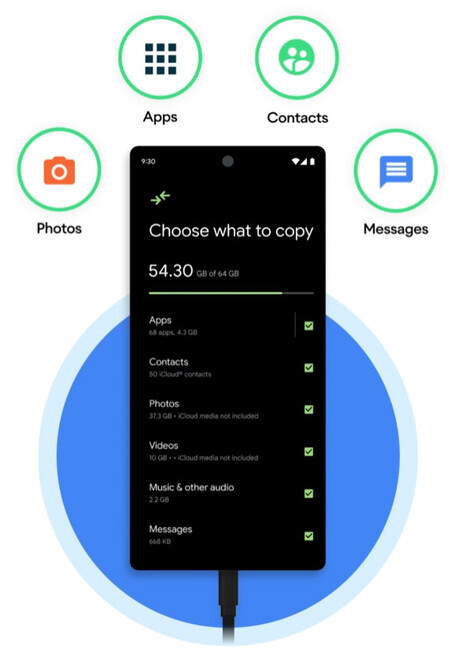 This way you can take with you contacts, photos and videos, messages, wallpaper, DRM-free local music, call log, some settings and free apps which are in Google Play. WhatsApp chats can also be forwarded, which until now was only possible on Samsung mobiles and Google Pixels.

It’s a welcome change, although not everyone will be able to enjoy it. At requires Android 12 This leaves out – according to the latest distribution data – 93% of Android devices, although it is true that most new terminals sold today already have Android 12 pre-installed.

How to fast charge your iPhone