Tentacle Pulp, an interesting initiative to read short stories in Spanish: App of the week

The arrival of summer always means a lot of downtime looking at our devices. Either because we are traveling or because we are in a dead period where we want to relax with something new. It’s time to look for new games, new applications that arouse our curiosity.

One of the applications that can cover these moments is Tentacle pulp, which has an interesting proposition: to be a repository of short sci-fi, fantasy and horror stories in Spanish which can be read comfortably in a short time from the iPhone or iPad.

Tentacle Pulp has been operating since 2019 mainly from the hand of Javier Giménez, both publishing and application development. It was born as an idea to create something more rewarding than his usual job allowed him, believing that he had less and less time to read books due to his professional and personal life.

A talk by Neil Gaiman in which he discusses the origins of creativity also inspired him to have a digital corner where he could casually read texts from authors who put his talent to the test. The effort resulted in an app / service that is among the nominees for the 2021 Ignotus Awards in the magazine category (although I wouldn’t categorize it strictly as a digital magazine).

Javier took advantage of the pandemic containment to learn how to program and publish apps in the App Store (and in the Android Play Store) and was also in charge of the app’s interface design. Outside, several authors send short sci-fi or fantasy stories, which are reviewed and published monthly in the app. Looking at the summary on the official website, we see that eight to ten news items are published each month. And when I say short, they are short: they never exceed 50 pages and there are a lot less. 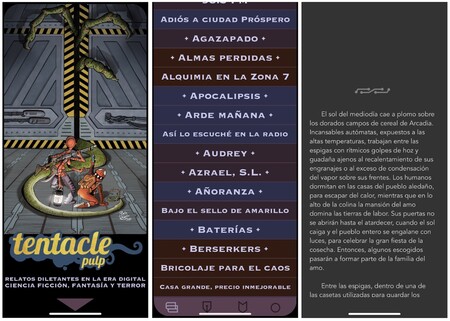 The app itself is very simple: an introductory screen followed by a long list of stories that you can access to read them. The interface is mostly dark, although there are options for switch between different color palettes, sizes and styles in texts for those who prefer a clean interface.

This shows that we are dealing with an application and a content India: the interface is a little different from the standards recommended by Apple, but he does the job and gives it a certain style that fits the mood of his stories. And due to the length of the texts, even the small iPhone screens can be used to read the stories. Perfect for a waiting room or a trip.

Something that I also find that works very well is the price. Tentacle Pulp gives us access to all their stories and monthly news for a subscription to 9.99 dollars per year, or less than 85 cents per month. It is a royalty that will make fans of science fiction reading not hesitate to pay it to access this news.

In fact it is a price that can also convince those who want start to read (something very healthy and recommended, by the way), so that instead of starting with works of hundreds of pages, they can do it with short and light texts and thus start training the brain before filling shelves with works by Isaac Asimov or Brandon Sanderson.

Conclusion: Tentacle Pulp is an interesting Spanish initiative that not only encourages reading at a fair price, but also also encourages those who want to try to have a place where they can upload short stories. You can download the app from the App Store and read fragments of the stories for free to get an idea of ​​what you’ll read if you pay for a year of access.

The first details of ‘Project Iris’ are leaked

How to embed addresses of friends and family in Google Maps

iOS 14 won’t get updates forever, Apple wants you to update to iOS 15