the future LG Rollable would arrive in 2021

LG’s Explorer project, a series of mobile phones with innovative functions, is on its way to the second model after the first LG Wing with a dual T-screen: said second mobile would be the LG Rollable, a roll-up screen phone of which we already know some technical characteristics.

LG bet this 2020 to risk in the field of smartphones, not in vain has stopped renewing its most characteristic families: the ‘G’ and the ‘V’. In return, he opted for a balanced LG Velvet and a risky LG Wing. In addition, this spirit of innovation will continue in 2021 as two phones are expected, one of them revolutionary: the LG Rollable and the LG Rainbow

. The filtration machinery starts and operates. 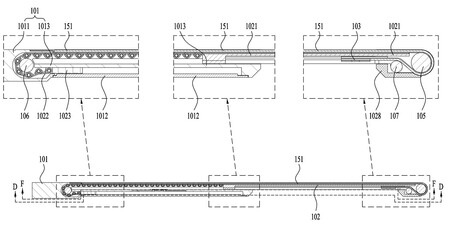 Diagram of the mechanism of the future mobile with rolling screen

LG has already anticipated its mobile roll-up at the end of the LG Wing presentation. It is expected to be similar to the prototype shown by TCL at MWC 2020: a screen of “ usual ” dimensions which, when stretched from one end (could have an automatic mechanism) expands to a more tablet-like size and ratio. In this way, it would be possible to use the phone to perform different tasks at the same time or simply to enjoy a larger useful area.

According to ETNews, a Korean outlet that disclosed future features of the LG Rollable, said the mobile would benefit from a Rollable OLED screen that would expand to 7.4 inches from the initial 6.8. The phone will be thin and also light according to the sources, we ignore the panel ratios. And it would be about to be tested under normal conditions: LG would carry out these tests at the end of December or the beginning of January 2021. Based on the results, the brand will propose a launch date; which would always be found, according to the leaks, in the first half of 2021

In addition to the LG Rollable, the Korean manufacturer also has its third mobile, although it would be less aggressive in terms of innovation: the LG Rainbow is the successor to the LG Velvet. It would be aimed at the most “premium” segment, it would include the Snapdragon 888 and the inclusion of a stylus, similar to the Galaxy Note, is under consideration. It would also be presented in the first half of 2021.

the first units reach their buyers