A little over a week ago we knew the OPPO Reno 7 4G as the most recent representative of this mid-range of the Chinese brand. However, its next big brothers are already giving people something to talk about and the OPPO Reno 8 It could be just around the corner with an aesthetic that reminds us a lot of the official OnePlus 10 Pro.

A known filtered published an alleged image of this OPPO Reno 8 accompanied by a series of features and which could well be a OnePlus 10 in its standard version, a phone hitherto unpublished. We remember that ultimately OPPO and OnePlus belong to the same parent company, which is BBK Electronics and this type of “inspirations” between their brands is not something new, also applicable to other brands such as vivo or realme. 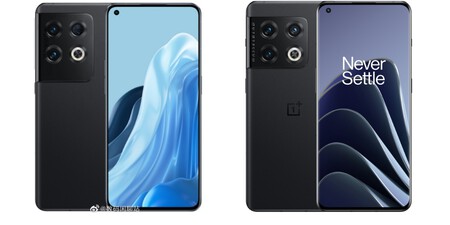 It is the leaker Digital Chat Station who, via Weibo, published a to return of what the OPPO Reno 8 would be. We insist on the conditional because so far the Chinese company has not opened its mouth to confirm or deny the existence of this smartphone, although the credibility index of this leak is usually quite high.

Comparing with what the OnePlus 10 Pro is, we observe a almost identical aesthetic line both front and rear. In fact, a similar panel can be seen in terms of using it from the front, with the front lens located in the same position. Likewise, on the back, we find a camera module integrated in a module that starts from the left, although with a little more height below than the OnePlus.

Of course, the lessor himself specified that size may vary in the official version, because he claims that he could not determine exactly this section or certain details of the camera due to confidentiality. Therefore, the housing itself could suffer some variations. We had a hunch that the materials would change, giving more value to plastic for being mid-range, which would offer a different look and feel than the OnePlus 10 Pro.

Another mid-range that would democratize 120 Hz

While it’s no longer a novelty to see a 120Hz refresh rate in a mid-range, seeing devices like the Samsung Galaxy A73 5G would mean a step up into OPPO’s mid-range. We remember that the OPPO Reno 7 at 90Hzwhich would be increased in this new generation, according to the aforementioned leaker.

Fewer surprises would be in the 6.5 inch sizea size that would be exceeded by a few millimeters compared to the 6.43 inches of the OPPO Reno 7. Still according to Digital Chat Station, this panel would have quality 1.080p

. It does not reveal whether it will be on an AMOLED panel, but it will be rare that this is not the case, since its predecessors already mount screens of this type.

Even though this leak is good, we still have a lot of details to know about the upcoming OPPO Reno 8.

Another aspect to note about filtration is that the the triple rear camera would be 50 Mpx with glasses IMX766. By the way, the same lenses that mount devices of the brand itself such as the OPPO Find X5 Pro or terminals of other manufacturers such as the Xiaomi 12.

However, there are many details to clarify of what this filter has already commented, added to other key details such as the processor or the battery. It is also not revealed when it could be presented and considering that it usually takes several months between their manufacture and their arrival in our country, we are still waiting a long time to be able to try them. In any case, we will continue to monitor it.

PS5 and liquid metal as cooling, should we be worried?

now check your passwords on your mobile