Nova Launcher is one of the best Android launchers and also one of the oldest. It is one of the most complete and versatile, with a large number of options, some more visible than others. Don’t hide one, but two secret menus or, at least, not accessible at first sight.

We explain how to access Those Little-Known Nova Launcher Menus, as well as what awaits you in each of them. If you’re a Nova Launcher fan, you might already know these shortcuts, but if not, you’ll surely love having even more things to tinker with in this launcher.

Let’s start with the simplest secret menu, a context menu with four shortcuts, similar to launch shortcuts for other apps, such as WhatsApp. Nova Launcher may not have these shortcuts when you click on its icon, but that doesn’t mean it doesn’t have a menu with multiple shortcuts.

The bad news is that you will have to use the navigation bar instead of gesture navigation, since the way to activate this menu is to press and hold the square button (Recent) on the mobile. In old mobiles, it is possible that the button you have to press is to go back.

The menu that opens displays four items: System settings, Nova settings, widgets and wallpapers. Three of them were already accessible in another way, with a long touch anywhere on the desktop that doesn’t have an icon, but adds useful access to system settings.

The advantage is that the menu is much more compact and orderly than its namesake when you do a long press on the desktop. This is a little-known shortcut with which you can quickly open system settings from Nova Launcher, without having to put an icon on your mobile.

Even more hidden and interesting is Labs’ secret menu. This menu is disabled by default, and the way to bring it up is something different from what we’re used to. You will need to open Nova Launcher settings and press and hold the volume down button for a few seconds. After a while, a message will notify you that the menu has been activated. Laboratories. 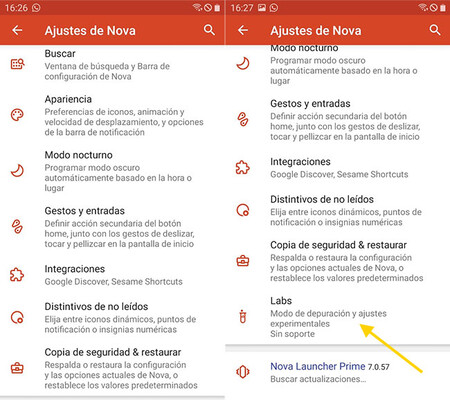 To activate the Labs menu, you must press and hold the volume down button on your mobile.

Labs is a bit of a catch-all in that there are both debugging and error fixing options as well as experimental functions or advanced. The options can change or disappear at any time, but today they are divided into several categories: miscellaneous options, permissions, debugging and time.

Some of the options you can enable

This is if you want Nova to ask you if you want to update the app, if you want other launchers to appear in the app drawer, or if Nova should try to generate its icons ignoring themes of the personalization layer. These options may be useful for troubleshooting, at your own risk. 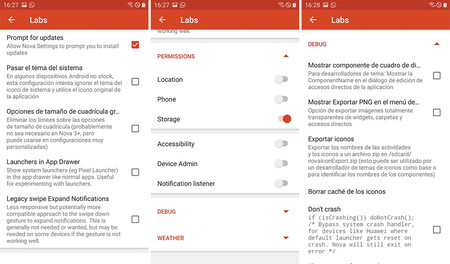 The Permissions section It is used to grant location, phone, storage, accessibility, admin, and notification permissions to Nova Launcher, although it doesn’t seem to work properly. Debugging for its part today focuses on controlling the generation of custom icons from Nova Launcher, with interesting options such as exporting icons or images of widgets, folders and shortcuts. Not suitable for all audiences, but popular for experienced users.

Finally, there is the section on Time (Weather), with which you can force Nova to take certain weather information (for example, that it’s sunny, even if it’s snowing) and apply it to the Google Toolbar widget. This is a useful option for finding bugs or checking that everything is working correctly, but whatever you choose will be overwritten the next time Nova checks weather data.