WhatsApp continues to evolve update after update, adding many features that make it more and more robust and versatile, but the truth is that there are options that have been around almost forever and it is also convenient to announce them. Not just because they’re convenient, but because many users may not yet be aware of them, as WhatsApp itself does little to communicate their existence.

One of these features, one of the most useful that we find in WhatsApp, is that we have a kind of “secret menu”, the one that it hides in the app icon itself and that we can easily activate with medium pressure. Neither short, so that it is a key, nor long so that the icon is hooked to our finger to move it on the desktop. Medium pressure and voila, the “secret menu” opens.

In this WhatsApp menu which, as they say, opens with a medium pressure on the application icon on our mobile, we we found some pretty useful shortcuts to be able to perform tasks without having to open the application first. For example, this drop-down menu that opens above the icon will contain quick access to the last three conversations in which we have interacted, the three most recent in our application.

A touch on these conversations will allow us to open them directly, but if we also keep our finger pressed on them we will be able create a shortcut to the conversation and place it anywhere on our desktop (something WhatsApp also allows and is barely advertised). But not only do we have access to the latest conversations in the “secret menu” of WhatsApp, but other functions appear there. 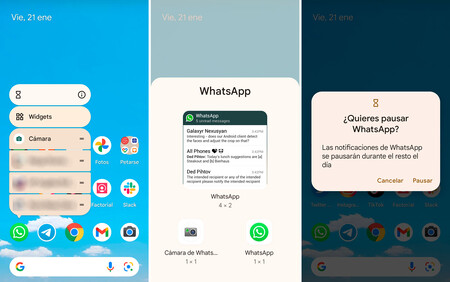 Shortcuts to the last three conversations, to widgets, to the camera, and even to pause the app for the rest of the day.

For example, in this menu we find a shortcut to the camera so we can take a quick photo to share with one of our conversations. And as in the case of chats, we can also turn it into a shortcut on the desktop. We also have direct access to widgets to place any of them on the desktop, from the one with the camera that we mentioned earlier to the 4×2 one that displays conversations.

Conversations can be dragged directly from the secret menu to the desktop to create shortcuts.

And finally, at the top of this “secret menu” we will find two icons. One of them looks like a sand clock and this will serve us to pause the application, freeze it and prevent it from working for the rest of the day (or until we unblock it). The other looks like an information button and takes us to the information about the application on our phone from where we can uninstall it, check the version it is updated to and more.

All this can be done on WhatsApp no need to open app first, just by keeping your finger pressed on the icon and displaying this “secret menu” that gives us quick access to chats, camera, widgets and freezing the application so that it stops us to warn. PS: Some options may vary depending on the version of Android you have and the customization layer. Our tests are done on a Pixel with Android 12.