Xiaomi has become the second largest smartphone maker the world for the second quarter of this year. This is a real achievement, as it moves Apple to third place and moves closer to a Samsun that continues to dominate the global market. Of course, the overtaking of Cupertino comes in a district traditionally “weak” for the iPhone.

Xiaomi is the second largest manufacturer in the world, for now

This graph is the Canalys study which gives Xiaomi the second position in sales of smartphones in the world. We see how Samsung has a 19% share, Xiaomi followed with 17%

and Apple with 14%. The three are pretty close, while Oppo and Vivo are tied at 10% each. 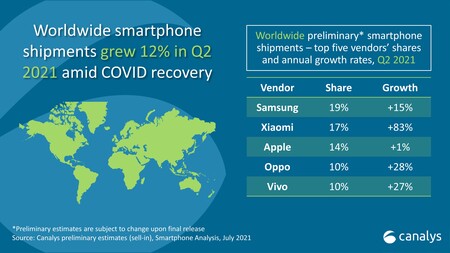 The growth rates are striking, where the Chinese brand far outperforms the rest. Its 83% year-on-year growth is much higher 15% from Samsung and even less 1% from Apple. Oppo and Vivo also have decent growths this time of year. The figures should be compared with those for the same quarter of the previous year, which had been marked by the coronavirus from start to finish.

Here we have to take into account several things. The first, and as Canalys emphasizes, is that the average selling price of Xiaomi mobiles is 40% and 75% cheaper than Samsung and Apple, respectively. In other words, most of Xiaomi’s sales come from the sale of very cheap terminals. It therefore competes little or not at all with the Cupertino iPhones in terms of actual sales by price range. 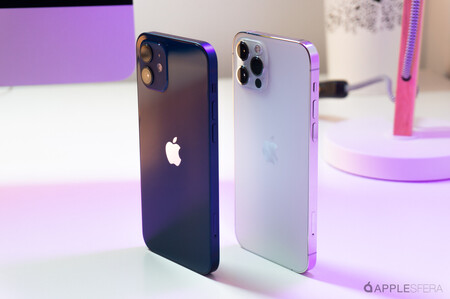 The second is that it is one of the neighborhoods lazy Apple, but the most. The company launches new terminals at the end of the third quarter of the year, with the fourth quarter being the first in which they’re sold from start to finish (last year was the exception, as the iPhone 12 debuted in October). That’s why even the third quarter typically sees a sales rebound that puts it above the second.

Therefore, these types of rankings are not very indicative if seasonality is not taken into account. Likewise, we have the opposite point of view when a new generation of iPhone debuts on the market. Last year, the iPhone 12 led Samsung in global sales in the fourth quarter. We will have to see how the year ends, although everything indicates that Xiaomi will be in the top three again.