Xiaomi surpasses Apple and is already the second manufacturer, Huawei does not appear in the Top 5 of Canalys

Xiaomi is lucky, according to the latest report from Canalys it just won the second place in smartphone shipments worldwide for the first time in its history, overtaking Apple. In front there is only Samsung, and with only a difference of 2%.

Xiaomi achieves this second position after last quarter growth of 83%, while Huawei disappears from the list. Instead, two brands owned by BBK Electronics rank fourth and fifth with 10% of the market: OPPO and Vivo.

Xiaomi, second in the world

According to the latest estimates from Canalys, global smartphone shipments increased by 12% in the second quarter of 2021. Samsung retains first position with 19% of the market and growth over the previous quarter of 15%. On her heels, Xiaomi, second in the world for the first time.

With 83% growth, Xiaomi cuts the lead with Samsung and overtakes Apple, which barely increased its share compared to the first quarter of 2021. Canalys classifies Xiaomi as second largest manufacturer in the world with 17% of the market. Xiaomi goes into more detail in this regard, adding that global shipments were 43.4 million units and year-over-year growth of 31.5% in Q4 2020 and 49.4 million with a growth of 69.1% year on year. first quarter 2021. 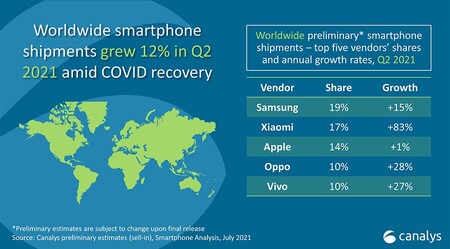 While in Europe Xiaomi already dominated the market in 2020 followed closely by Samsung, in the global context, the situation is reversed. Samsung is still in the lead, although closely followed by Xiaomi. The situation is very different this quarter compared to the previous one, when Samsung held 22% of the shares and Xiaomi 14%, an 8 point difference.

Huawei, replaced by OPPO and Vivo

While they celebrate at Xiaomi, the chain of horrible dose Huawei, which does not even appear in the ranking. Huawei Canalys Top 5 manufacturers release in the fourth quarter of 2020, being in the “others” and therefore with less than 10% of the world market. 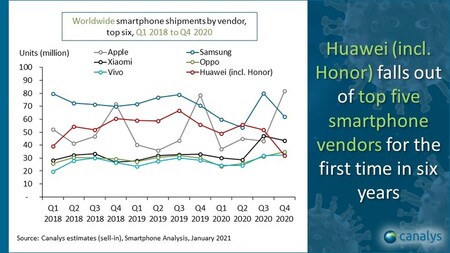 Instead, two brands continue to emerge under the same matrix, OPPO and Vivo. Each of them harvested 10% of the shipping market in the second quarter of 2021 and with similar growth: 28% for OPPO and 27% for Vivo. By bringing the two manufacturers together, we would have 20% of the market and, therefore, the first place in terms of deliveries of smartphones.

They merge the musical themes of Zelda: Breath of the Wild and its sequel in this great mix – iGamesNews

You’re sitting in front of your MacBook Pro … and it opens on its own: Rumorsfera