Google has already told us what the Pixel 6 will look like. Yes, in the plural, because this year the company is releasing a few smartphones again, although leaving behind the surname ‘XL’ to join the fashion of the ‘Pro’ versions. Although confirmed, the Pixel 6 and Pixel 6 Pro have yet to be officially announced (the presentation is scheduled for October), but we already have enough details thanks to Google. Of course, again, it looks like Google isn’t going to launch them in Europe.

To the advancements that Google has shown (which were not uncommon), we’re now adding one more detail that will come with the Pixel 6 and 6 Pro. We talk about their wallpapers, a gallery of 12 very striking illustrations And with a very summery style that you can now download courtesy of the XDA developer team.

These are the wallpapers Pixel 6

Google has yet to release the wallpapers for its next smartphones, but in XDA, they know them all and they managed to get the images directly from the google wallpapers app. How did they do it? Trick the app with the properties of the Pixel 6 Pro, so that the app thinks it is accessible from that device. 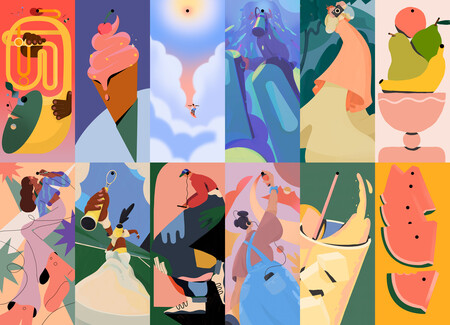 As we said, it is in total a collection of 12 images, all with vector illustrations which represent various motifs with a rather summery theme; fruits, scuba diving, ice cream cones and various characters using a mobile. The terminals are expected to hit stores towards the end of the year, so this style can be a bit dated.

, therefore, they may not be completely correct on all devices. You can download them directly by opening the images in the gallery that we leave for you below.

The great novelty of this generation will be the Google Tensor chip, the first SoC developed by Google and that promises better hardware and software integration. Another novelty of the future smartphones in the Pixel range, the 90 and 120 Hz OLED screens with integrated fingerprint reader.

The art of Michal Dean

where to find everything we need from apple

where to find everything we need from apple