a really short Beat’em Up, but totally faithful to the Looney Tunes style

Maybe just maybe Space Jam not the best movie ever. Of course, I recognize that every time I see it I enjoy it like a child. His way of reclaiming the humor and animated style of Looney Tunes and gradually lead the viewer to an amazing basketball game with Michael Jordan how MVP still looks like to me an absurd genius.

I will not deny that my expectations with the sequel are not as high as they should be. It may be a matter of age. However, I await your arrival with certain illusion. And if in his day I went to the preview of Space Jam taking classes the next day, I just got ahead of myself a bit upon the arrival of Space Jam: New Legends to the billboards thanks to your official video game. How to resist?

Born of an ideas contest

promoted by Microsoft itself in December last year, Space Jam: New Legends, the video game, is positioned as a Beat’em Up cheeky classic cut in which we will control Bugs Bunny, Lola Bunny and of course, LeBron James, the new NBA superstar who will share the limelight with the crazy characters of Warner.

And, even though his promotional character he is quite cheeky, he knows how to channel – in his own way – the true essence of the arcades from which he is inspired in a very palpable way. Above all, two players or more.

Go ahead that Space Jam: New Legends, the video game is not up to Cadillacs & Dinosaurs, Streets of Rage O Double Dragon. Of course, its winks, its animations, its combat system and even its way of embracing the local multiplayer make it a video game that will steal a smile from everyone who left the hard in the arcade. And, in the process, it delivers by serving as an appetizer and ambassador for the return of the Looney Tunes to the big screen.

A really short Beat’em Up, but true to Looney Tunes style 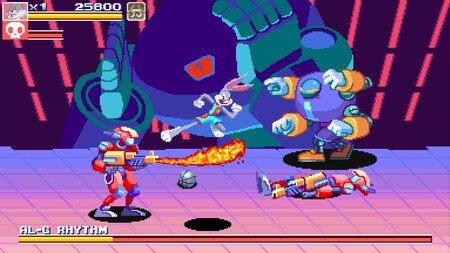 Unlike the official game from the first movie, released on the original PlayStation, in Space Jam: New Legends, the videogame the theme of basketball is left more or less in the background to plunge fully -and without complexes- into the classic formula of the me against the neighborhood popularized in arcades. And that, no matter how you look at it, it is a success.

As we mentioned, Warner was open to suggestions and proposed to the fans themselves to choose the theme of the official game. The winning idea: a Beat’em Up lifelong, with an artistic and playable style that very intentionally evokes the classics of Capcom, Konami Y DataEast, but -and this is key- whose animations are 100% Looney Tunes.

Although, in a way, we have become accustomed to the scheme of Final Fight in which one character stands out in speed, another in brute force and the third is more or less balanced, the truth is that in Space Jam: New Legends what really sets Bugs Bunny, Lola Bunny and LeBron James apart, their three selectable leads, are the animations of the attacks. A) Yes:

Although Bugs He is capable of making lariats as Zangief (or Haggar) defends himself at all distances and distributes himself with his boxing gloves. 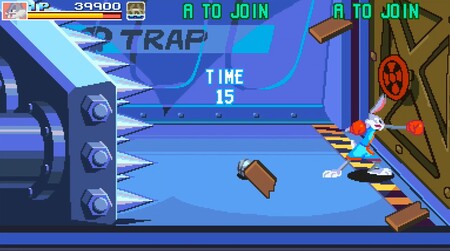 Lola it makes use of all kinds of gadgets, utensils and ACME brand inventions (of course), and although it is the smallest of the three, it just hits just as hard as its peers. 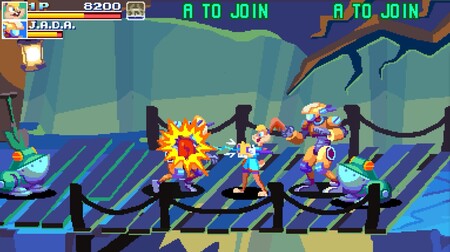 And, as expected, LeBron James has a repertoire of blows on horseback between the beat’em ups classics and basketball games. Maybe it’s the least fun to see in motion, but it is the contrast that the game needed. 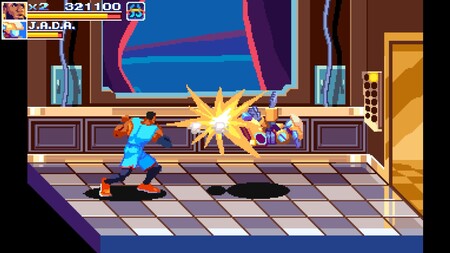 Ahead, practically a dozen levels blatantly inspired by the clichés of the recreational: from the promenades and the secret laboratories to the not so abandoned mines or the much-needed elevator phase. Of course, in all scenarios we will see various nods to the Warner universe

: If we trust the museum we will see the costumes of Pedro and Vilma Flintstone!

Regarding the rest of the Looney Tunes characters, they appear as unlockable cards, so if we use the Roadrunner we will temporarily gain speed, Tweety will give us an extra strength or Granny will fill the floor with cakes and trinkets with which to recharge our health bars. Needless to say, the latter is the most interesting, especially if we play alone. 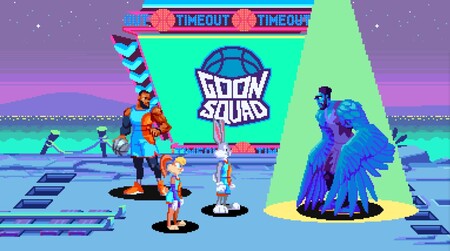 As expected, every certain number of levels the final bosses. Four to be exact, if we do not take into account an armored door that we must break down before being smashed by a trap. A couple of members of the Goon Stars and, as the finishing touch to the game, a robotazo piloted by Al G. Rhythm, the villain of the movie. A very moderate number of large enemies that, in a way, illustrates the duration of the game itself. 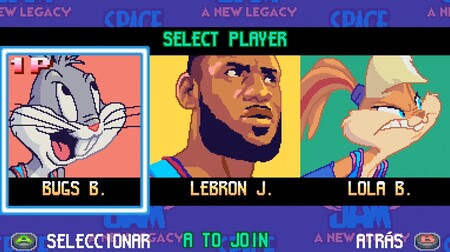 Without trying too hard, it is possible to complete Space Jam: New Legends, the video game in just over half an hour. Posed like this it might seem very little, but it is worth bearing in mind that the duration of other great references of the Beat’em Up classic like Cadillacs & Dinosaurs or the mythical Final Fight he was seldom on time. Unless we had one of the buttons on the cabinet damaged, of course.

And although it would be unfair to say that the official video game of Space Jam: New Legends it ends in a sigh, nor does it manage to fill like the titles it is inspired by. Partly, perhaps, because we have unlimited continuations, but also because almost all levels are linear and relatively similar at the level of color and design. Luckily, arcade gameplay knows how to give the set a certain replay value, especially with two or more players. 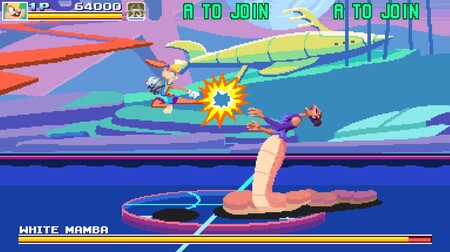 As in the recent Battletoads from Microsoft, Space Jam: New Legends, the video game offers the possibility of playing on the same console and on three controllers. And not only that, only when sharing the game the elements related to basketball appear, integrating into the shared fighting style of Bugs, Lola and LeBron.

As in others Beat’em Ups classics, the true madness on screen manifests itself when sharing a game. And it is a pity that there is no online multiplayer system. However, we are given a couple of good excuses to resume the game once completed: in addition to the traditional mode Boss Rush, we will have to play a little more to get all the cards from Looney Tunes.

That which, Space Jam: New Legends the video game It is not a blockbuster, but neither is it a light experience or the typical minigame promotional. In fact, Warner prepared a free pinball of the movie that can be accessed from the official website. The film’s official video game is a short Beat’em Up, yes, but also a complete video game. Which does not mean that, in a blatant way, it is an aperitif of the film.

Space Jam: New Legends the video game It can be played for free from July 15, on the eve of the film’s arrival in cinemas. In it you will not find any surprise or spoiler of the animated and sports festival that will take place on the big screen, but you will find a reunion with a formula of street fighting pixelated that triumphed in arcades and that, to be honest, It looks great on the Looney Tunes.

definition, characteristics and how it influences devices

definition, characteristics and how it influences devices