Beyond the Light, the expansion that lays the foundations of what the game will be in the future

I would like to end the year talking about Destiny 2, whose last (and long-awaited by me) expansion arrived on November 10 and we are on December 31 and I had not been able to talk about it yet and it cannot be and I have to stop chaining sentences and get on with it.

Let it be clear from the start: Destiny 2: Beyond the Light not the best expansion in the game. In my opinion that honor remains in the hands of The Renegades, but it is tremendously fun. At the plot level I lost time, which does not prevent me from enjoying all its madness and characters with each new expansion, but at the playable level the thing is still as high as ever.

Beyond the Light is alrightIt is entertaining, but it has neither the Forsaken charisma nor the former’s taste for doing something truly different within the game’s own mechanics. Bungie shined like never before in that expansion, launched two years ago, and it would be nice if it could reach that level again at some point.

What I wanted was to get my hands on expansion so that I could test the new subclass of Estasis. I really enjoy my Titan (I am one of those, yes) in any of its flavors, whether I start throwing fire hammers or electrocuting the bad guys by falling on top of them with the force of a thousand stars or blasting them with vacuum shields. released in true Captain America style, but a new subclass after so many years with the same? HELL YES.

And it goes, and they don’t give it to you at the beginning.

I had that hope, I thought that shortly after starting the expansion the game would give me the subclass as a good friend, but no. Destiny 2 He does a very evil thing but that makes sense: he lets you try it while you advance in the new campaign so you can see what the thing is about and, when you are in full swing, he takes it away from you.

Yes, of course, that precisely the part of the story that tells Beyond the Light is directly related to the meaning of Stasis, a power that comes from darkness (being the guardians beings of light and more beautiful than everything) and the danger of using it. A little like you’re a jedi flirting with the dark side, something that has never happened …

Total, there are a handful of missions and new bosses and until you complete the campaign you do not take Stasis. That I have not said, but it’s a power based on ice that allows you to freeze enemies and create frozen walls with tools. You can even create steps by throwing Stasis grenades at the walls, which comes in handy at the mobility level.

In conclusion: the new subclass is cool. And it also introduces more customization than we already had, adding a system similar to that of the mods that already have weapons and different parts of the equipment. We’ll see how it evolves over time, but things look pretty good.

At the level of history … well, if I tell you the truth, I have already forgotten the details of what this expansion tells. As I said at the beginning, it is very easy to get lost in its extensive lore And, in the end, it is not that it matters a lot when it comes to enjoying the game. Cool when you live these stories for the first time, when they tell you and freak out with some details, but also cool when you forget and go in daily just to do activities and enjoy their excellent gunplay.

With everything and with that, I liked the role it has assumed here Variks, who has also become one more merchant of those who give you adventures and contracts, and get to know his history a little better. Basically you have to throw a cable and break the face of other Eliksni, captained in this case by a certain Private, and defeat another handful of bosses along the way.

The confrontations with these bosses are interesting, but again I remember how this was raised in The Forsaken and the thing pales. Where this expansion does shine at the narrative level is in the importance of some data that is revealed to us, as the true identity of The Unknown (I’m not going to reveal it, but I was more than pleasantly surprised to find out who he is and how he fits into the lore), or how Bungie wanted to give the characters a somewhat deeper personality, specifically Eramis, a through dialogues with which they let us know their motivations, their past and the reason for their actions. 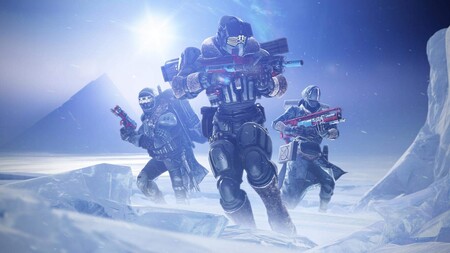 That several planets have been loaded, hey. I know that many of those who have played little or nothing at Destiny 2

they put their hands to their heads when they found out how a game like that loaded a lot of content that has been adding over the years. Several destinations have disappeared and, with them, a handful of activities that took place in them.

The truth is that the game needed to put order. It had grown too much for the developers, who had it worse and worse with so many things to manage, as for the players themselves. I myself was overwhelmed by the enormous amount of things I had to attend to if I wanted to get everything more or less up to date. Alright there bungie.

On the other hand comes Europe, a new destination in the form of the frozen moon of Jupiter that has turned out to be beautiful. It is large, has many locations, and its inclement weather makes for snowstorms that even leave the player without knowing where he is. I already say, maximum beauty.

With this moon, new enemies have also arrived, among which are some large and heavy robots. Heaviness in several ways, especially in terms of not leaving us alone with the damn missiles. There are also some very annoying and threatening new Vex that are nice to end up with, of course. All for the good of the show.

There are also novelties in the weapons, in the equipment and in the way of managing the mods, in general everything aimed at being able to customize in greater depth the way we want to play, but the essence of Destiny 2 is still intact. What is cool here is unlocking the best weapons, ideally with the best advantages, and generating the most absolute chaos both in cooperative activities and in the Crucible against other players.

Beyond the LightIn short, it seems like a good starting point for what is to come, for that promised new stage of the game. After having made a kind of clean slate, with all those destinations, activities and weapons that have been loaded Bungie, the future of the game looks promising.

excellent for google assistant and very good for others

The shortage of electronic components until mid-2022?

Let’s Sing 2022: Head to LeStream to Sing with the La Musique Team this Thursday!

Uncharted: Legacy of Thieves Collection has a PS5 release date, and it will still land on PC in 2022