Complete Ocarina of Time being blind, beat Mario 64 without jumping … these are the 14 greatest crazy things done by players

In all the years that we have followed the video game industry, there is an element, a fundamental pillar of it that is indivisible from it. Players are a essential part that makes up video games. Without them, the games would be meaningless.

That is why many stand before the challenges and challenges proposed by your favorite titles. They even make up their own. We have seen feats of all kinds, almost impossible, that have amazed us throughout this time.

That is why here you will find a selection of real crazy things performed by the players. Settle in and prepare your surprised face; you will use it often.

Reach level 100 in Kingdom Hearts without leaving The Destiny Islands

210 hours and 44 minutes. That was how long the Twitch streamer used AaroneousGaming to farm the necessary experience to reach level 100 with Sora in Kingdom Hearts.

However, the condition that was imposed was titanic: do not leave the Destiny Islands. This scenario is basically a tutorial area where you can face a few characters from Final Fantasy como Wakka, Tidus o Selphie.

At the beginning of the game, when you defeat them, you accumulate a few points to level up. The problem arises the more Sora levels up, as he needs thousands of points to reach the next level. A feat full of patience.

Completar The Legend of Zelda: Ocarina of Time siendo ciego

Terry Garrett, a blind player, managed to complete The Legend of Zelda: Ocarina of Time four years after starting one of the best games in history. In Extra Life we already dealt with his story in his day. Garrett started his departure on May 8, 2011From that point on, he dedicated himself to uploading videos to YouTube showing his incredible ability taking into account his limitations.

To complete this chimera, Garrett used the sounds of the game to navigate his virtual environments, which is why two speakers were placed very close to know the origin of the effects. Under these conditions, Terry Garrett used an emulated version with which he could create instant save files and continue his adventure through trial and error.

Build the most efficient city in Sim City 3000

It may sound simple a priori, but it is not the case. Sim City 3000 is a city-building video game that allows you to take numerous directions when determining how you want the city you are going to build to be. It was at this point that Vincent Ocasla, a 22-year-old architecture student living in the Philippines, decided to get serious.

Vincent’s goal was none other than get the most efficient city ever built. To perform this madness, he spent 4 years between equations and graph paper to build a totalitarian urban hell called Magnasanti, in which six million inhabitants lived together.

Vincent had to give up numerous elements characteristic of a modern society such as hospitals, leisure … The life expectancy of its population barely reached 50 years and they were working practically all day. It doesn’t look like we’re moving to Magnasanti anytime soon.

Complete Pokémon Ruby with a Magikarp

As you read, get to pass the Rubí edition of Pokémon With what is probably the weakest Pokémon in the entire Pokédex is insane. Well this is what he did for 6 years, between 2011 and 2017, Leomon. This Youtube user dedicated himself to this task with a single combatant, a Magikarp.

To carry it out, patience was his greatest virtue, since his strategy was based on the following: constantly heal the Magikarp and deplete the enemy’s PP. At this point, the opposing Pokémon could only damage itself, ending up defeated in battle. So for 6 years of authentic video game suffering.

He ended the game with the most powerful Magikarp in all of Hoenn and at level 75. Now he can chulele in the neighborhood by showing his game.

Speedrun from Super Mario Bros. in less than 5 minutes

Surely the time in a speedrun better known by everyone, when it comes to the game that it is. We are talking about having the 100 meter dash record in the world of video games.

The Youtube user, Niftski, just a month ago lowered the time to 4: 55.430. At this point, the difference between shortening still a little more is in one or two frames. As you can see below, the pressure is maximum.

Complete a Super Mario 64 level without jumping even once

. This is the name you use Scott Buchanan In Internet. We are actually talking about one of the greatest experts in Super Mario 64 that exist.

That is why he planned the following idea: not to jump even once. The game that forever changed platforms and the way of watching video games is based mainly on that, jumping. Scott decided that he would not press the A button to clear the Bob-omb Battlefield level. and thus get the star.

To do this, he carried out exhaustive studies, checked all the mechanics of the title and planned his movements. Although he used the assistance of an artificial intelligence, that does not detract one iota of value from the challenge. Here you have the result; amazed.

The most complex maze ever in Rollercoaster Tycoon 2

Their objective was to check how long it would take an NPC to complete the hedge walls. Had to wait a bit barely 263 years in the game to see how Regina, one of the unfortunate characters who entered the labyrinth, managed to escape. Attentive to the work of a maniac. 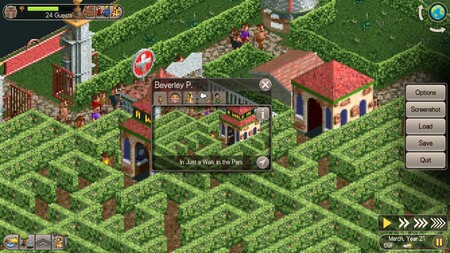 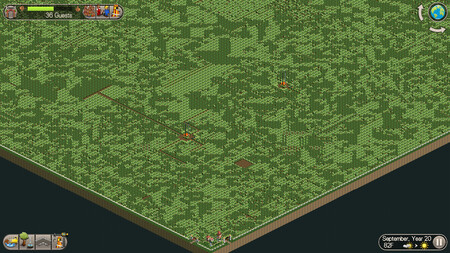 As it is. gbbearzly he set up a program to be able to use voice commands in Hidetaka Miyazaki’s work. The complexity of the proposed task is greater considering that the program takes a second and a half to execute the command selected.

Does not matter. It took just over 30 hours for gbbearzly to finish the game. More than 500 deaths later, you can be proud of accomplishing what many haven’t: finishing a Dark Souls.

Overcome Skyrim using only your fists

Give up weapons? Few ideas are more noble than that, except if the weapons are your own fists. Robbaz decided that his bare hands would be enough to face all the dangers lurking in the world of Skyrim.

Through improving certain skills and getting the right armor, Robbaz became an unstoppable tank. Not even Superman dreams of having the strength that his character possesses in his arms.

January 29, 2014. That is the date marked in the history of the space MMO Eve Online. The reason is very simple: $ 330,000 was spent on one of the most massive battles your universe has ever witnessed.

For 21 hours, 7,548 players gathered in the B-R5RB system, in the Immensea region. There, one faction claimed its right to collect a late payment from another. This is because in Eve Online it is possible to use real money, which allows an economy of its own.

The damages in the war were numerous: 75 Titan ships, one of the most impressive in the game, were annihilated. The record up to that point was 12 Titans destroyed in one fight. Each of these ships has an approximate cost of $ 2,500. Get an idea of ​​what happened that day. The Battle of Asakai it is also considered one of the bloodiest in its history.

Greenfield, the most impressive city in all Minecraft

Talk about Minecraft and imposing structures is the daily bread. Nothing surprises anymore. Until you discover that more than 400 people have collaborated in the construction of the most incredible megalopolis of all.

More than 9 years later, it is already possible to visit Greenfield. 20 million blocks later, the city is colossal, vast, and still not finished. According to those responsible, they have barely reached 20% of everything they want to build. Crazy.

The Plague of Slimes in Ultima Online

Last Online it was one of the first video games that included a multiplayer facet in the world of RPGs. One of its most particular characteristics was the possibility of accumulating hundreds of items in a game box, whether they were enemies or objects.

Chrae, a user of the title, decided to take advantage of this to produce unparalleled mayhem. He put a couple of slimes (enemies of Ultima Online) in his house and began using grenades against them. These suffered the damage, so were divided exponentially.

Finally, he accumulated 100 slimes for each unit of soil in his house. So at such a squeeze, he opened the door wide. No one could resist the tide; no matter what level you possessed, you fell to the attacks of the slimes.

The servers crashed and Chrae threatened the development team with repeating the action if she did not receive 10,000 in-game coins. The workers didn’t believe him, so Chrae did the same thing again days later.

The developers finally opted to release an update that prevented slimes from being split. The impact of this story was such that the rest of the games that came in the future learned their lesson and prohibited any enemy from dividing or accumulating.

The largest collection of video games in the world

Not all crazy things happen in the virtual world. And if they do not tell Antonio Monteiro, which accumulates more than 20,000 games at his home in Richmond. Since he was 12 years old, getting each and every one of the works he saw.

Eight days it took to count and verify the organization of the Guinness World Records each and every title. More than 100 consoles accompany you and your favorite game is Castlevania IV. Any gamer’s paradise.

Earn all World of Warcraft achievements

A real odyssey. This is the only way to qualify what Little Gray, a player from Taiwan, achieved in 2009. Nothing more and nothing less than Obtain all 986 achievements (of the time) in the MMORPG most massive ever.

The players of World of Warcraft they witnessed this feat. Now, with the arrival of new expansions like Shadowlands, it is increasingly difficult to repeat success, although he can always say that he was the first to achieve it.

Samsung Galaxy Unpacked: The most important announcements in under 15 minutes

All the details of Samsung’s new flagship smartphones