date, time, participants and how to watch the Ibai Llanos cooking program

The time is coming to crown the best couple of streamers who have passed through the kitchens of Disaster Chefs, the program created by Ibai Llanos that is about to celebrate its grand finale. Over several weeks, a total of four programs have been carried out in which a different couple has been proclaimed the winner in each one.

They will all face each other in a final that will be held on March 29 and that will be presented by Ibai and Masi himself. However, this time the program will be more special, because apart from meeting the winners, the best couple will take a total of 40,000 dollars

Date and time of the Disaster Chefs Grand Final

As we have indicated, it will be on March 29 when the Disaster Chefs Grand Final will be broadcast. The time the program will start will be at 8:00 p.m. in Europe (1:00 p.m. in CDMX), with a duration that is expected to be between three and four hours.

Where to see the Disaster Chefs Grand Final

everyone will be able follow live the final from the canal de Twitch de Ibai. It will only be enough to connect at any time to see the chaos that will arise in the kitchens, so it will not be necessary to be subscribed to the channel. Also, if you miss the program absolutely nothing will happen, because once it ends it will be re-uploaded in full Ibai’s YouTube channel 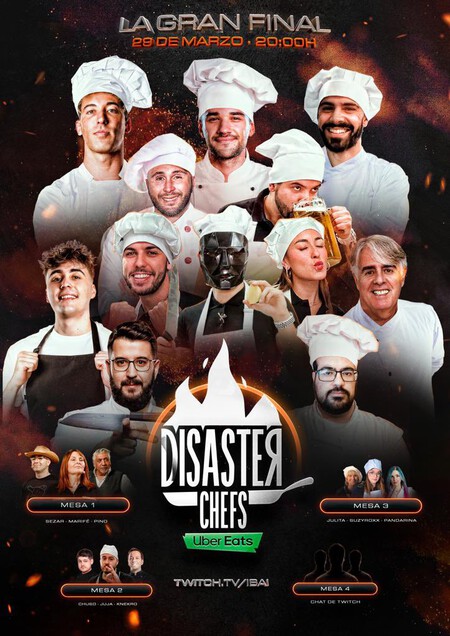 As in the previous programs, they will be six couples that will face each other in the grand final

. Two of them have been picked up by the public in a vote was heldwhile the other four will be the ones that won in the programs already broadcast:

A great novelty of the Disaster Chefs grand finale is that this time the jury in charge of assessing and tasting the dishes will be more numerous. It will be made up of a total of three tables, with three judges in each of them, although the Twitch chat will also participate in this vote.

Well-being: relieve your back with this ultra-comfortable ergonomic chair on offer

an “other world” discovered in Zelda BOTW

Well-being: relieve your back with this ultra-comfortable ergonomic chair on offer