In a sibylline way, Square Enix is filling the Xbox Game Pass with great games: not too long ago they arrived Octopath Traveler and all the Kingdom Hearts saga. In April, its subscribers were able to play Outriders since launch. And in May? Another essential: nothing less than Dragon Quest Builders 2.

After passing through PS4, PC and Switch, the outstanding Construction RPG It will make its debut through the big door in Microsoft systems: it will not only arrive on Xbox Series X, Xbox Series S and Xbox One, but it will also be added to the catalog of Microsoft’s PC store. And beware, with an added incentive: the function Xbox Play Anywhere.

What does this mean about Play Anywhere? Basically, that everything that we progress and build on consoles we will find right where we left it when opening the game on PC thanks to the cloud saving system. And the same applies to the opposite case. A premise that, everything is said, makes a scandal to Dragon Quest Builders 2.

As a point to consider, those who are not subscribers to the Microsoft service or simply wish to have Dragon Quest Builders 2 Ownership, they can get the game for 49.99 dollars, or 39.99 dollars if we apply the discount of 20% of the Game Pass.

On the other hand, we won’t have to wait too long to play Dragon Quest Builders 2

on console or PC: as shown on the game’s website from the Microsoft Store, the game will be playable on Xbox and PC from next May 4. What’s more, if you get impatient, you can start the pre-download.

The saga Dragon Quest it is considered the maximum benchmark of the JRPG in Japan and, little by little, its presence in the West is increasingly known. Not too long ago it was released a tactics experience for mobiles

and very soon a new adventure based on the new anime will follow suit: Dragon Quest The Adventure of Dai.

Regarding Dragon Quest Builders 2, we can consider it an anniversary gift for Game Pass subscribers that will arrive in advance: at the end of May the 35 years since the first game was released of the saga on NES. 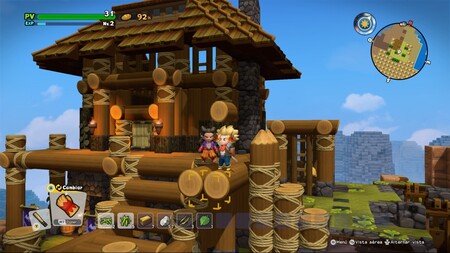 The month of May has not yet started, but Xbox players can already celebrate its arrival: Dragon Quest Builders 2 is a great game. A hilarious adventure, with a very special charm and the always grateful visual touch of Akira Toriyama, creator of Dragon Ball.

Taking into account the trial period of Xbox Game Pass and this new addition to its catalog, we can only come to one conclusion: in May, the one who gets bored is because he wants to.

Because of Warzone, the reveal is again late

Starting today, you can play the multiplayer pre-beta version of “Company of Heroes 3” for free

Final Fantasy XIV Endwalker: Zott’s Tower, our guide to the first dungeon in the FF14 expansion

Because of Warzone, the reveal is again late