after having paid five million dollars to the All In! Games. A lot of news awaits the share title in the coming months, as the company has well advanced when publishing the roadmap of the contents that will arrive this year .

It indicates the addition of an HJardcore mode, a winter pack or the launch of the version for Luna, Amazon’s streaming service, which are things that are already available. During the spring new cosmetic content will arrive and also a photo mode and a kill run mode in which players will have a limited time to beat the levels. 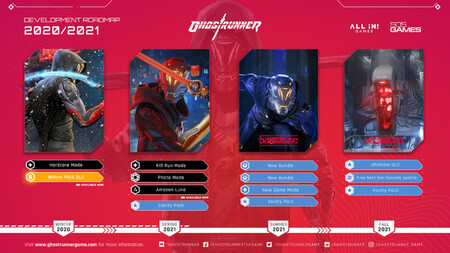 Already entering in summer It is expected that a couple of packs will be enabled, a new game mode and also a DLC with more cosmetic items that will be paid, although in none of the cases has it been specified more fully what surprises will await in each one.

Finally, in autumn What is said to be the definitive downloadable content, another pack with more cosmetic items and a free update for next-gen consoles will be released to make Ghostrunner look even better on PS5 and Xbox Series X / S. Until then, you can get hold of it on PS4, Xbox One, Nintendo Switch, and PC.

The first images of the new Call of Duty: Warzone map are filtered

The first images of the new Call of Duty: Warzone map are filtered