My wife says that in one of these somersaults I’m going to kill myself, and by rereading the headline of this text I can understand why. But don’t get me wrong. I swear behind the mix between catfish fishing and Magic: The Gathering there is a logical relationship. At least in my already upset head.

In one of those pirouettes of fate that seem to have been done on purpose, last week my departure from the front door coincided, in search of the train that would take me to Madrid for work, with the arrival of one of the many delivery men I already have. put face – eyes, actually, but that’s another issue.

In his hands he carried a package that he had been looking forward to. Inside, if nothing was twisted, would be the first letters of Adventures in Forgotten Realms that they would touch my hands -among other things- and, with it, also a leap of more than 20 years between the physical letters that that box of my first Magic Chronicles and current cartons. 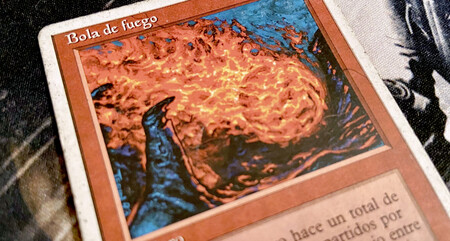 Faced with one of those soporific trips by AVE that, a little out of boredom and a little because of my irrepressible desire to stay alone in the wagon by sending some to catch wind and throwing a Fireball at others -the people who speak screaming, why? – the idea of ​​spending the trip glancing at my new letters it seemed most hopeful.

What was aimed to be a journey where I prayed to fall asleep had suddenly turned into what would probably end up being the most entertaining time of the day. Ahead of three hours of travel in which open envelopes, study charts and see to what extent you could create a deck own with them.

How to transform a boring trip

With a smile put on by hope, I head to the car and, by taking advantage of the time, in my head another of the pending issues that I wanted to get rid of during the trip begins to be managed: organize some more than deserved family vacation so that we all get to disconnect from a complex year.

Time between the round trip It could well serve to finish clarifying ideas, looking for information and closing a trip that, due to knowing the delivery people only by the eyes, was much more complicated than usual. The plan was nature, disconnection and looking for alternatives that were not bursting with people to try to avoid as many risks as possible.

Luckily, the previous weekend we had been in the Sau reservoir, one of those reservoirs that were made in its day, flooding the area where there used to be a town. In the most picturesque way possible, the bell tower of the old town loomed over the water depending on how much or how little it had been filled in the previous months.

Avoiding the mess of any Mediterranean coast that comes to mind, we find something as close as possible to a private beach. Fishermen at one end and a supply rental area with the typical slide scooters at the other.

In my head it sounded perfect. Between scooters with slide and floating logs in the morning, teaching how to play Magic to the kids after eating to avoid the heat, visiting the area in the afternoon to see charming little towns and, at night, back to the reservoir to fish – another of those activities that I played as a child with the tip of the fingers and wanted to experience again. 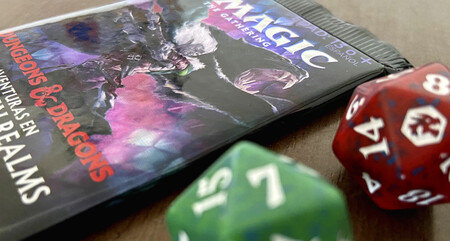 With my mind and feet in automatic mode, as I skip from one topic to another, I end up almost without realizing it with my ass on seat 10A of car 7, intending to find a reservoir place in which to pass the holidays and the first Magic envelopes that have passed through my hands in a long time.

With the emotion of a child on Christmas morning I proceed to look at letters while recording in my head that I should write to my wife to tell her: 1) that I am already on the train, and 2) the plan for the next vacation.

From the first envelope I take out a Isla and it amazes me again how small the letters are. I get lost in the shine of the water and that art that would look great framed. It also comes to mind that I should broaden the search to more than just a reservoir. The island is out of budget, but why not a river, or a natural lake.

The next one is also blue. Capture sphere, it’s called. It is true that they seem brighter, but I no longer know if mine were also brighter in their day and they have lost that touch. It doesn’t seem like it, of course. I think it is a joy to have a card in your hands that does not have the edges eaten away by the passage of time and shuffling. “Flash. Enchant creature. What the heck is flash?“ 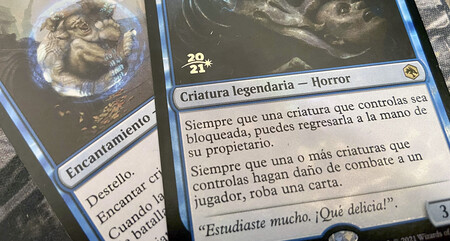 I stop and think of the letter that accompanied one of the received sets, one of those with brilli brilli that in its day would have called foil but whose current term I do not know completely. Grazilaxx, illicit scholar. A giant torpedo who seems to be sucking the head of an anguished man.

“Normal, how disgusting to have a catfish on the head“. Have you ever seen a bug like that? No, sure, if that’s only in America’s rivers and fishing games, right?”Will there be catfish here? What would be cool to take the kids fishing and end up with a giant catfish like the ones in

I make a necessary stop here to emphasize that, seen in retrospect and with better lighting, the friend Grazilaxx looks like a catfish like an egg to a chestnut. I could have thought of an octopus, or even fishing for Cthulhu, and it would have made more sense, but my myopia and nerd work like that. I saw sticky mustaches coming out of his mouth and my mind went to the catfish because, why fool us more, it is very probably bad in the head. 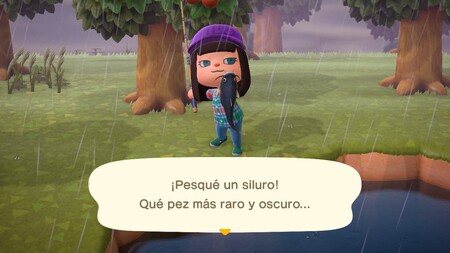 The impulse to start looking where to fish catfish has all the will that is usually lacking in any logical activity necessary to survive. But to my surprise there are not only catfish in Europe, there is also an Ebro reservoir with a spectacular population of the also known as river monster. Sexy critters weighing more than 100 kg that exceed 2 meters in length are waiting for you in your area.

“River monster. There must be a letter from Magic with a similar name or a catfish as the protagonist“But no, either it doesn’t exist or I’m unlucky with the search. Too bad.

Hey what Flash? What the heck is Flash?

A quick search gets me out of doubt: Flash implies that it can be played as an instant. That is, it can be cast on the opponent’s turn even if it is not an instant. “And why not call it instant?“Because there are creatures that also have Flash, and, for example, you could trick your opponent by casting them before their attack into a blocking phase that he was already taking for granted.

The unexpected evolution of Magic

The idea does not occur to me based on reading the description of that new mechanics, mind you, I find it in one of those forums in which, beyond explaining how the flash works, I come across a message that makes me rethink everything that has happened in my head in the last seconds (yes, actually almost all of this has happened in one breath. I have already told you that my brain works regularly, at 200% to nonsense and 10% for everything else). The message, from someone like me who had not understood the mechanics and was looking for help, read something like this:

“Unfortunately I don’t know anyone who plays, so I can’t debate these things.” 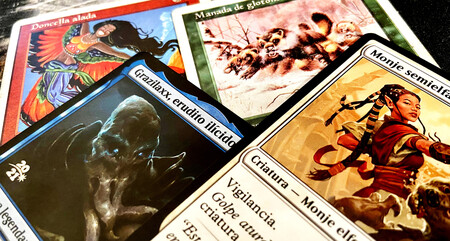 My head clears and I begin to think about what I have experienced during these last weeks, the old and the new letters, my jump to the sand… I realize that the evolution I am experiencing is not only in the game itself. With more or less mechanics, with more or less understandable words, this is still the same card game that a friend invited me to try and I refused to go flirt.

Of course it has changed. Two decades have passed! But the greatest evolution is not in the game, and not in my way of seeing it. That Magic Now it is different -for better-, it is the fault of the same reason that I have discovered in a matter of seconds that I can fish a catfish in the Mequinenza reservoir, that the species was introduced in 1974 and since then it can be fished during the holiday period by pellet fishing.

In the same way that to know more about catfish fishing 20 years ago I would have had to resort to a specialized fishing store – and I think that even then I would have had problems getting the information I was looking for staying close to Barcelona – the idea of learn, know, play and share Magic -especially sharing- was just as complicated before.

What was once a population of two geeks per class who might be interested and, if you were lucky, also a dozen kids playing it in a comic shop and neighborhood Warhammer, is now the whole world within reach of a click.

It is not just being able to play Magic Arena With someone who lives on the other side of the globe, it is to get excited about how lucky a content creator has had to open an envelope, download the deck created by a tournament champion, or make new friends among those who two years ago did not have the most remote idea of ​​how Flash’s mechanics worked.

The cards may seem smaller to you after your hands have grown a few inches more, and that their shine looks more because they are treated with that affection that gives you maturity, but it is still the same game that you fell in love with in its day. The same, but bigger.

The only difference is that it is no longer limited to the friends you can convince to play – or how well you can bribe your children into playing with you – or how close the nearest specialty store is.

Now Magic it is, at the same time, the same and something else. It’s the same game but with more players, tutorials, possibilities, decks, spells, snapshots, critters that look just like a catfish, and, of course, creatures with Flash.