To Caesar what is Caesar’s: Capcom is on a great streak. And even though Monster Hunter Stories 2: Wings of Ruin, their big summer release, derails from the traditional and successful formula of Monster Hunter, The truth is that as an adventure it dazzles, as JRPG works wonderfully and, most importantly, retains all the essence of the original saga.

Because the sequel to Monster Hunter Stories It has everything you could ask for from a good JRPG, including protagonists who radiate their own personality, epic turn-based combat, beasts of all shapes and sizes, and exotic landscapes that beg to be discovered and explored on more than one occasion. And, in the process, he gives us a perfect adventure to enjoy in summer.

At first gl ance, it might appear that Capcom borrows both aesthetic and playable elements from hit sagas like Dragon Quest

, the Serie Mario & Luigi, Breath of Fire or the most recent deliveries of Pokémon. And it is unquestionable that there is much of the three. But the truth is that Monster Hunter Stories 2 always sweeps home to offer the player an adventure that is 100% Monster Hunter with a great peculiarity: in this story the monsters they will fight by our side.

The central theme of Monster Hunter Stories 2 It is, in essence, the bond that we establish with the wyverns and other creatures closely associated with the saga that, for the occasion, we will refer to as Monsties. Said like this, it might seem that it is a spin-off that seeks to go in the line of Pokémon, but the reality is that Pikachu and company should take good note of Capcom’s game in many respects.

First of all because, despite the title of the game, in Monster Hunter Stories 2 we are not hunters, but Riders. And that will not prevent us from facing huge creatures – it would be more – but it will allow us to fight alongside an intimidating Rathian, go out to steal eggs with a Kulu-Ya-Ku or ride on the back of a majestic Anjanath. And in all the above examples, the show is more than assured.

The legend of Ratha Kalapteron, the monster with the wings of ruin 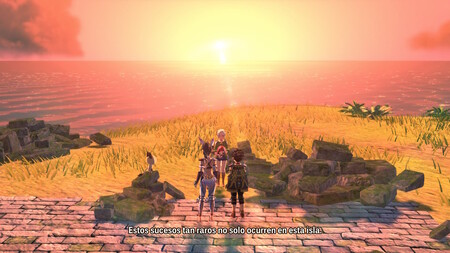 Hakolo Island shares many of its creatures with those of the Kamura village or those found in the New World, but its landscapes are very different and its customs quite different: in Mahana village there are no hunters, but riders, and their ties to monsters make them an open-minded and peaceful civilization. At least, until the color of the water changed.

A mysterious event has led to the disappearance of the rathalos from the island. At the same time, the great wyverns and other powerful creatures have begun to manifest an unusually violent nature. In another era, the intervention of the brave Red and his mount would have been enough to contain this threat. Luckily, his grandson, the protagonist of Monster Hunter Stories 2, has inherited his will.

With Ena, a Wyverian who first met Red during his glory days, the hero of Mahana will embark on an adventure in which he will further strengthen his ties with the fascinating creatures that populate the world of Monster Hunter World. And, in the process, your destiny will intersect with that of Ratha Kalapteron, a creature whose wings will one day be capable of awakening both hope and terror. 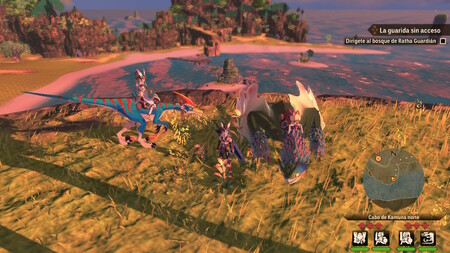 Although the setting of the first village of Monster Hunter Stories 2 is very inspired by the Pacific archipelagos (in the same way that Kamura is in Japan), one of the first advantages of the genre jump from the saga to the JRPG is that, little by little, we will see how the known world of monster hunter it expands with new, increasingly exotic areas that we will be able to travel on the back of our Monstis.

In fact, and as it happened in the Monster Hunter Stories original, there will be specific areas that we can only access with the appropriate mount. Some have the ability to jump, others to swim, others to climb, and some of them will avoid unwanted combats by means of dissuasive shouts. And that makes Obtaining and breeding new Monsties is an essential part of the adventure. 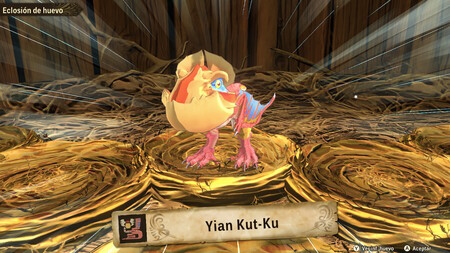 Of course, we will not depend solely on the claws and fangs of our Monstis when facing the different dangers and events of the plot and the world: as in any JRPG worth its salt, in Monster Hunter Stories 2 we will have to arm ourselves, dress and constantly improve our equipment and inventory. The huge weapons of the saga could not be missing from the equation. Only, this time, hewe will use them in a different way.

A combat system as fun as it is deep

On Monster Hunter Stories 2 the epic and real-time battles of the saga are parked and offer turn-based battles and teams in the purest style Dragon Quest.

That said, we will not limit ourselves to slashing and hammering at the monsters that come our way: we will fight together with our Montis, both distributing turns and through combined techniques. 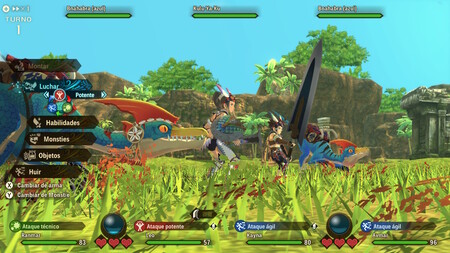 In this respect, the combat system is somewhat reminiscent of the series Mario y Luigi O Paper Mario There are three types of attack technique (powerful, agile and technical) that determine the success of our initiative. And, at the same time, the type of weapon and the place where we hit if it is a large enemy will also influence in our favor or against us.

In other words: as in the other games of Monster Hunter, we must know and have a record of the creatures to be really effective in combat. However, the masterful layout of the menus and a very successful use of direct shortcuts mean that the fights are as simple to carry out as they are interesting. 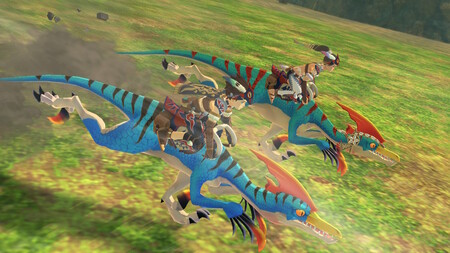 It is more, if we want farmear experience or resources we can always accelerate the pace of battles. Something directly inherited from the Dragon Quest most recent.

With the above in mind, one of the most interesting aspects of Monster Hunter Stories 2 it’s his way of tackle the multiplayer: We can share games with up to three other riders, both cooperatively when exploring and competitively when facing each other. Which, by the way, makes Capcom’s game score whole points like JRPG against the benchmarks it draws on.

For its part, the tone and aesthetics of youth anime started in the Monster Hunter Stories from 3DS and mobile devices is once again present in this sequel, cementing more and better its JRPG roots. And not only that, this works very in your favor through secondary characters that exude personality, humor and a certain mysterious air in according to what cases.

Because if Link has his fairy Navi, our hero will be guided and advised by Navirou,

a rather cheeky Felyne that serves as humorous relief in every match and fight. A troupe that, by the way, will help us choose which monster eggs to hatch and which ones are better to leave in the nest.

As we commented, in Monster Hunter Stories 2 We will share the limelight with the wyverns and monsters of the saga, both when exploring the world and in turn-based combat. We will get to know some of them as the story evolves, while others we will obtain by hatching eggs. And, logically, they all level up as if they were just another character. 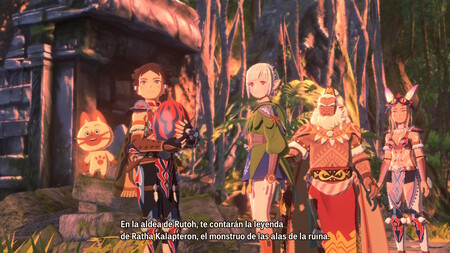 A) Yes, Monster Hunter Stories 2 it is not strictly nor a Pokémon not a Dragon Quest Monsters, but it is impossible not to find some initial parallels that gradually become diluted as the essence of the saga manifests itself more and more. Monster Hunter. Achieving, in the process, a JRPG with its own personality. 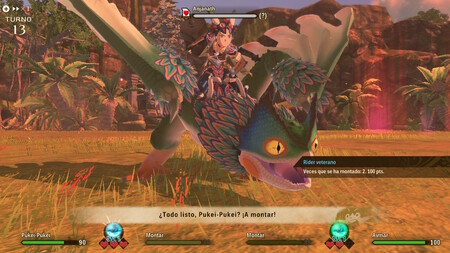 Don’t be fooled by the aesthetics or the title: Monster Hunter Stories 2 is not a spin-off secondary of the Capcom saga or a minor release, we are facing one of the most promising titles of 2021, and it has everything it takes to rank among the best JRPGs in the already generous Switch catalog and Steam’s overwhelming Made in Japan RPG offering.

A new step forward for the definitive settlement of Monster Hunter globally, and a key launch so that the weight of the initials of the saga is balanced both in the West and in Japan. But, above all, it has all the ballots to be that JRPG to which to dedicate your free summer hours.

His laid-back tone, exotic locations, and super addictive turn-based combat formula and crafteo constant of the JRPGs and the saga Monster Hunter make improvising games easy. And the way we design the levels so that we return to them with the right mount means that there is always something interesting to do and a piece of the map to discover. 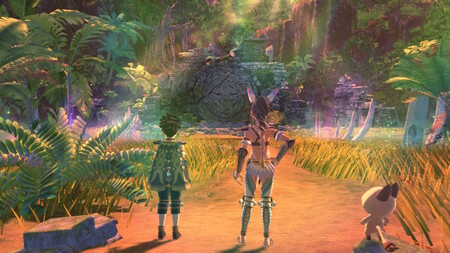 We will have to wait for our final impressions to see if we are facing one of the essentials of this 2021, but everything it already offers is assembled with love and very well channeled. Because if the epic hunts of Monster Hunter We have been fascinated, being able to live adventures with the fiercest and funniest monsters in the saga is not far behind.

Monster Hunter Stories 2 will be available next July 9 on Nintendo Switch and PC and you can now download a trial version from the eShop with the first bars of the adventure. A great way to get ahead of the launch, by the way: Everything you advance and win will be kept in the final version of the game. 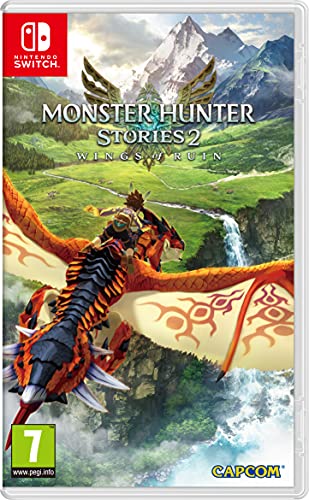