preview with trailer and game experience for PS4, Xbox One, Nintendo Switch and Steam

Of the indies that will come out in 2021, Olija is one of those that will debut before the rest (just like Cyber Shadow), since Devolver Digital recently set its date for the January 28 en PS4, Xbox One, Nintendo Switch y Steam.

I had been following him for a long time, drawing my attention for the use of his weapon. Apart from being Return Digital behind it, it has a guaranteed minimum of quality and what I saw on video I had liked. But he needed to prove it and his demo the Steam he has fulfilled my expectations and I want to continue.

An action platformer with a lot of hook 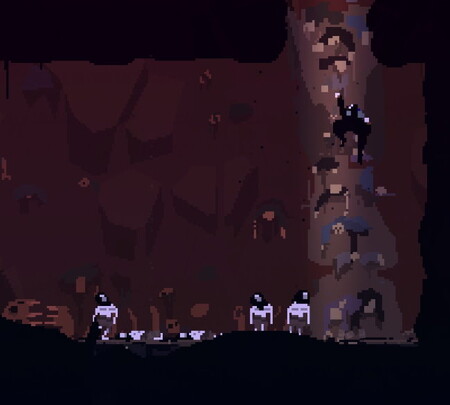 The story of Olija It is about the search for Farady, a shipwright trapped in the mysterious country of Terraphage. There, imprisoned by the Rottenwood clan, he will have to find his way out and rescue the rest of his crew, if he is still alive …

This demo shows a glimpse of that story, dropping that Farady got the legend’s harpoon before he was captured. A harpoon with which he felt a special connection, since he could “call” him to come back to him. And in fact, it is what will allow him to escape from his prison when he sees a couple of guards playing with his weapon, charging them from afar and opening the door.

Olija’s main mechanics revolve around this harpoon, being quite easy to master it in a few seconds: we launch it and we can pick it up, or we can teleport to it by pressing the direction it is in. This will allow us not only to create combos when attacking, but also to increase our mobility to reach areas that are difficult to access with enemies or mechanisms.

These mechanisms are basically eyes that come out of a viscous entity, but totally harmless. And if we take into account that we do not have a double jump or we can climb the walls, we will have no choice but to learn to pull this resource to reach other areas faster or to destabilize the rival, surprising them when they least expect it and finish them off. up close after.

Olija, one of the most promising indies of 2021 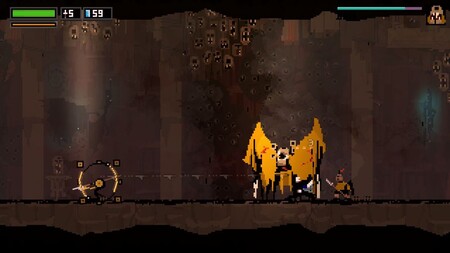 With a minimalist aesthetic section, in the line of games like Crawl, to avoid unnecessary distractions, Olija It mixes exploration with a story that is being narrated little by little and that leaves us with honey on our lips with its demo, just after defeating its first boss. A duel in which it remains again patent the importance of the harpoon, in this case in order to dodge faster attacks.

Before getting there they killed me, when they saw me ambushed by the enemy and put me in the wolf’s mouth. But I didn’t have to redo much of the journey, being generous with the checkpoint. And before, I had already tried what happens when falling into the water in what seemed like certain death: they took a little of my life and I reappeared instantly on the edge of the cliff. Will it change in the final version?

Be that as it may, did not give me the feeling of being a complex game, in part because of how versatile its protagonist is with the combos and the dodge movement. Another issue is knowing how it will evolve, since the inventory only showed the objects that I was collecting, but without the option to interact. And there will be some secrets, when I run into a hidden passage … My eagerness as an explorer is served.

In this short journey I was also able to speak with one of the castaways, who gave me a key that was the boss’s anteroom, and even meet a mysterious lady … I was even able to enjoy a crossbow to attack from a distance, not only through the harpoon. But I know that I have only scratched the surface of an adventure that I will surely enjoy in January. Will they put it in Xbox Game Pass? Hopefully. For now, the aforementioned Cyber ​​Shadow will be on Xbox Game Pass. ¡Genial!

With Mod you can change your appearance afterwards