review with trailer and game experience for 3DO, MS-DOS, Saturn and FM Towns

Everyone knows that the battle for 32-bit consoles was won by Sony with its PlayStation, to the surprise of SEGA with its Saturn. And that in that decade of the nineties there were companies that tried to gain a niche in the market and failed miserably, both Atari with its Jaguar and The 3DO Company with its 3DO, two consoles that did not take advantage of their potential and with a very poor catalog of games compared to the two mentioned giants of SEGA and Sony.

However, things as they are, We owe 3DO the birth of Need for Speed

, for example, or that oddity from the Toys for Bob studio called The Horde who starred Kirk Cameron. Yes, the same actor from the series The problems grow.

The Horde mixed action with management and strategy 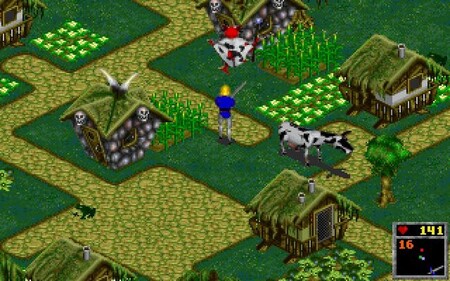 The Horde It was not a game that made big headlines in the Spanish press, perhaps because it came out first in 3DO (it also came out shortly after in MS-DOS and Saturn) or perhaps because of its innovative proposal, but it certainly did not garner any notes compared to others. releases of that time. And that the claim was striking for those of us who grew up watching Kirk Cameron in that 1985 series.

The new 32-bit consoles offered the possibility of having intro scenes in FMV (Full-Motion Video) thanks to CD, so it seemed to be before a movie that gave rise to a video game right after. That the premise of this Toys for Bob work was absurd didn’t matter. Because in its prologue we saw the peasant starring Kirk saving the king’s life, so the latter, in gratitude, gave him his sword to protect them from the horde. What luck, right? No, what a brown. Because the Hordlings they are innumerable.

And it is that these red monsters of different shapes and sizes ravage the kingdom year after year destroying its houses, its crops and killing its inhabitants, of course. Hence our obligation is to eradicate them so that the kingdom can prosper. And unfortunately it will not be the only problem in this story.

And The Horde It did not captivate the press in the same way, it was because he proposed a totally innovative style of play … but complex until he got the hang of it. The strategy part was at the same time management, since we not only had to place traps or walls to control the areas through which the Hordlings could come, but also plant and later fell trees to obtain more coins that would allow us to buy more and better things throughout the game.

For that planning there was a time limit that we could advance if we did not want to wait for the horde. After this came the action part controlling Kirk Cameron with the sword to attack the monsters. Movement was one of the aspects where the game suffered, moving in eight directions. In fact, The entire interface was far from the RTS facilities to use and as hack & slash was the most primitive. But the mix was very original, yes.

We said a few paragraphs earlier that the horde was not the only problem and this was given by the taxes of the kingdom per year. Initially, we were asked for 20 coins, but the figure was rising year after year, which forced us to plant many more trees, among other things, to be able to face not only the horde, but also the demands of the kingdom to prosper properly. .

Ahead of its time that must be vindicated 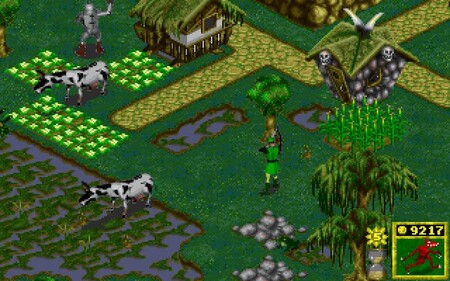 Logically, these demands with taxes had at least their positive part, since at the end of each year apart from being able to save the game we had access to the store from which to buy various upgrades

, like being able to hire the services of other soldiers, unlock decoys for the horde or even bombs and a teleportation ring. So it became harder (especially if we did not manage their economy well), but it gave us more advantages.

Completing the various seasons each year had its reward, therefore. And it was not always a catastrophe for some Hordling to destroy a house or kill several villagers, because if we planned well in the long run, things would become more bearable. And for this, access to the minimap also helped, from which we could not only see where the monsters were coming from, but also cut the trees directly from there, as in any Age of Empires and PC.

Looking at it in perspective, it is very surprising that it is from the same studio that created Pandemonium! or the person in charge of those remakes “three in one” called Crash Bandicoot N. Sane Trilogy Y Spyro Reignited Trilogy; even the most recent Crash Bandicoot 4: It’s About Time. Going back to The Horde now gets harder than before, but with more experience to successfully face your peculiar proposal.

It will certainly not be a candidate to one day receive a remastering, but it is the typical abandonware Who deserves to give it another chance, because it gets to sting and have fun. And seeing Kirk Cameron in this guise before embracing evangelical Christianity is priceless.. Why The Horde it is enough gore…

The Legend of Zelda: Sky Sword is the best-selling game in the United States in July-NPD

The Legend of Zelda: Sky Sword is the best-selling game in the United States in July-NPD