Seven things I’m liking about Final Fantasy VII Remake Intergrade on PC, and three other things not so much

History repeats itself: as happened in 1998, Cloud Strife illuminate based on explosions and sparks the city of Midgard on PC, having spent a margin of a year since the premiere of Final Fantasy VII on PlayStation consoles. Of course, it must be recognized that the jump from the PS4 DualShock to the mouse and keyboards has seated the game of 2020 wonderfully: Final Fantasy VII Remake Intergrade is the review was worth it the long wait.

Because Square Enix has found on the PC and the Epic Games store itself a perfect window to bring its great sagas, and if not too long ago we saw the Kingdom Hearts trilogy land with applause, today we have to welcome the one that until now is the definitive version of Final Fantasy VII Remake. At least the version more complete in content and more brutal in terms of presentation.

But of course, what is really interesting is not the amazing aspect with which we will see This reimagining of the Squaresoft classic, but what it brings to the player. An emotionally charged plot in which extraordinary characters fight against their ghosts from the past and for the future of the planet. And at the epicenter of that conflict the sefirot himself, one of the best villains in the entire history of the video game. Although, as Rubén said, this version of Cloud’s archenemy is not exactly the same as we met in 1997.

In iGamesNews We have already been able to play long and hard at the PC version of Final Fantasy VII Remake Intergrade, and the sensations are very good. What used to work on PlayStation consoles now shines on desktops again, providing an opportunity for keyboard and mouse gamers to immerse themselves in a must-see RPG; but also the best alternative to tackle the Yuffie Kisaragi Chapter which, until very recently, was exclusive to a PS5 which, by the way, still has stock problems.

For this reason, after overcoming the shock of entering New Game with surprising ease, and with a renewed illusion based on distributing swords at 120 FPS, we have gathered in one place our feelings regarding Final Fantasy VII Remake Intergrade on PC in the most illustrative and enjoyable way through a review of the seven things that I am liking about the mouse and keyboard experience, as well as those that, at least for now, deserve to be taken into account.

Resolution and performance to the max 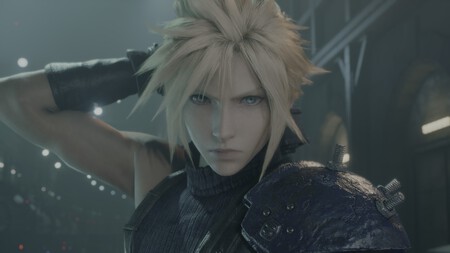 If you are passionate about Square Enix-style RPGs and were thinking of giving your PC components a boost, meet the recommended requirements of Final Fantasy VII Remake Intergrade It is totally worth it: unlike the PS5 version, in which we are given the option to choose between a graphic mode or a performance mode, here we can play in 4K and set the framerate to 120fps practically on the fly. 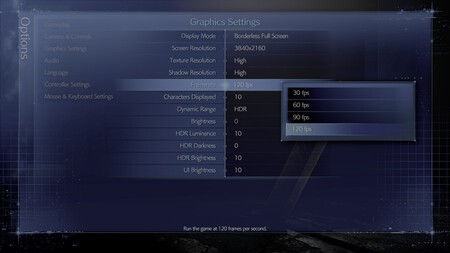 For reference, the PS5 performance mode allowed us to play at 60 fps, which is a considerable quality jump that has a direct impact on the development of the game. To which must be added, of course, that we will be able to accommodate other adjustments loosely in case we see that our team has problems keeping up with the people of AVALANCHA.

The texts in English? 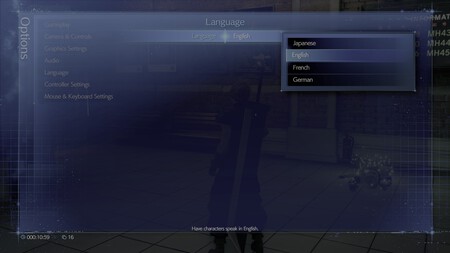 As much as I’ve scrutinized the game’s language options, I’ve only been able to play Final Fantasy VII Remake on PC in the language of Shakespeare. The only alternative language that I have found allows me to choose the voices of the protagonists (Japanese, English, French and German), but the subtitles and menus are displayed on the screen in English.

In the Epic store tab Spanish texts are said to be included. An adjustment may have to be made from outside the game itself, but for now I preferred to continue advancing in my game and strike. All in all, and in case the adjustment is not possible, it can be a barrier for a range of players that, incidentally, does not exist on PS5.

Mouse and keyboard are perfectly integrated 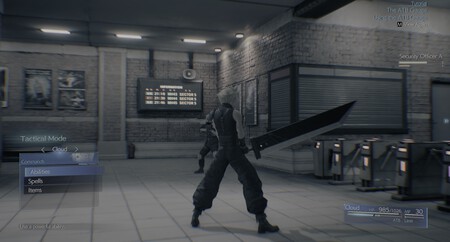 It does not matter that we have gotten used to playing with the controller: taking action using the mouse and keyboard is a breeze. We can accommodate the buttons or use a traditional controller, of course, but the integration of the wheel when using skills during battles is a total success. In addition, we can accommodate the sensitivity of the mouse and, when planning the combats or making the character changes, it is a success. 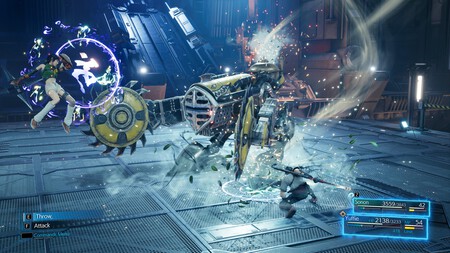 The direct consequence of the above factors: the fighting is fluid and a true spectacle in battle that manifests itself in all its glory. The visual improvements of PS5 look scandalous at 120 fps, especially if we have a monitor ready to play and well configured. If you have already been fascinated by fighting or want some epic battles in an RPG, this version of Final Fantasy VII Remake

on PC it will blow your mind.

Are you coming just for the Yuffie episode? No problem 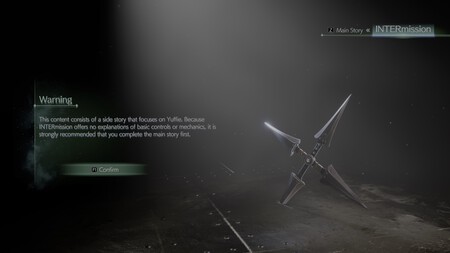 As we discussed, the version Final Fantasy VII Remake PC is the only alternative to PS5 (at least, so far) to access the Yuffie bonus chapter and the new final scenes of the game. Which results in that there will be many interested in this content and that they will be more than seasoned in the content of the PS4 game. Luckily, for all of them there is the possibility of going straight to the novelty.

From the main menu, and giving a simple button, we can access without formalities to the contents of INTERmission. Of course, there will be neither tutorials nor guides. Our advice is to fly the first Mako jet first and adjust the controls and sensitivity, though We understand that impatience can. 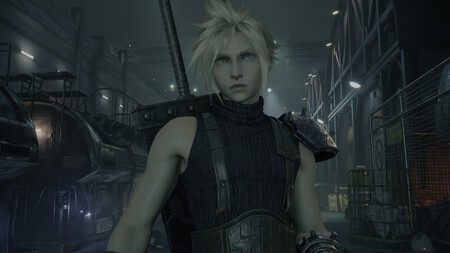 I confess it, I’ve spent more time than I should in photo mode. But it is too good. The quality of the models and the situations are simply spectacular. Of course, the camera is controlled exclusively with the keyboard, but with a little bit of skill you can get some results to frame.

Yes, you do not feel like fighting too much … you can also go to fixed shot 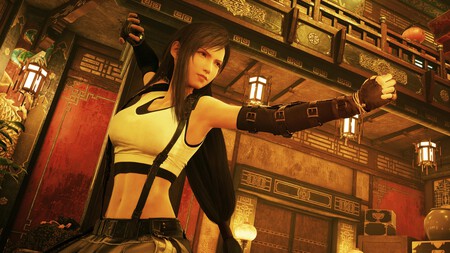 The battles, as they have been raised in Final Fantasy VII Remake and how they manifest themselves on PC, they are one of the most powerful claims in the game. The other great claim is the story itself. A plot that addresses rebellion through characters who, each in their own way, radiate their own naivety, nonconformity and melancholy. And if the second is precisely what you are looking for, you will be able to speed up the first a lot and well. 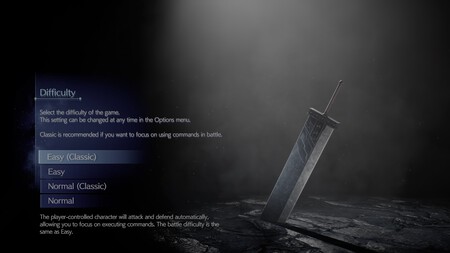 Final Fantasy VII Remake It offers no less than four difficulty options plus other additional ones that you get when you complete the game. You can choose an experience more aligned with the classic style and in which the characters attack and defend themselves automatically and even make the battles easier. It will not be a movie-game, but it will save you any frustration when it comes to continuing the story. 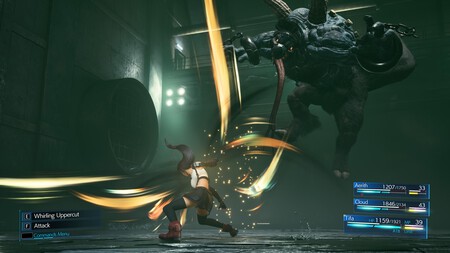 IM glad that Final Fantasy VII Remake has come out on PC and that the conversion is being so interesting and spectacular, but there are specific aspects that I miss and that Steam has very well implemented. Remote play from PC to my television via the Steam Link App (although I can connect it via cable) or not having all the installments of the saga in the same place is a shame. But better than nothing.

However, it is impossible not to fantasize about the entry of mods (as is the case with Final Fantasy XV Windows Edition) and how good it would have been for the Steam community and a good opening to the Steam Workshop. This does not detract from everything it offers Final Fantasy VII Remake, which is not little, but dreaming is inevitable.

By when will Final Fantasy VII Remake part 2? 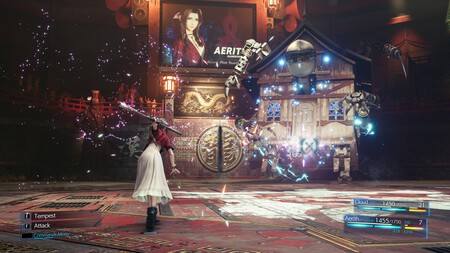 Final Fantasy VII Remake Intergrade It is not unfinished, but quite the opposite: It is the most polished and complete edition of the remake. But the continuation of the great plot raised in the Squaresoft classic is still up in the air and, despite what was contributed by the Yuffie chapter, including Fort Condor, we find a story with an open beginning, middle and ending. An epic show, of course, but one that sooner or later must be continued to follow in parallel -or not- the events of the classic Final Fantasy VII. And the wait, we fear, goes for a long time.

Extra Ball: if you come from the classic, you are going to hallucinate 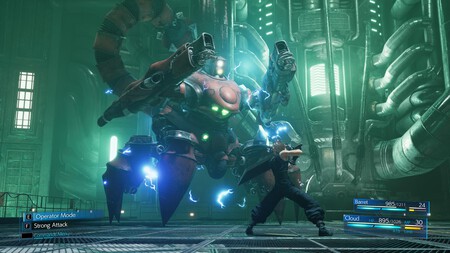 No list of ours is left without an extra ball, and this one is dedicated to all those who did not get to play Final Fantasy VII Remake On PlayStation: If you knew Cloud, Aeris and Tifa and were looking forward to them coming to PC with a fresh look, get ready for a whole gale of surprises, adjustments and licenses that do not feel bad at all and know how to take you in new directions. Because the biggest leap that takes Final Fantasy VII Remake is not about the visuals, but about epicity and ambition. And just for that, even if you had a great attachment to the classic, it is worth embarking on this journey.

Complete holiday quests, fight with items without a safe, and more in Fortnite’s Winterfest 2021 – iGamesNews

Here are the PC configurations to remember

LoL: Rekkles and Hantera, a winning duo for KCorp? The 2022 LFL Spring Split is going to be hot!

FIFA 22: Official: This is the Team of the Year