Stormy leaves its Early Access phase after three years. This is this crazy shooter in the form of a roguelite

The different games of the saga Serious Sam they are characterized by being frenetic FPS with action to give and take. A few years ago the series wanted to take a new direction from another perspective, which is why the development of Serious Sam: Tormental was announced, a top-down roguelite shooter.

For three years it has been in development in the form of early access, but it has finally been completely finished, which is why its final version has been put up for sale through Steam

. In addition, to celebrate its launch, its price has been temporarily reduced by 25%, so until April 15 you can get hold of it for 7.49 dollars.

Beyond that big change in the gameplay and in the proposal in general, another detail that makes it so special to Serious Sam: Tormental

compared to the other titles in the franchise is the cartoonish touch of its characters and enemies. But don’t let appearances deceive you, because the shooter is one of the most brutal with showers of bullets everywhere. 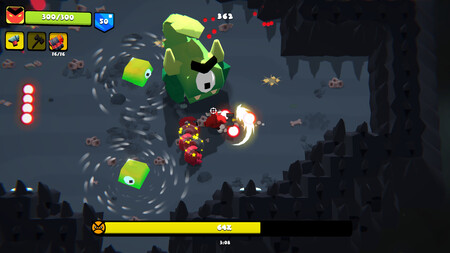 Our protagonist will enter the depths of an abandoned temple in search of a cursed artifact capable of the unthinkable. Along the way he will have to fight against hordes of monsters that will not mess around in some scenarios that will be procedurally generated and also in which we will obtain weapon and skill upgrades.

On the other hand, the final version has been accompanied by a free update which includes a new area, more weapons, powers, missions and a new character to control. In short, a nice and wild shooter in which you won’t stop hitting shots alone or with another player thanks to its local cooperative multiplayer mode.

Squirrel with a Gun: Unreal Engine 5 Tech Demo You Didn’t Know You Needed

Skyrim: Nemesis – The best feature from Shadow of Mordor comes to Skyrim via mod

The best PS Plus games for PS5