Am I the only one who doesn’t want to eat anything else for a month? Perhaps the tremendous binge that we have of these days of Christmas looked little like the image of Magic: The Gathering that you have on these lines while it was on the table of our grandmothers, but surely once in our stomach it does not differ too much.

That’s how I feel at least, as if a jelly-like cube that Raquel likes to play so much in our meetings in elstream I was struggling to get out of my stomach. So since I don’t know if I will finally survive this year and the Magic Chronicles They will stop here, I wanted to take advantage of the day to congratulate the holidays and the new year to all of you who have followed us in recent months.

And what better way to do it than with Magic’s exclusive Christmas cards? Since 2006 Wizards of the Coast decided to celebrate the holidays by creating a special letter to give to employees and partners, the world of Magic has been filled with letters as cool as these.

Logically they are cards not suitable for tournaments, but despite being impossible to play officially some have some really amazing mechanics that I wish we could put into play one day. Let’s take a look at them. 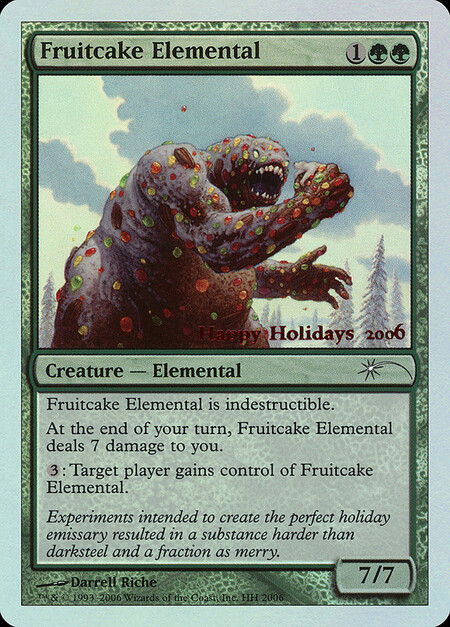 The Fruitcake Elemental it’s a spectacular 7/7 indestructible that only costs three mana. The bad news is that it deals 7 damage to you at the end of the turn, but at least you can turn the situation around by kicking it at your opponent for another three mana. 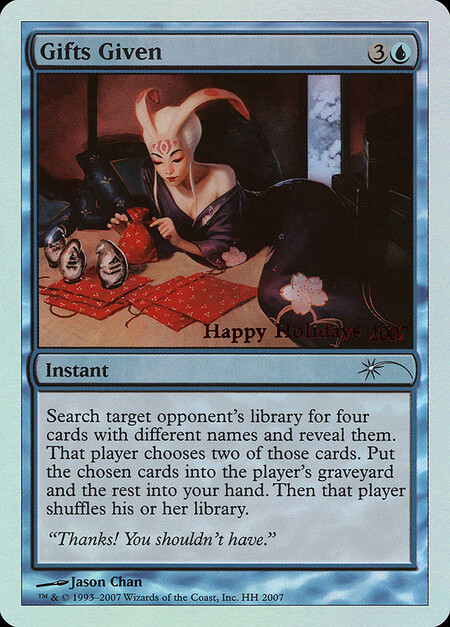 The one of Gifts Given it is probably the best instant you can get to your face. You choose four different cards from the opponent’s library and give them a choice of two to send to the graveyard and another two to keep yourself. Four mana incredibly well spent. 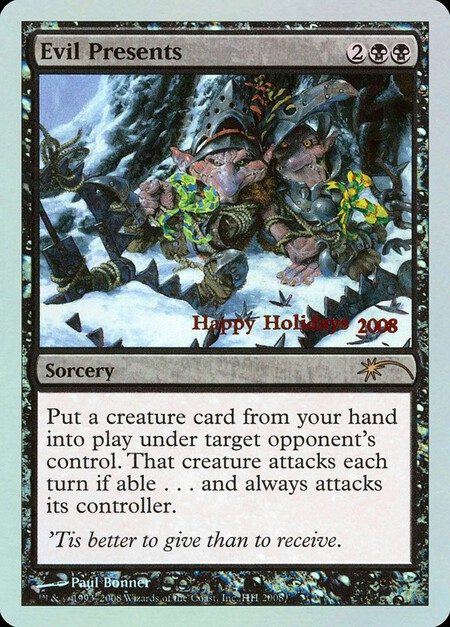 Evil Presents it is, as a good black card, a poisoned gift. The idea is to play one of your creatures on the opponent’s side and force it to attack each turn. Where is the girito? In which the creature will always attack its controller. The combo with the Fruitcake Elemental counts itself. 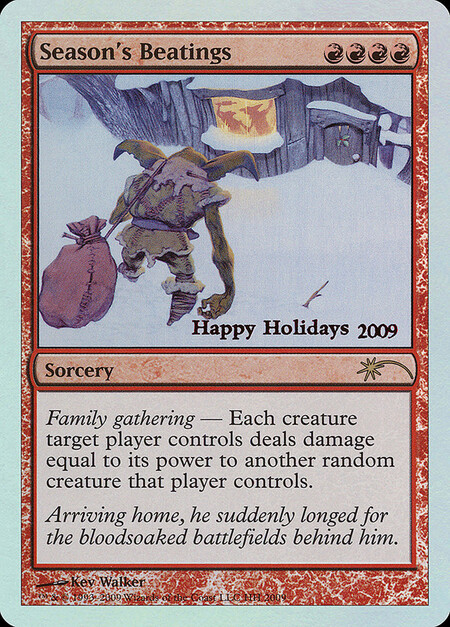 A spell that looks a lot like any family Christmas meal. Season’s Beatings causes each creature the enchanted player controls to randomly damage every other creature the player controls. With this we were going to have a great time compared to the aggro decks that are so fashionable today. 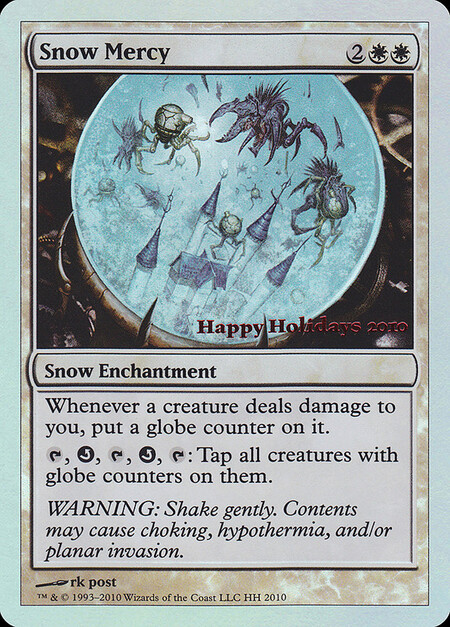 The de Snow Mercy it is without a doubt one of the best mechanics on the entire list. The idea is that, once enchanted, each creature that attacks you gains a crystal ball, and when you tap the enchantment, you also tap any creature with a crystal ball on it. Turning it several times as if it were a snowball seems brutal to me. 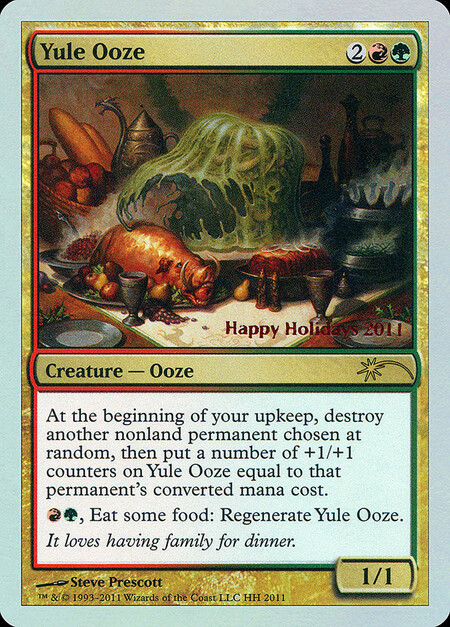 The Yule Ooze must be one of the most fun cards to play. At the beginning of each turn, a random card that is not land is destroyed, and the slimy mass gains as many + 1 / + 1 counters as dictated by the cost of that permanent. Also, every time you eat you can regenerate it. 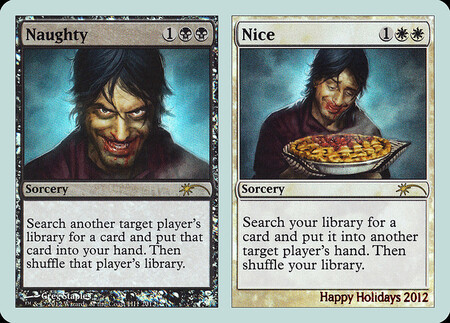 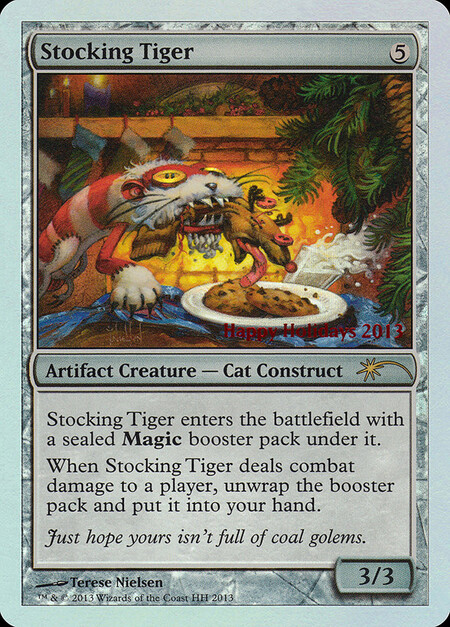 The Stocking Tiger infinite cool. He enters the game with a pack of Magic cards under him, and when he damages a player, you open the pack and keep all the cards you get in hand. It would be even more cool if the cards magically appeared under him. 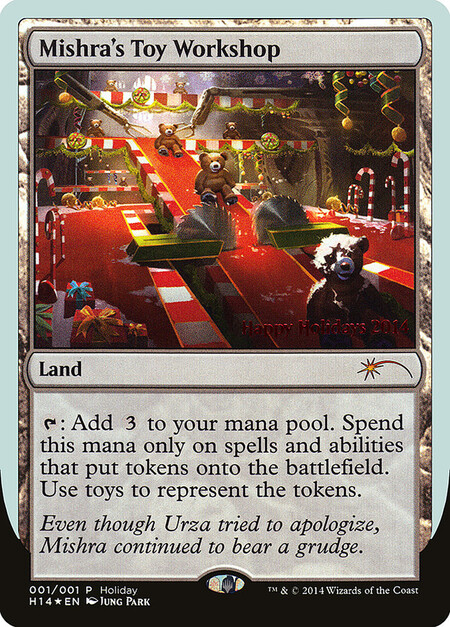 Mishra’s Toy Workshop It is another quite top card, but you have to build a deck that is very suitable for it. A land that once tapped adds 3 to your mana pool, but you can only spend them with spells and abilities that place tokens in the game. The twist is that the tokens will have to be represented as toys waiting to be sacrificed. 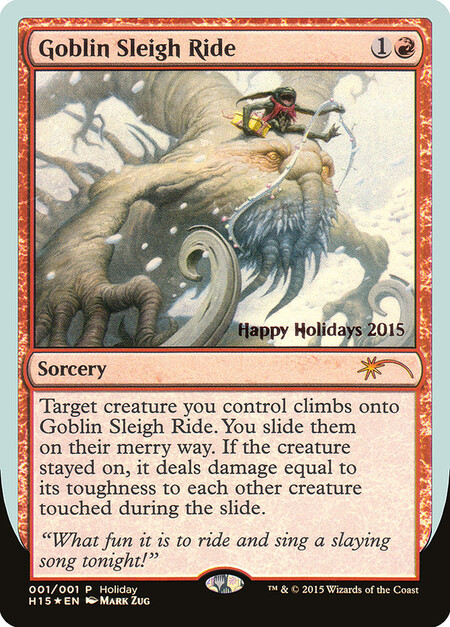 The de Goblin Sleigh Ride It’s another one of those Un-Set style cards that you can make for a laugh or two. You must climb a creature on it, launch it in any direction as if it were a sled and, if it stays on top, it deals damage to any creature it has touched during the ride. 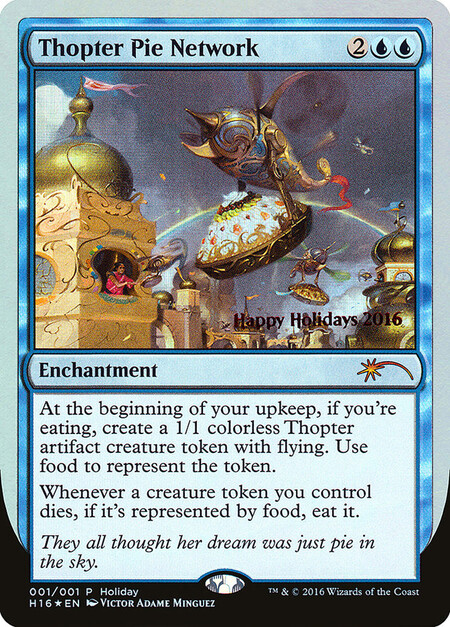 Another madness is that of Thopter Pie Network, which at the beginning of the maintenance, if you are eating, creates a 1/1 token represented with that food itself. If the creature dies, then you have to eat whatever you put as a token. 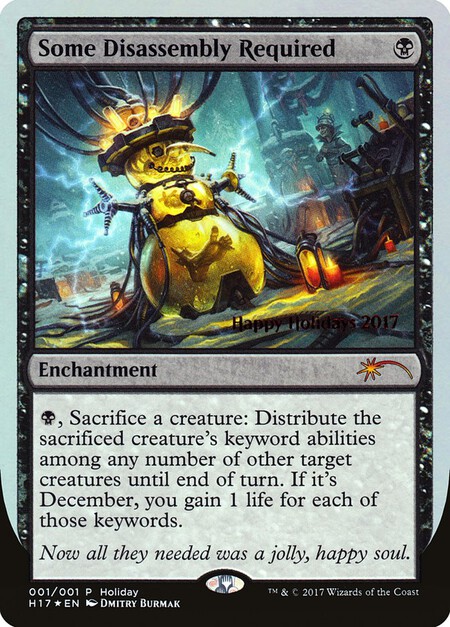 Eye to Some Disassembly Required, which with the Innistrad decks and the exploit mechanic could throw a tremendous party. The point is that by sacrificing a creature you can distribute its abilities among the rest of the creatures in play until the end of the turn. Also, if you are in December, you earn a life for each keyword. 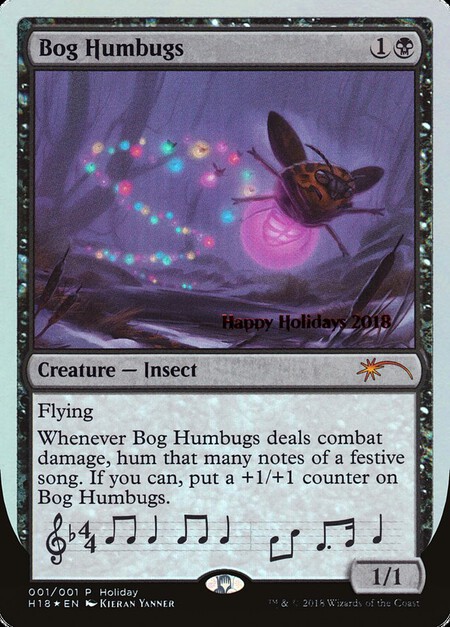 The Bog Humbugs Besides being a creature, the sea of ​​chula teaches you English, because I had no idea that Hum meant Hum. A flying creature that does damage, you can hum the song below to put a + 1 / + 1 on it. What song is it? If you don’t know, here you can discover it. 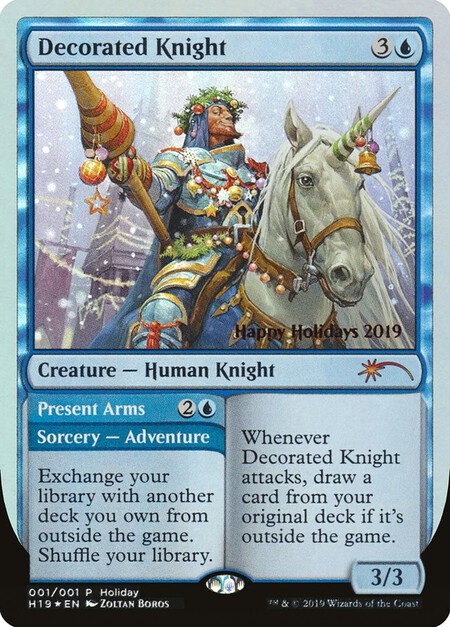 With the Decorated Knight Not only do you get a brutal enchantment and an even cooler creature, but an additional deck as well. The idea is to take your deck out of the game and pick up another, and then draw a card from the original deck each time you attack with the knight. It would take me 2×1 not to steal lands that turn. 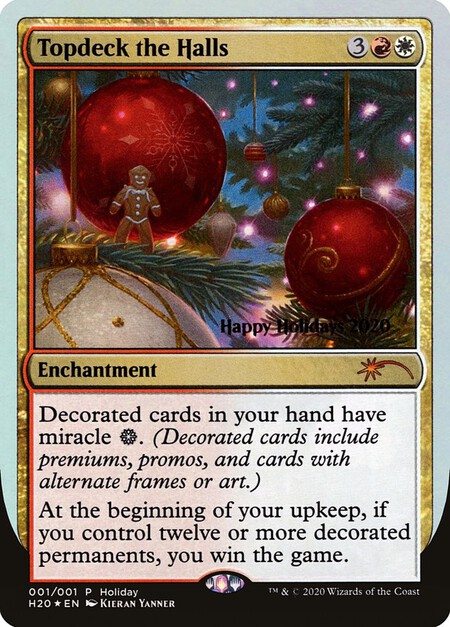 Be careful with this one, which is very cool. Topdeck the Halls allows us to win the game if we have 12 or more decorated cards. By decorated it is understood that they are foil letters, promotional cards, with alternative frames and others. It would be difficult to keep them in play all that time, but boy, would it be worth it. 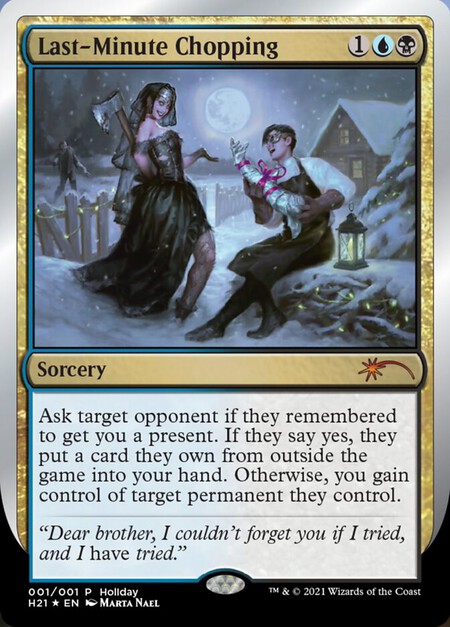 Finally we leave you with this year’s Christmas letter, called Last-Minute Chopping. The card allows us to ask an opponent if he has brought us a gift. If he says yes, he puts a card that is not in the game in our hand. If not, you gain control of one of its permanents.

And so far the review of magic christmas cards. On behalf of the iGamesNews, Webedia and Wizards of the Coast teams, I wish you all a very Merry Christmas and a happy New Year. Thank you very much for living this adventure with us.