Next week we will relive the events of World War II with Call of Duty: Vanguard, the new installment of the franchise about which Sledgehammer Games wanted to offer a few new details, including the presentation of some of the main characters of the campaign and also of the multiplayer mode to know them in greater depth.

In the case of the campaign, it will star a group of soldiers of the most diverse that will share the same objective, such as stopping a secret Nazi plot. Called Special Forces, all of them must put aside their differences as they fight as a team with a backstory that promises to be the most spectacular.

To discover their motivations, their personalities and other aspects, Sledgehammer Games invites us to see the following four videos dedicated to each of these soldiers:

Its about leader of the German Special Operations Task Force. It is characterized by its devotion to fulfill the main mission and will perfectly exercise its role as leader. Likewise, we will see a brave, intelligent person who, although he did not want to lead the group, will take on the role in order to make sure that all his teammates come back alive.

In Daniel’s case we will see an expert sniper that he will not hesitate to take down targets when necessary. A Japanese American who will use his excellent marksmanship to protect and support his teammates.

Padmavati is about a woman who has lost her homeland twice, once to the settlers and the other to the fascists. It has a peaceful character and at the same time is a fighter woman, an expert in jungle warfare and will also take care of others as a nurse.

Like Arthur, he comes from the Task Force sent to Germany. A sniper feared by the Nazis and idolized by Russian soldiers for her great skill and with which the creators of the game want us to see a character that would inspire all the brave women who once fought and died to protect their home.

Beyond all this, Sledgehammer Games also wants these sensations of realism to be transmitted in the controller when we have it in our hands, especially in its PS5 version. That is why the title take advantage of the most important features of the DualSenselike its haptic vibration and adaptive triggers. 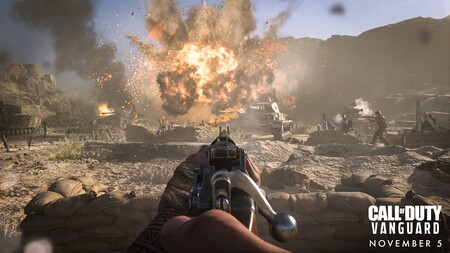 In this way it is intended simulate trigger weight on guns to try to match it to real weapons, something that will be appreciated in the pressure that will be necessary to exert or in the distance that the trigger travels once it is pressed. This sensation will occur differently with each firearm to ensure greater immersion and for each player to use the one that best suits their way of playing.

For its part, haptic feedback will ensure that let us feel the touch of all the action that we witness on the screen, such as explosions, flying debris, shots, etc., so that it seems at all times that we are fully involved in one of these war battles.

Although for all the comments, the version for PS5 points to be the most special of all, Call of Duty: Vanguard It will also go on sale on PS4, Xbox One, Xbox Series X / S and PC next November 5th.

The Dark Pictures: House of Ashes is available

More evidence Mass Effect: Legendary Edition may be about to launch Xbox Game Pass is about to surface

CoD Warzone: The End of Verdansk