We can now travel the peninsular roads with Iberia, the new DLC of Euro Truck Simulator 2

Fasten your seat belts, check your mirrors and make yourself comfortable. Euro Truck Simulator 2 has just launched one of its most anticipated expansions, especially among Spanish fans.

Iberia is the new DLC of the SCS Software title that invites us to travel the entire Iberian Peninsula. A large part of the Spanish and Portuguese geography is already available from now on, upon payment of 17,99 dollars

. Here is the trailer to take a look at what awaits us.

The attractions are multiple, being able to visit the Tabernas desert, the only one in all of continental Europe. Of course, you can not miss the so typical truck stops and gas stations

, true to their royal counterparts.

Monuments, medieval castles and statues of historical figures will also be available to be visited. A great work from the studio that is accompanied by a new World of Trucks event. 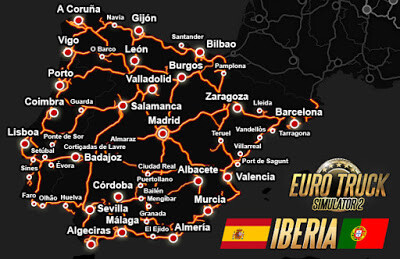 There will be Unique rewards for visitors to Europe and Portugal, which will be obtained as we visit cities and carry out various jobs. You can check the rules to get them through this link.

For its not enough, all this comes after the great lighting update that the work has received, allowing magnificent views. Now, beyond enjoying the new roads, it remains to wait for Heart of Russia, which will greatly expand the frozen country.

GTA Online is giving away another vehicle for free

Persona 5 Royal: The cult title commemorates the end of its PS4 exclusivity with a new video!

Terminator or Robocop games can do what movies can’t

GTA Online is giving away another vehicle for free