The FIA ​​Certified Gran Turismo Championships entered their third year with great anticipation as they continued to grow and attract new audiences and players. World Tour 2020 – Sydney in February was an amazing way to start the new season in a spectacular environment with exciting races. Japanese driver Takuma Miyazono won the Nations Cup honors and Nicolás Rubilar (CHI), Randall Haywood (USA) and Coque López (ESP) took victory for BMW in the Manufacturer Series.

We all know what happened next. The global pandemic has locked countries down and restricted large gatherings and international travel. There would be no physical World Tour events for the rest of the year.

But, of course, one of the great features of these emerging championships is that the majority of the races take place online. The 2020 Online Series saw competitors from five regions of the world compete against each other over the 30 rounds.

In November, three regional online finals were held with all the action broadcast on Youtube and available results here.

Other major races selected the world’s fastest Gran Turismo riders to compete in the World Finals in December.

Not being physically together didn’t mean we couldn’t create a great arena for the race. A new virtual home for the 2020 World Finals has been created, and with the help of new Sony α (Alpha) series camera partners, we’ve brought our competition together via videos from 14 different countries (and many time zones). different).

The result was, once again, an epic race.

The backdrop was set by the supporting event – the one-design GR Supra GT Cup final in association with Toyota. 24 competitors took part in two semi-finals reducing the peloton to a final of 12 players.

After falling over 20 seconds behind at one point in the final race, a combination of superb tire strategy and super-fast driving saw Japan’s Takuma Miyazono cross the finish line first. The race victory propelled him to the top of the standings and earned him the GR Supra GT Cup 2020 title ahead of Brazilian Lucas Bonelli and 18-year-old Spaniard Jose Serrano.

The second day of the World Finals weekend was dedicated to the Manufacturer Series. 36 competitors represented 12 manufacturers – including official series partners Toyota and Mazda – in teams of three. The three teammates would compete in one race each with the cumulative point total determining the winning constructor.

The highlight of the Manufacturer Series Grand Final was a 30-lap competition around the Autódromo de Interlagos, where two former champions of the Nations Cup World Final would have clashed: the Brazilian Igor Fraga, the winner. 2017 (and true F3 racing driver) representing Honda, and 2018 champion Mikail Hizal of Turkey driving Subaru.

After tight and exciting races – and a battle of strategy over how best to use the three different Michelin tire compounds required in the race – Hizal emerged with the race victory and the championship for a Subaru team that also included the American Daniel Solis and this man Takuma Miyazono. 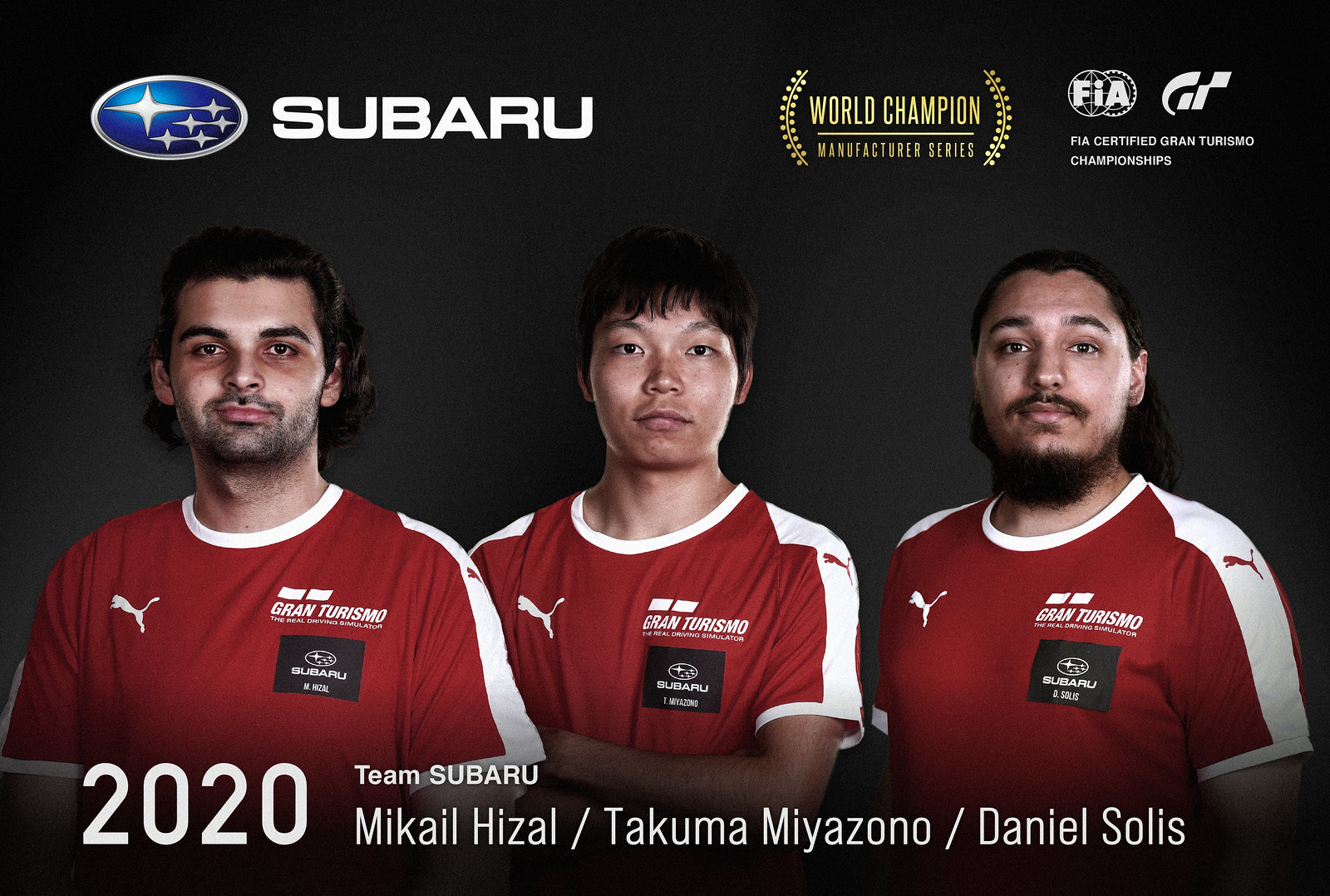 The 2020 FIA GT Championships reached their climax with the Nations Cup, pitting the top 16 competitors from around the world against three races. With the Grand Final worth double the points, it goes to two drivers, Miyazono and the Italian Valerio Gallo, who fought their fierce battle until the last corner of the last race, keeping everyone watching on the edge of their seat until the very end.

The battle between Miyazono and Gallo began early as the Japanese driver claimed pole position in Race 1 at Fuji International Speedway in the exciting new Toyota GR Yaris, with the Italian driver two-seater behind him in P3. But Gallo ran a flawless race with a perfect pitstop strategy allowing him to cross the finish line first, while Miyazono came in in a disappointing 9.e

place. But the winner of the Asia-Oceania region made a strong comeback in Race 2 by taking pole position on the difficult Tokyo Expressway – East Outer Loop road circuit, raced in tricky rain conditions on wet tires. Michelin in the Porsche 911 RSR. Miyazono put his car control skills on full display, beating Jose Serrano of Europe on the final corner for the win. Gallo never found a rhythm in this race, crossing the finish line in 10e.

The Grand Final started with intrigue as the two point leaders Miyazono and Serrano had a disappointing qualifying session, managing only a 7e– and 8e-placing the starting position, respectively. Gallo, seeing a window of opportunity, completed a dazzling lap in the elegant Mazda RX-Vision GT3 Concept around the Sarthe circuit, home of the 24 Hours of Le Mans, to take pole position for the 10-lap race.

With several different pit stop strategies used by the pilots, they put on a big show as several notable pilots vied for the lead including Australia’s Cody Nikola Latkovski, Tomoaki Yamanaka and Ryota Kokubun of Japan and Canada’s Andrew Brooks . After 10 laps, however, it was Gallo who crossed the finish line first, but Miyazono’s 2nd-the place was enough to give him the 2020 Nations Cup title, giving him 45 points in total against Gallo’s 42 and 3rdKokubun’s 29. He also had a clean sweep of the World Final, winning all three races over the weekend to add to his “World Tour 2020 – Sydney” victory and the Asia-Oceania Regional Final.

While many of us may want to forget 2020, Takuma Miyazono will remember it with pride for a long time.

The three events are available as separate feeds on the Gran Turismo TV YouTube Channel with results and full news available on gran-turismo.com.

Marvel could introduce us to the Avengers of the Multiverse as part of the results of ‘What If …?’