How to Select Wand and House in Hogwarts Legacy

In August 2022, it was revealed on the official Wizarding World website that he could be selected Magic wand there house in Hogwarts Legacy before the game is released. Probably the most important decision we will have to make at the start of this adventure. Being something so characteristic of the saga, it was obvious that it would be in Hogwarts Legacy. If it is true that within the universe he is chosen directly by the sorting hatHere we can decide for ourselves. Here we explain how you can select it before it goes on sale.

Probably the decision of house in hogwarts legacy important in the telling of history.

So you can select your wand and house in Hogwarts Legacy

First of all, it must be said that in order to do this it is necessary to fill out a questionnaire that will tell you what hogwarts heritage house

you belong to: Gryffindor, Slytherin, Ravenclaw or Hufflepuff. Thereafter, your results can be transferred to the game by linking the account so that the selection is automatic. 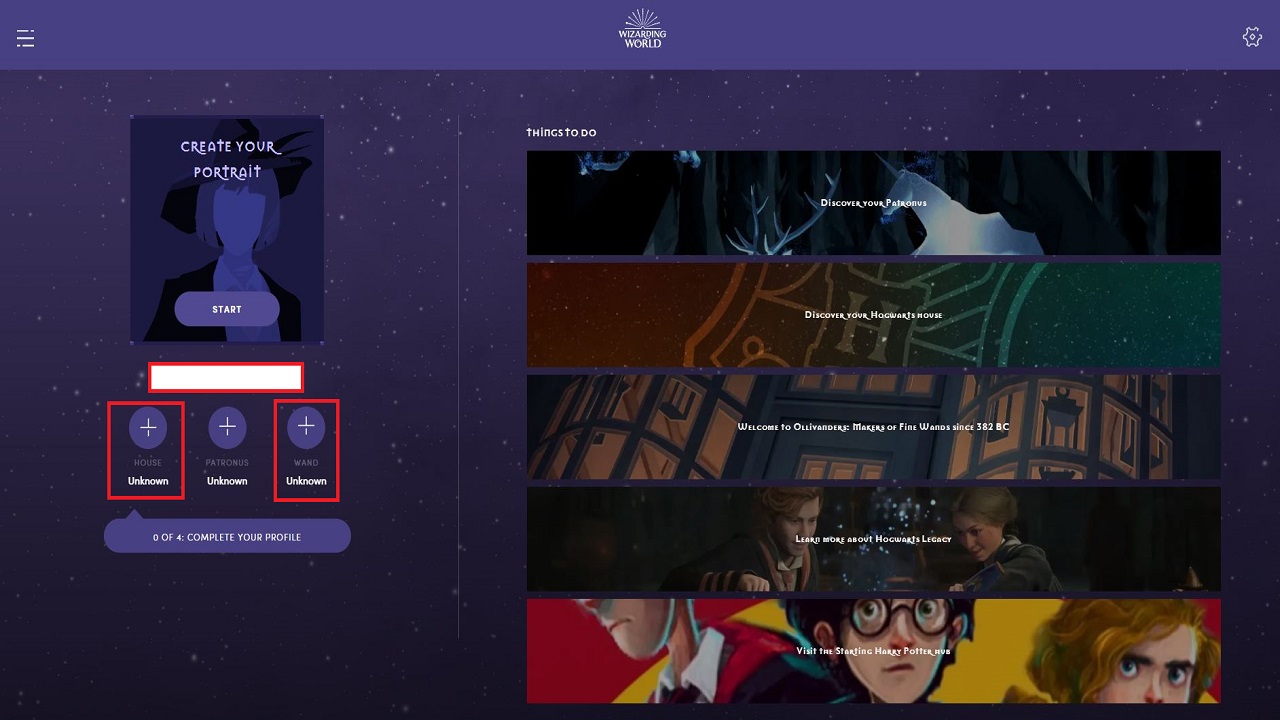 You will first need to create an account -or log in if you already have one- in Wizarding World. The next thing will be to complete the tests which you can access by entering your profile and selecting the “+” sign in “home” and in “baguette”. Once this has been done you can press “copy” and they will send you an eight digit code which will help you transfer the wand and house information from Hogwarts Legacy. You will need to create an account -or log in- on the official Warner Bros Games website, there they will ask you for the code. Paste it and you will have successfully linked the account Magic world with that of Games Warner Bros..

Although you also have the option of downloading the application for mobile devices (iOS and Android) and filling out the questionnaires there, in case it is more comfortable and simple for you.

The questionnaires -and the website in general- are only available in English, both in the web version and in the mobile application.

In addition to being able to select Magic wand there house in Hogwarts Legacy before its release date, if you do so, you will receive two in-game rewards: a skull mask with beak and an home school tunic.

What we know about the game

Hogwarts Legacy It will be an open-world role-playing game developed by avalanche software and set in the fantasy universe of the Harry Potter saga created by writer JK Rowling, but before the events of the books in the 19th century. Its release date is scheduled for February 10, 2023 in PC, Playstation 5 there Xbox series X/Sin April 2023 it will reach PS4 there XboxOne

. users of nintendo switch we will have to wait until July 25, 2023. At the moment it is unknown if the game will arrive on the hybrid console in a cloud version or not. It is important to mention that Hogwarts Legacy will not have microtransactions.

The player will be able to create his own customizable character in Hogwarts Legacy, who must belong to one of the four houses. And during the development of the story, our character will be influenced in some way by the missions that we will have completed. In addition, different spells can be combined to perfect our fighting style. We will have to progress little by little by learning new spells, leveling up and improving our skills.

On the other hand, outside the school we can visit Diagon Alley, Hogsmeade Town, Hogsmeade Station and even the Forbidden Forest. The downside is that, as confirmed on the official website, there will be no Quidditch matches at Hogwarts Legacy. Although it will be possible to fly with broomsticks and mounts to move around the world and race.

What do you think can be selected? Magic wand there house in Hogwarts Legacy before its premiere? What is your favorite house?

Forspoken Review – A slow burner, but not without its charms

How to enter the Kloros guild in Forspoken

Forspoken Partha Dice, how often you can play and the rewards explained

Answer Wordle today for Thursday January 26: what is the word today for 586?