Google has been making a number of changes to its apps and services for some time to improve their security, and the latest has affected Google Drive, its cloud drive. The company announced it through a post on its own official blog and tells us there that we will be notified when we host potentially malicious files.

Google Drive will now take care of alerting us when it detects a file hosted in our private space that may allow third parties to access our data. In case of risk of theft of our information

, Google Drive will notify us as part of the measures announced in the past Google Cloud Next 2021.

It will also come in Docs, Sheets, Slides and Drawings 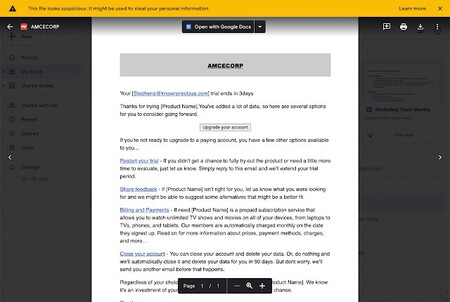 The company shows an example in their post post where an open document is seen with the aforementioned notification. More specifically, we are talking about a banner at the top of the file in which we will be told that it is a potentially suspicious file, in addition to offering us a link to expand the information on said alert.

“This file looks suspicious. It can be used to steal your personal information”. That’s what the banner at the top of the files we open that Google considers suspicious says. Thus, the company alerts us to files that could contain malware or that could cause us to fall into Phishing, or even suffer a ransomware attack.

Google has already communicated that the new malicious file alert is live and it’s only a matter of time before it takes hold in all of the company’s operational accounts. In principle, the alert is launched for Google Drive but the company already warns that will also be available for Docs, Sheets, Slides and Drawings

. For the entire Google office suite in the cloud.

This alert extends Google Workspace and G Suite Basic and Business users. It will be active for all users and for now it looks like there will be no way to turn it off. Although knowing what the runtime feature is, I think disabling it would be the last thing to do. Especially if we want to protect them from the various computer attacks embedded in our online files.