are not limited to just six Emojis

There’s one feature that’s not yet available in WhatsApp stable and has been raising expectations for months: message reactions. These are starting to appear for some beta accounts, always with a limit: only six Emojis can be chosen as reaction. What is surprising is that WhatsApp is ready to react with any emoticon.

. After broadcasting them on Telegram, these reactions are now ready on WhatsApp. And we discovered a secret.

WhatsApp is enabled to react with any Emoji

WhatsApp conversation with reactions that the application does not allow

That messaging apps allow a limited number of emoticons to react with makes perfect sense since they can focus animations, notifications, and interface on a very specific number of instances; that simplifies the task of development and maintenance, this also reduces future errors. For example, Telegram only allows you to react with 16 Emojis, WhatsApp with six. In principle.

By testing with the web application and the Beeper client, we verified that WhatsApp does not really limit reactions to the six Emojis mentioned: the system is prepared so that we can react to messages with any emoticon from the list. Even with the latest – notifications on the phone are received with any Emoji, the emoticon is perfectly rendered in the chat and also appears in the drop-down list. WaBetaInfo had already anticipated it as a future addition.

We were very surprised that WhatsApp limited the selection in apps when their servers are ready to handle any Emoji in reaction. In fact, these servers work in the same way as Facebook Messenger: it has an initial selection of emoticons that can be personalized by adding “customs” from the reaction selector itself. as detailed WaBetaInfoand because WhatsApp encrypts reactions end-to-end, the platform cannot know which Emoji the user chooses as a reaction.

Although we managed to reproduce the operation on both Android and iPhone, we could not find a way to send an Emoji in reaction other than in a WhatsApp client, Beeper; which in turn uses WhatsApp Web. 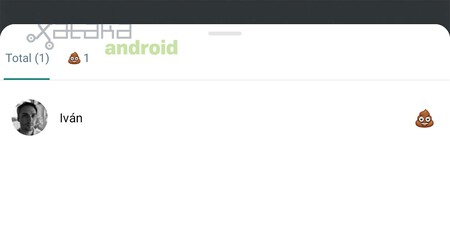 Counter of reactions to a specific message

We’ll see if the company finally opens up reactions to any Emoji or ends up limiting the code so that its servers only support picking six chosen ones: I like it, I like it, it amuses me, it surprises me, it saddens me and I pray/beg.

New details are leaked about ‘Spartacus’, the PlayStation Game Pass

New details are leaked about 'Spartacus', the PlayStation Game Pass