Back to the Xiaomi Mi A3, the latest Xiaomi with Android One still has a lot to say

Despite the international success that the original Xiaomi Mi A1 achieved the brand, It has been more than two years since we have seen the success of the most legendary Android One on the technological scene.. And we took advantage of the anniversary to collect the latest model, the Xiaomi Mi A3. How will he behave today?

The Xiaomi Mi A3 was one of the mid-range mobiles that attracted the most attention in 2019. Heir to the Android One saga, it was the last of the brand with this operating system; a detail that makes this phone even more unique. After more than two years in the market, How do you keep track of the daily experience and benefits? We picked it up to find out.

A design for which almost no time has passed 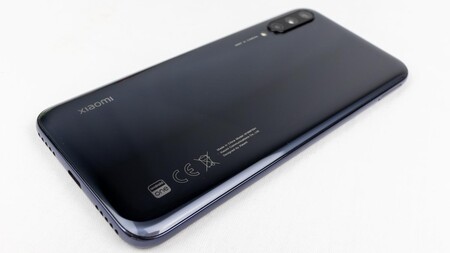 Looking outside the Xiaomi Mi A3 does not leave the impression that the phone has been old for its design remains consistent with what we can currently see within the brand. Soft edges, plastic for the body of the phone, double-sided glass, lens for the rear triple camera that protrudes by about a millimeter and a size which, without being small, yes it remains in what we could consider today as “content”. Because six inches of screen, no matter how much the faceplate is used, they will never give a small mobile.

Speaking of screens. This one, based on AMOLED technology, is the most negative point of the Xiaomi Mi A3. It was the year of his analysis and it continues to be now; with the addition that the brand has not corrected some of its faults: the panel is so saturated as standard that even the desks look unreal

With the saturation problem is the biggest problem of the Xiaomi Mi A3: the HD resolution allows you to watch content on the phone embark on a low-end experience. Lack of sharpness, the contrast is correct and the saturation, as we said, is exaggerated. Xiaomi didn’t include any temperature or saturation settings in the display settings. 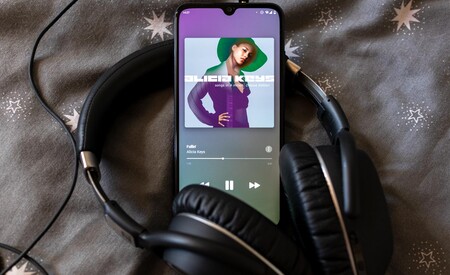 The sound maintains a decent quality on the Xiaomi Mi A3. At the time, it did not emerge negatively, any more than it does today: having a headphone jack is a plus, the power of its speaker is too (it does not sound bad despite some treble and distortion in the -beyond the average volume). With headphones, the audio maintains decent quality without standing outIt doesn’t matter whether they are wired or not. Android One doesn’t offer audio enhancements like Xiaomi typically includes them in their phones. It is sufficiently well equipped with Bluetooth codecs, including aptX HD, Adaptive audio and TWS. LDAC falls.

The performance of the Xiaomi Mi A3 is still good 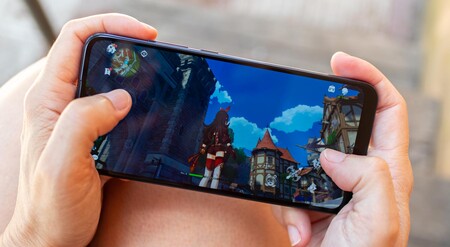 Two years have passed by our protagonist without really looking like it. We have already seen that the design is kept up to date. And the Android experience it also offers: mobile flows are fast, menus offer no resistance, launches apps quickly, and even feels as nimble as a Google Pixel. Save distances, of course.

The Snapdragon 665 was already a bit behind just two years ago. Even like that, It is an SoC that offers a good average of power, graphics quality and consumption: This trinomial ensures that time hasn’t made an excessive dent in the phone (software could also be included, but we’ll focus on that later). We enjoyed some delays, always when the Xiaomi Mi A3 was performing background tasks, such as updating applications.

Below you have the tests of reference of the protagonist of this retro analysis: 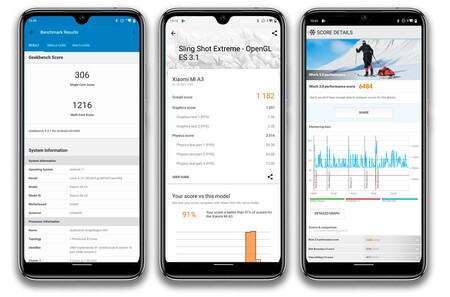 The Xiaomi Mi A3 rounds out the feature list with an optical fingerprint reader under the display which behaves quite well, includes infrared emitter (without an application, you must download a compatible one), offers FM radio (with app), has expansion via SD card, USB C and maintains a 4030 mAh battery. Its duration is ample: despite two years (its use was not intensive), autonomy regularly exceeds a day and a half; with minimal consumption with the screen off.

Android One is the great value of the Xiaomi Mi A3 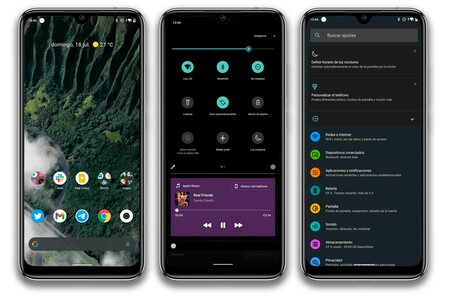 The brand hasn’t presented a new model of the cleaner version of Android with Google apps for two years, the so-called Android One. When it launched, this version was one of the aforementioned bigger Android One. It has gained in value, it is not in vain that the mobile remains up to date

: You have Android 11 and the security patch is June (and it guarantees monthly security updates).

Owners of a Xiaomi Mi A3 are well aware of the good and also the bad of the operating system that equips the phone: Xiaomi has had to stop updating to Android 11 several times due to serious problems on some phones. Record these issues with updates, the Xiaomi Mi A3 offers a very rejuvenated software look. 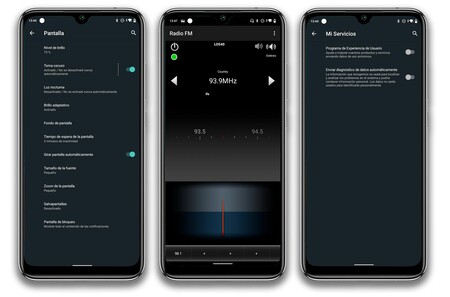 It seems that the years have not passed by the phone: clean appearance and very close to the Google Pixel, without the reloading of options that MIUI accumulates (this is also, in a way, a drawback), the phone arrives without bloatware and Xiaomi only includes a handful of its own apps (the camera, its store, the help desk and nothing else). The rest of the preinstalled software comes from Google.

The sensations that Android One throws in the Xiaomi Mi A3 are not too far removed from those offered by the Google Pixel 4a, for example: clean software, Google apps and no bloatware

The Xiaomi Mi A3 is proof that Android One continues to be a big hit in terms of software, even for those who don’t appreciate the benefits of “purer” Android. The phone continues to be nimble, it retains a second youth despite its longevity, it is still relevant today and they still have a long future ahead of them, even if Android 12 is not going to reach it (at least it should not. ). Too bad Android One is no longer one of Xiaomi’s priorities.

Better at photography than a lot of midrange now

One of the few customizations that Xiaomi makes on the Mi A3 has to do with photographic capture: the brand’s own app. This is extremely positive: since the application offered by Google for Android One can be greatly improved, Xiaomi’s software enriches the photographic experience with a multitude of options

, including portrait (not good enough cropping) and night modes.

The capture at a general level is very good, surprisingly the photos it takes to be on the market for two years. If you notice something old with delay between pressing the shutter button and recording the photo, it can take up to a second between one point and another (with some risk of shaking if the phone is moved). 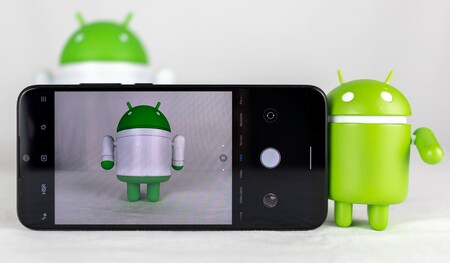 The processing is very natural, it keeps the details of the image, in good lighting conditions no problem (On the contrary) and when it is time to activate the night mode, the Xiaomi Mi A3 does quite well despite the fact that it takes several seconds to capture the photo (due to the combination of long view). 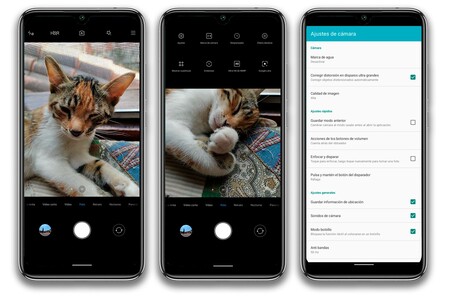 The 48-megapixel main camera works perfectly in most areas, just the opposite of wide angle: here the quality falls. A lot of. We see the loss of sharpness, the watercolors jump to the foreground (even in good light) and the mobile barely corrects the deformation of the lens at the ends.

The app includes the aforementioned portrait and night mode, it also has the Pro with which to manually manage most of the parameters. The Xiaomi Mi A3 allows you to shoot with the 48 megapixel sensor (the results are not much better than the automatic ones) and it includes scene recognition via Artificial Intelligence (it is better to disconnect it).

Below you have a sample of images taken with the Xiaomi Mi A3.

Xiaomi Mi A3, a mobile that deserves a worthy heir

The Xiaomi Mi A3 was presented on July 17th, just two years ago after this anniversary. With the time passed after the launch, and without Xiaomi renewing the “A” line, it is clear that Android One is no longer a brand value. And it’s a shame: the mobile feels great even two years late.

It moves smoothly most of the time, the appearance of the software is clean, it is updated safely and in the Android version it supports large capacity games (at medium graphics quality), its photos are better than many of the current midrange and even the content is displayed in dimensions. If it loses points on the screen (resolution, saturation and brightness), the wide angle can also be greatly improved. For the rest, the Xiaomi Mi A3 would continue to be recommended without the huge renewal rate that Xiaomi maintains in the 200 euro line. Even Android One doesn’t save it.

Warframe is far from over: New addon, many announcements

Marvel is Disney's answer to The Office in the Streaming Wars