The December ‘Feature Drop’ update for mobile Pixel brings a surprise that was not announced by Google: the 217 new emojis in addition to the 117 new emojis that arrived with Android 11 last September.

These new emojis they were expected in early 2021, but Google took advantage of the December update to add them. These are the 217 emojis that the Unicode consortium introduced a few months ago with the Emoji 13.1 release.

So are the 217 new emojis for Android

Of the 217 new emojis that have just arrived on Android, really five are new designs

. Now we have the Wounded heart, expiring face, heart on fire, face between the clouds Yes dizzy face (with spiral eyes).

The remaining 202 new emojis are new sex, gender and skin tone combinations for couples in love and man with a beard. This means that in addition to multiracial couples

now we also have the bearded woman, with its gender-neutral variant. 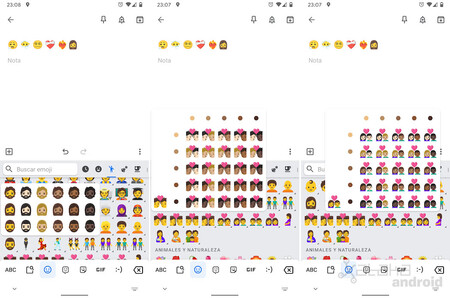 These new emojis will start to reach the rest of mobiles with Android 11 when they receive their security patches over the next few weeks or months. For now, updating emojis requires a system update, which may change in the next major Android update.

Guide Call of the Sea: Prologue

Guide Call of the Sea: Prologue