Google Photos is a photo gallery with cloud backup Very well known, but maybe you didn’t know that it has a hidden button to access random photos and videos. The “I’m gonna be lucky” shortcut, a button you can even pin to your Android desktop.

One of the features of Google is the “I’m gonna be lucky” button. Already in 1998, the button appeared on the first page of Google; and with an operation similar to the current one: by clicking on the ‘I’m going to be lucky’ button (‘I’m feeling lucky‘) the search engine will take you to the first search result

. Something similar to what Google Photos hides in its own Android app, although the result varies here: after pressing the button, random photos and videos are opened.

Google Photos shortcut that can be pinned to desktop

There is no “I’ll get lucky” feature in the app. Neither in the search sections nor in the menus nor in the settings: Google Photos hides the random search in its icon shortcuts. That is, you have to press and hold said icon for the option to randomly search the gallery synced on the platform to appear.

The random search offers a set of images and videos grouped by category. This could be a location, a type of content that Google Photos has automatically grouped part of the reel, a date, and even an event. By default, Google Photos will alternate between different searches when you press the button.

(country, activities, specific points where many images were taken …); offering all related content. And that usually doesn’t repeat itself, at least as long as a significant number of photos and videos have been synced to the platform.

To use this curious button, just follow a few simple steps: 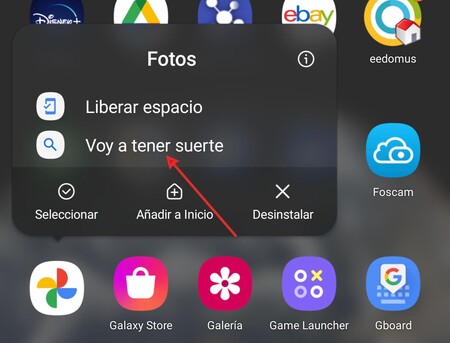 From that moment on, you will have access to a random search in your Google Photos and without having to enter the app or know what you want to search: Google “I’ll be lucky” will take care of the task.. It’s a curiosity that, beyond nostalgia, may not seem entirely useful. But aren’t photos a great tool to relive the best moments? Well, surely a lot of them, and that they are stored in Google Photos, were already forgotten.

“ I’m going to be lucky ”, but not enough to grab unlimited storage

The platform is updated in May since It’s last month that Google maintains unlimited storage for high quality photos and videos. If you still haven’t found an alternative and you use Google Photos a lot, you better hurry.