With Android 12, still in beta, a major overhaul of the operating system has arrived. ‘Material You ‘leave the famous’ Material Design’ which has accompanied the operating system for over five years and now system applications are gradually adapting to new design patterns. Design templates made up of dynamic themes that affect the overall visual appearance.

The latest Google app to adapt to this new responsive design is Chrome, which already shows the arrival of ‘Material You’ through its latest beta of the Canary program. So, it won’t take long for Google’s proprietary browser to bring this responsive design to the free version for all users, although you need to have Android 12 to enjoy it.

Chrome Canary is already adapting to the colors of Android 12

Future changes have been researched in Chrome Canary, the beta version of Google’s browser in the Android ecosystem. Thanks to the code of the last version, the activation code of the new design for Android 12 has been chased, for now through some flags to be activated manually because they are hidden in the settings of the browser itself.

The first of the flags is refactor-theme-android and it is in charge of allowing reconfiguration of Chrome theme on Android. The second flag is dynamic-color-android, it is responsible for activating the dynamic color of the browser on supported devices, for now those present in the beta version of Android 12. We assume that in the future it will be supported by all device updated to Android 12. 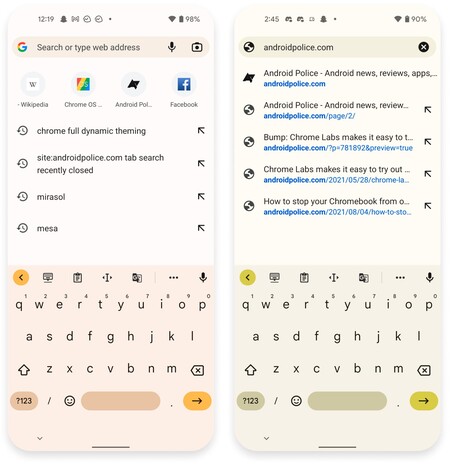 Once both flags are activated, just restart Chrome Canary to start seeing how the new dynamic themes work in the browser. As can be seen from the screenshots, Chrome begins to adapt the window background, the search bar and other elements, the design being even more homogeneous when Gboard, the Google keyboard, is opened to perform a search.

For now, as we said, these ‘Material You’ themes for Chrome only work in the Canary version, although we assume, given its advanced working state, that they will reach the standard version soon. from Google Play. In the meantime, it will be time to wait. remember that the final release of Android 12 is already around the corner.