everything you can do with the Google object recognition app

Google Lens is “the eye of Google”, a Improving object recognition technology and expansion to other apps since we first encountered it at Google I / O in 2017.

With so many new features, it’s hard to keep up everything you can do with Google Lens, especially since it does not focus on a single application, but is available in several. We tell you here, today, everything Google Lens can identify and where you’ll find it.

Google Lens is not an app, but rather a feature that Google has integrated into several of its apps. We were able to test it for the first time after its integration with Google Photos, although Google Lens has reached many other applications over time. These are all sites where Google Lens is located: 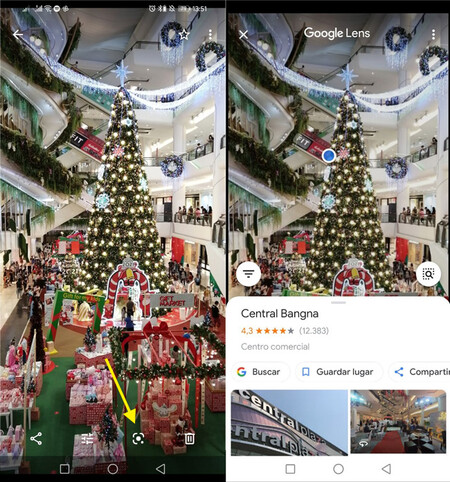 Google Photos was the first to host Google Lens. To access the smart features of Google Lens, you must first open a photo. Then the Google Lens button on the toolbar the bottom.

Tap on it to analyze the photo, including the circles that show Google Lens has something to say about it. You can also tap on a specific place to force Google Lens to identify that part or select text it’s in the photo. 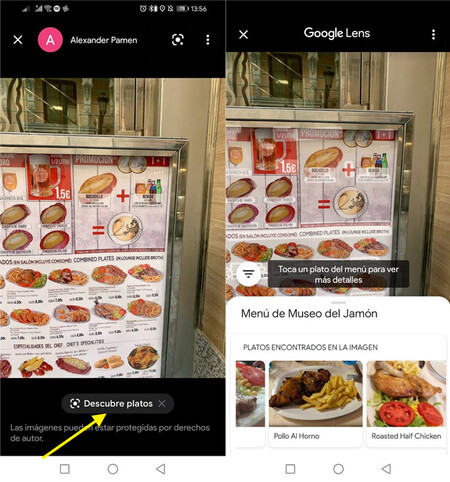 Google Lens is also integrated with Google Maps, especially in restaurant information pages. To use it, you must first open a restaurant’s information and open a photo that is in the category of View menu. You will then see two Google Lens buttons: one at the top and one at the bottom.

On Google Maps, Google Lens helps you identify dishes on a menu, showing you other photos of the same dish that have been uploaded as reviews and can also translate the menu to another language. 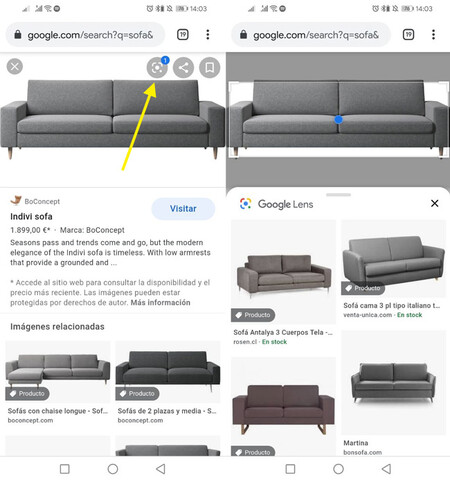 How could it be otherwise, Google Lens is integrated with Google search, but not in all searches. The Google Lens button appears in images identified as belonging to a product, in the Google image search.

When you click on the Google Lens button, Google Lens will show you Associated products. A curiosity of this integration is that you can touch on the screen to adjust the box you want to recognize. 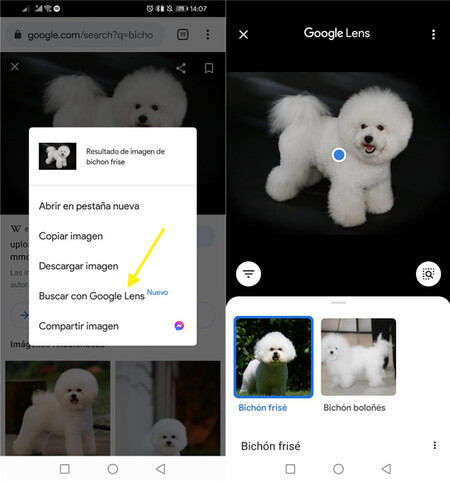 If the integration of Google Lens in Google search is limited to products, one way to be able to use Google Lens on any image on the web it is with integration with Google Chrome. This function started off as optional – it was enabled with a flag – but is now enabled by default.

To use Google Lens in this way, all you need to do is long-press any image you see on a webpage. In the context menu that appears, you will see the option Search with Google Lens. 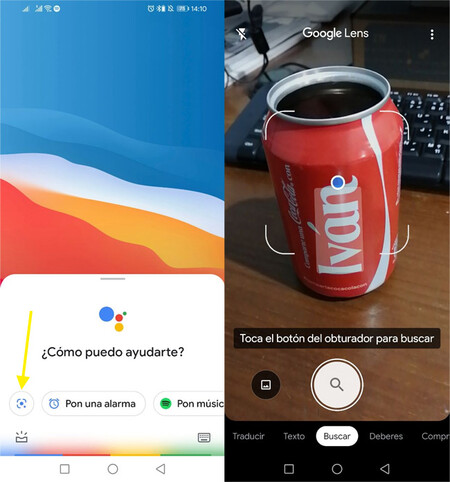 This will open Google lens in camera mode, to be able to switch from standard search mode to a more specific mode such as Homework, Shopping, Places or Text, as well as touch the gallery icon to use a photo that we already have on the mobile, instead of using the ‘camera. 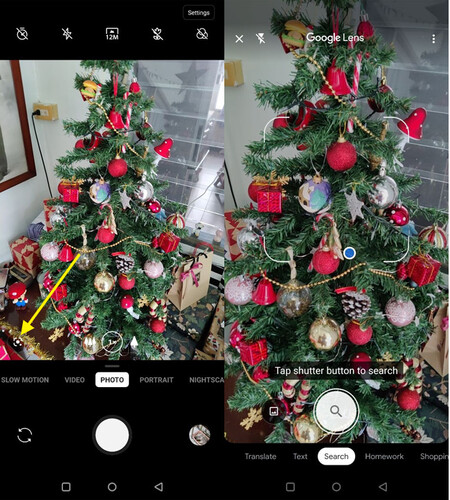 In this case, it’s more than anything a shortcut that will open Google Lens similar to how you can start it from Google Assistant. So this is another way to open Google Lens, in case there isn’t enough. 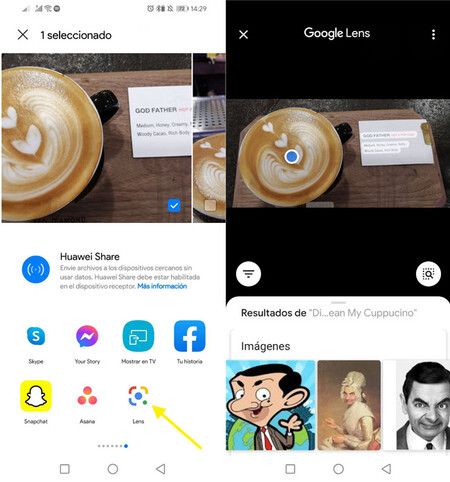 Google Lens integrates with Google Photos, the gallery app on many mobiles, as well as other gallery apps. If it’s not available in yours, you can also scan any of your photos using the Android Share menu.

The only requirement is that you install the Google Lens shortcut from Google Play, otherwise it will not be displayed. Then, from any app you can share an image with, you can share directly with Google Lens for analysis

Everything you can do with Google Lens

Google Lens is everywhere, but what exactly can you do with it? As of today, Google Lens has seven modes recognition that focuses on different tasks. They are as follows. 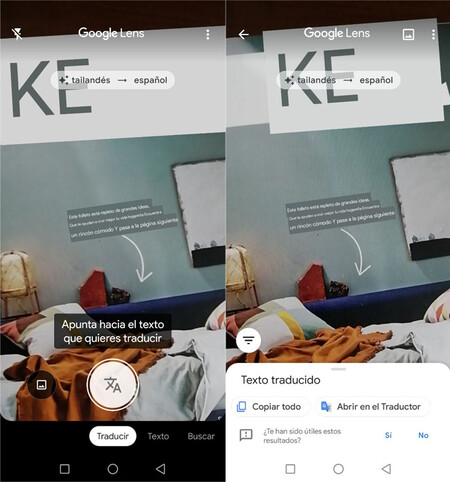 You can use Google Lens to translate texts focusing on them with the camera. To do this, switch to mode Translate and try not to move the mobile too much, so that it has time to process, translate and display the translated text on top of the old one.

Better yet, Google Lens automatically detects the languageAlthough if there is a problem, you can tap the languages ​​to change them. If you press the shutter button, you have the option to select the text that has been translated.

Identify texts and copy them to a PC 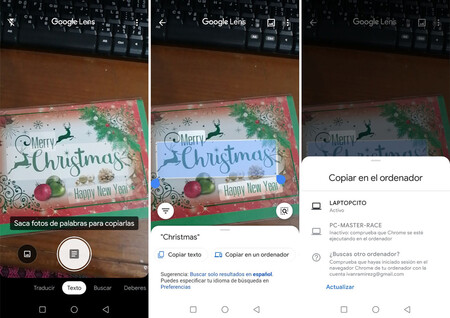 If you want to identify texts, but not translate them, it is better to use the tool Text. It is the specialized way of identifying written text. When activated, Google Lens essentially turns into a pocket-sized OCR scanner, highlighting the text it detects.

By tapping on the text you can copy to clipboard from the mobile or even send it to the clipboard of a PC on which Google Chrome is installed. To do this you need to press Copy to computer then choose this computer from the list that appears. 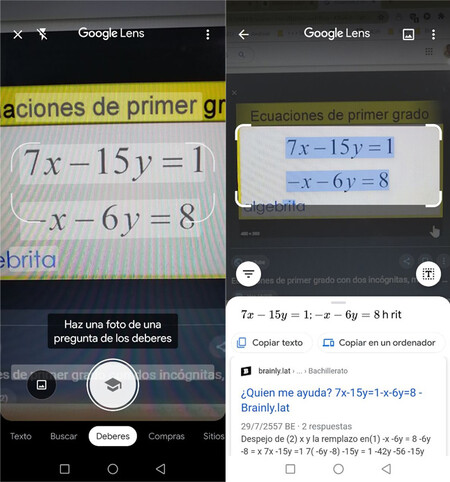 One of the latest additions to Google Lens is Homework Mode, with a more academic focus and the reuse of Google-owned Socratic technology. The idea is that you do a homework photo and get help with a specific problem

In practice, homework mode it’s still a little green and often your search for answers will end with a simple Google search for the question statement. It is predictable, yes, that the content will improve over time. 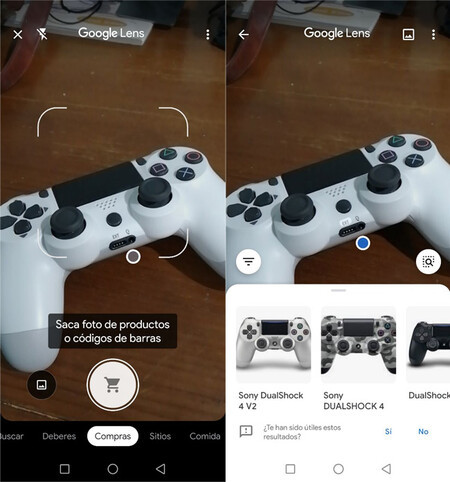 One of the first functions acquired by Lens was to research similar products on sale. These types of recommendations are very common in standard search mode, but you can force them if you are using Shopping mode.

After enabling shopping mode, point the camera at an object you want to search for in online stores and wait for the little circle to appear on it (or press the shutter button). In the results you will see similar products in google search. 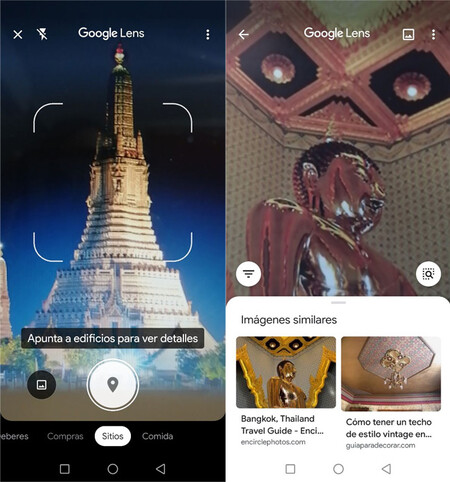 By switching to Sites mode, Google Lens focuses on recognize buildings to show you more details about them. The truth is, of all the modes available in Google Lens, the one in sites works the least because in the vast majority of cases it just searches for similar images in Google search. 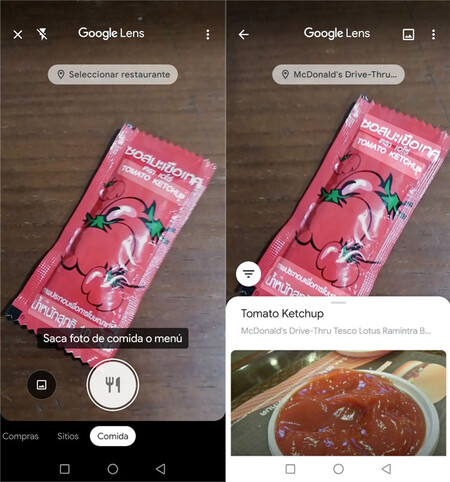 The last specialized mode of Google Lens is Food. In this mode, Google reused the integration in Google Maps, and can be used to take pictures of dishes or a restaurant menu, to see more information and pictures of said dish that someone has shared in a review.

This mode is geolocated, so Google Lens will try first determine which restaurant you are in (although you can change it by tapping on the top). This way you can take a photo of the dish that has just been put into a restaurant to see if it looks like what has been served to other people in the past. 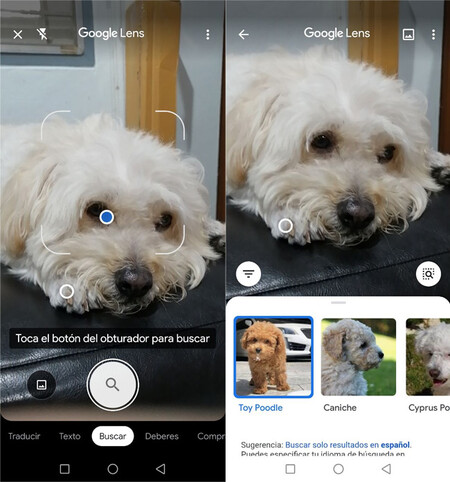 Finally, there is the standard search mode, which includes all of the above, without prioritizing any type of recognition. You can use it for recognize texts, places, search the web for similar photos, or search for products to sell similar, to name a few examples.

With Google Lens Search mode, you can take a picture of a plant to try to recognize what it is, see what the breed of a dog or cat is, or find clothing suggestions to suit your style. Google frequently improves the system, so the functions of Google Lens continue to improve and the global search shows you more and more information.