From the ashes of Spotify Car View is born Car Mode, the new interface for the car

There are many ways to use Spotify in the carcar app integrates with Android Auto, Google Maps, Google Driving Mode and Google Assistant, but since late last year there’s been one less, after the app removed Spotify Car View, its native function for the car.

Spotify claimed then that they were “actively exploring a variety of new ways to deliver the best in-car listening experience”, and now they’re starting to take shape. It is new car mode

New Spotify interface for the car

Last year, the stars aligned to make it difficult for drivers who don’t have Android Auto in the car to use Spotify easily and safely. Firstly because Google is removing Android Auto for phones and secondly because Spotify elminaba con Car View, your interface for the car. There are still ways to continue using Spotify by integrating it with other apps, but it’s not exactly the same.

, At least in theory. As of now, it doesn’t appear to be active for all users, although Spotify mentions it in its help, so it looks like it’s here to stay. Car mode will be offered as an option when connecting to the car’s Bluetoothby adapting the interface. 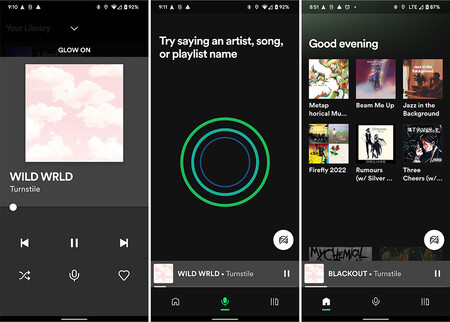 In car mode, we have bigger buttons and changes the change between written search for spoken search, because the central button of To look for turns into a microphone icon. The great advantage of Car Fashion in front of View from the car is that the interface remains practically the same, so that you can consult your music library in a more comfortable way.

The the player view is also simplified, with far fewer buttons than if we were using the normal mode and, again, with a comfortable button to perform voice searches at any time with a touch. All the basic buttons are there, but we would miss the context menu, the loop play button, sharing or access to the play queue, for example. We do not yet know when it will be activated for all users.

The new Android Auto interface surprises with its double panel: it surpasses that of Apple CarPlay