Google activates Discover redesign for everyone, first on Android 12

It started as a test at the end of last year and it looks like the test went well: Discover is activating for everyone the most minimalist redesign, which removes some decorative elements from the interface and adds a touch of Material You.

The redesign is enabled for everyone, yes, but first in the beta version of Android 12. A curious point about this redesign is that the search bar disappears

Discover’s design change is subtle, although several interface elements are removed to simplify the look. For example, each new it’s not on a mapInstead, they’re in a list distinguished by subtle dividing lines. A curious point is that the image has rounded edges at all its ends, while before only at the top.

The result is a slightly more refined design that stands out in particular because no search bar up. Instead, there’s a Google logo (which doesn’t do anything when you tap it) and a connection for Day View. This access was already there before, but now it has a more design Material You 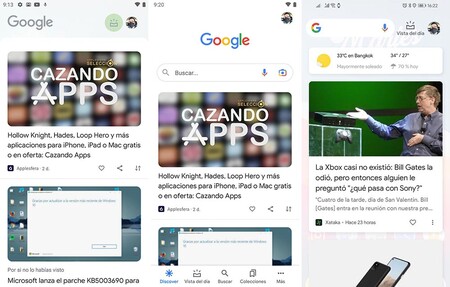 Check out the new design in the launcher (left), in the Google app (center) and the old design (right)

This means that you won’t be able to drag Discover into the launcher to do google searches, but it will remain as a place where you can check out articles that Google thinks you might be interested in. Unless, of course, that at some point Google makes a new readjustment and reintroduces said bar.

The redesign is also present in Discover in the Google app, where the news itself has the same design without maps, but the usual search bar is maintained, as well as the Google logo with colors.

Although this time the overhaul is enabled at everyone with Android 12It remains to be seen whether it will be extended to all Android phones with previous versions or if it will change before it does. Time will tell.