We told you a little over a month ago that Google had gone serious with a cleaning operation of its Play Store, the Android application and the game store. The North American company established new rules to allow outdated apps and confirmed that all apps that weren’t compatible with at least Android 11 could not be installed.

Presumably, this limit on Android version will change once Android 13 is released, as Google has talked about updating the app to at least the penultimate system version. It means that Google declares dead all apps that haven’t received updates in over two years

. Apps that, for all intents and purposes, would already be dead or discontinued. Now, a study puts a number on cleaning.

Google said the update limit for apps and updating them is November 1, 2022. As of that day, any app or game that hasn’t been updated for two years or doesn’t does not support at least Android 11, it cannot be reinstalled. . The company claims that this is a measure to protect user safetyand also to encourage discovery of newer apps by limiting access to outdated apps.

From CNET, we know that a consulting firm, Pixalate, allegedly removed or hidden a total of 1.5 million apps over the past two years. Apps that would have been marked as abandoned or neglected and, therefore, removed from the search and download lists of users who saved them. 1.5 million in two years between the two stores. A strong number. 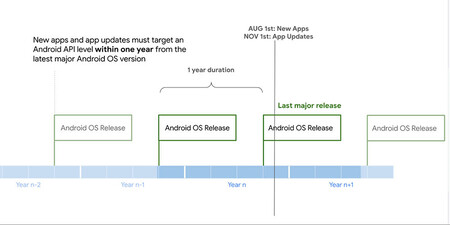 But that same report indicates that Google currently has nearly 900,000 apps in the Play Store will suffer the same fate during the next mass deletion, which will take place from November 1, 2022. The research generated by the study was carried out by locating applications that do not even reach Android API level 29. Applications, therefore, obsolete.

Thus, Google Play’s removal in November will end with some 869,000 apps removed or, at the very least, deleted from the respective searches. But beware, because in the App Store they are not much better. Although Apple is performing these wipes more frequently, the same report indicates that the App Store currently has nearly 650,000 applications which may soon have the “abandoned” sign.