Honor continues to strengthen its portfolio of devices once completely dismembered from Huawei: after introducing the Honor 50 and the Honor X20 SE, the Chinese brand has the Honor X20 ready. It will present it on August 12 within its Asian borders, it will have a triple rear camera and a screen with a refresh rate of 120 Hz.

Huawei’s move into the US veto has resulted in significant losses for the company, both in the mobile network and smartphone segments. To partially offset these losses, Huawei has decided to sell its Honor brand, a sale that materialized at the end of 2020. With the promise to regain ground on its own, Honor unveiled the first part of its X20 family in China

. Next week he will introduce another member. 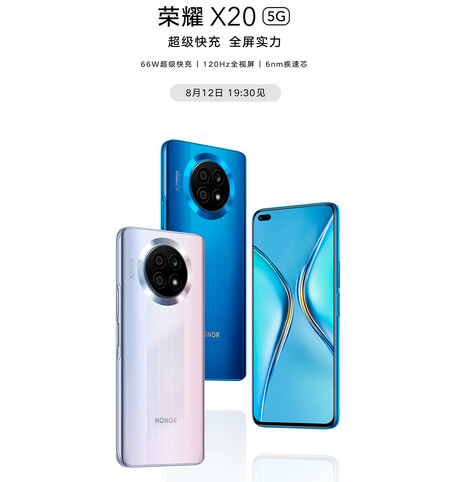 As is customary in many scheduled releases, Honor not only confirmed the presentation date of the Honor X20, it also unveiled some of its features. August 12 at 1:30 p.m. in Europe, this is the date that we have to put on the calendar. Interestingly, two days after Xiaomi unveiled the Mi Mix 4 and one day after all the onslaught of Samsung Unpacked.

The Honor X20 aspires to be in the mid-range by offering a design inherited from Huawei; with a clean facade, hole in panel for dual front camera, rear photo module in circular shape and fingerprint reader docked on the right edge of the phone.

The technology of the screen is not known, although it is very likely that it is an IPS LCD: it is not usual for brands to include a capacitive reader on the side if the panel is OLED (although it can happen).

The Honor X20 will have 5G connectivity, offer ultra-fast 66W charging and the processor, the manufacturer and model of which is still unknown, will be manufactured in 6 nm. It could be a MediaTek Dimensity 1200, for example, an SoC that we already have in mobiles like the OnePlus Nord 2.

There isn’t much left to finally see the Honor X20: on August 12, it will be officially presented in China. We do not know if it will eventually reach the international market, although it is not excluded.

Sales of Intel and AMD 2021 processors, these are the most purchased models

Sales of Intel and AMD 2021 processors, these are the most purchased models