In 2017, Google announced Android Go, a reduced version of the robot’s operating system focused on more power-efficient terminals. Later on, the lighter Go apps started to arrive, such as Files Go, Assistant Go, Maps Go or Gmail Go. Knowing that you can install many of these apps on your mobile even if it isn’t. Android Go, the question is inevitable: How is Gmail different from Gmail Go?

Gmail Go arrived in 2018 as a lite version of Gmail, with a similar design but a much smaller size. Three years have passed since then, and differences between Gmail and Gmail Go they are even harder to find. If you’re hesitating between upgrading to the light version, we’ll tell you what you’ll find and what you’ll miss in Gmail Go compared to Gmail.

Lighter, but not light 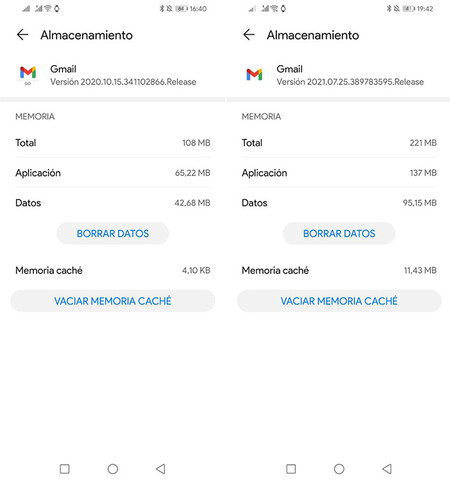 Gmail Go (left) takes up less space, but is far from a lightweight app

Gmail Go’s first APK was 9MB, but it has grown since then. The latest versions of the Gmail Go APK are already 30MB, which translates to a current app install size of more than 100 MB. A bit far from what we would call a lightweight app.

Light it is not, but yes lighter than the standard version of Gmail, which is roughly double the installed size, just over 200MB. Google has chosen to provide Gmail Go with almost all of Gmail’s functionality, so the size of the two versions of the app is ultimately similar. 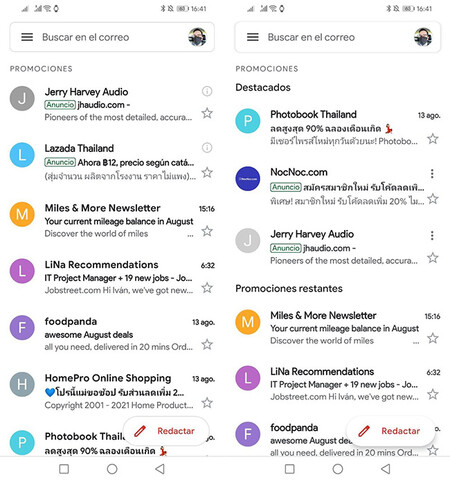 In early versions of Gmail Go, it was possible to find some small differences in appearance, such as the fact that images were not displayed to senders or a different account picker. These differences have been further attenuated in the most recent versions.

Currently, Gmail Go and Gmail look roughly the same in all its sections: the list of messages, the side panel, the account selector, the display of an e-mail or the composition of a message. Everything is exactly the same, if we ignore that in Gmail there are animations when dragging a message, which does not appear in Gmail Go. 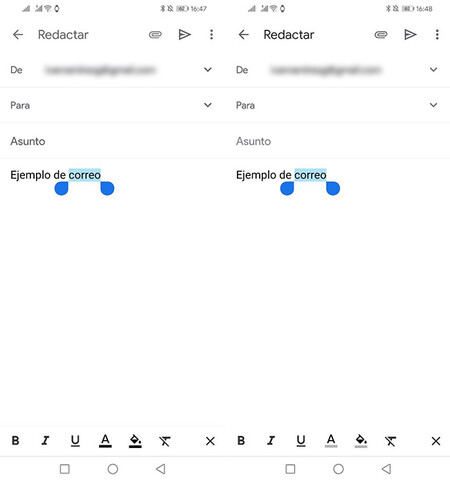 Everything is the same, although oddly enough Gmail seems to work easier than Gmail Go, at least in a terminal with enough power to move it. Gmail Go seems to suffer a bit with animations, as if it is running at a lower number of frames per second. Considering the fact that it is designed for very power strained mobiles, it is possible that this is intentional.

If you want to find differences between Gmail and Gmail Go, you will have to open the settings section of the app, and even then it is necessary to refine the view to find the differences. For example, in the notification settings of Gmail Go, the section disappears Notification sounds.

However, the most important change is that no Chat, Rooms or Meeting tabs in Gmail Go. They aren’t active out of the box, and you don’t need to turn them off manually. The functionality just isn’t there and therefore doesn’t show up in the settings either. 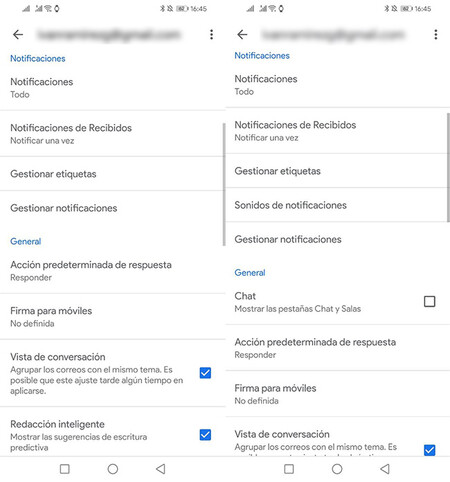 There are no Chat, Rooms, or Meeting tabs in Gmail Go

Gmail Go doesn’t miss out on the basics or the not-so-basic Gmail features like smart writing or smart replies, although others drop down along the way. smart customization features, in part because they are linked to Gmail Chat, which is not compatible with Gmail Go.

In the settings of Gmail Go, the Smart functions and personalization section does not appear or Smart features and customization in other Google products, which use content from emails, chats, and videos to personalize your experience. In Gmail it’s optional, and in Gmail Go it doesn’t even appear. 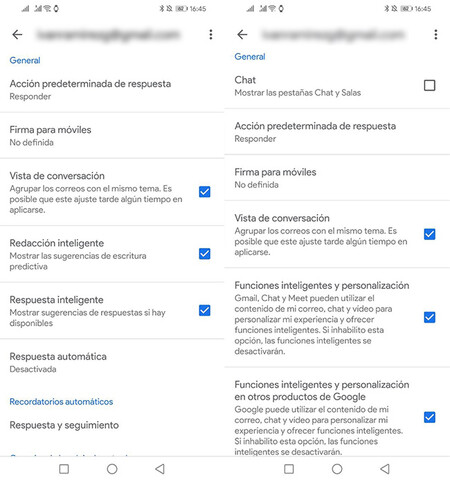 The rest is pretty much the same, and that is that over time Gmail Go has gone from a lite version of Gmail to essentially Gmail without chat, Meet integration. Everything is the same, looks the same and works the same, in exchange for a slightly smaller size.

Which one is best for you 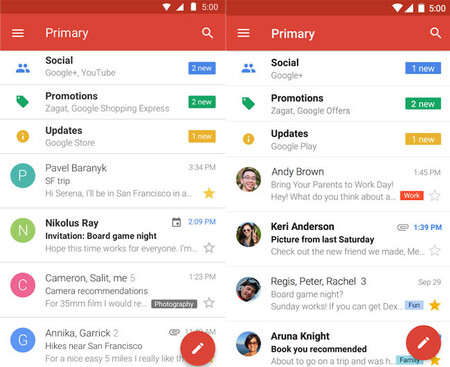 The first version of Gmail Go (left) was much different than Gmail (right), but today they are the same

In summary, Gmail Go is hardly different from Gmail. The appearance is the same, and almost all of Gmail’s features are present in Gmail Go, including things like confidential emails or scheduling emails. Google has favored extending all of Gmail’s functions to both versions over other aspects such as lightness.

Yes, Gmail Go is a bit lighter, although the savings will be relative since Gmail is preinstalled on all Android phones with Google services, so the space savings of switching from one app to another will be relative.

The main difference between Gmail and Gmail Go is that no Chat, Rooms and Meeting tabs, although that’s hardly a determining point in which app to use, as they can be disabled from Gmail’s settings, at least for now.

The situation therefore has a simple conclusion. If your mobile is Android Go, Gmail Go is more suitable, while if your mobile comes with Gmail, there is no compelling reason to use Gmail Go instead.

Around 20 minutes of Xbox Series X gameplay in the video