The routines have been sewn to the Google Assistant, Assistant, for over two years and have long been executable by any device in its ecosystem. We’re referring, of course, to the Google Home and Google Nest speakers, and they quickly made the jump to the Google clock, allowing us to create smarter routines.

Last month, the Google Home app took another step forward by improving both the reading controls and the routines themselves, as we could now choose which device they started on. For example, launching on a Google Nest Hub and not on our mobile phone. The next step is to allow these routines to be anchored to our desktop in order to launch them with a simple touch

, and we explain how this process is carried out.

How to put Google Home routines on your desktop

The novelty that the Google Home app incorporates with its latest update is that allows us to anchor the routines on the desktop of our mobile or our tablet in the form of direct access. So we can start them without the need for time or place triggers such as those that are activated when a certain time arrives or when leaving or entering the house.

Placing these routines as a shortcut on our desktop is pretty straightforward and is it? Google itself tells us how to do it when we go to the section corresponding to the routines in the Google Home app. At least until the news passes, the app itself will prompt us to bring the created routines to the desktop.

We show you the procedure step by step: 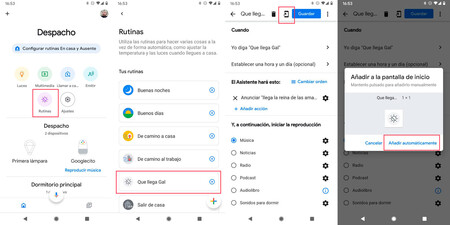 Once these steps have been followed, the icon for launching the corresponding routine will be available on our desktop to activate it when you want. It’s that simple. It remains only to Google to let us customize the activation icon, because it is quite bland. Hopefully this improvement will come later.