Power listen to music in high quality It depends on several factors, including how the audio track is recorded or the headphones/speakers we use. However, there is an element that we do not always have and that is Bluetooth, a connectivity present in practically all Android mobiles and which is to blame (for better or for worse) that we can listen to music with wireless headsets.

While it’s true that we can’t work miracles and change the Bluetooth standard, at least not easily, we can. change your codec to improve quality and make the most of our phone’s capabilities. In fact, it is not complicated, although you have to know how to do it and that is what we are going to tell you in this article.

some of them present in all devices and others less common, depending mainly on the range of the device.

The first codec is SBC. It stands for (low complexity subband codec) and it is one of the most popular codecs today for all devices. It supports mono and stereo audio, as well as sample rates up to 48 kHz. Almost all Android phones come with SBC by default to ensure compatibility with headphones and speakers. The problem with SBC, without going into too much technical detail, is that not the best codec for listening to hifi musicbecause its sound transmission properties are not the best.

aptX generally performs better than SBC in terms of sound quality and latency, however, it is not as universal as SBC, present in all devices

This is where Qualcomm’s own codec comes into play, aptX (and all its variants). This codec operates with higher bandwidth and lower latency (around 40ms compared to the over 100s that SBC can achieve) compared to the aforementioned SBC. Specific, has better speed to transmit sound (at kbps level), allowing you to move more data in less time. Immediate translation? Superior sound quality.

Another codec compatible with Android is LDAC, a Sony codec which again far exceeds SBC

. LDAC even has higher throughput than aptX. SBC transmits up to 328kbps, aptX up to 576kbps, and Sony hits a whopping 990kbps, triple the throughput compared to SBC.

AAC is another major player in this Bluetooth codec territory. It is the most used in the Apple world, although in Android consumes a lot of energy, so it is not recommended. Its transfer rate is also not the best, so it is one of the few options to exclude if we are using an Android terminal.

Finally, we find the Scalable Codec announced with the Samsung Galaxy Buds developed in collaboration with AKG. This codec prioritizes stability by making constant adjustments to streaming speeds. This is the most suitable option if we use a Samsung device with Samsung headphones.

How to change the Bluetooth codec 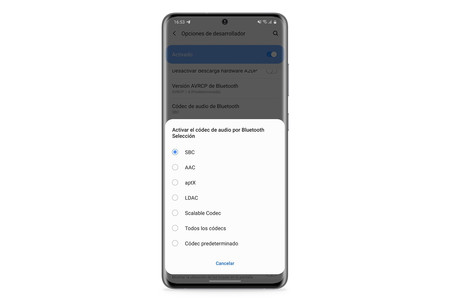 Before changing the Bluetooth codec of your Android remember to the device you are going to connect it to, because some incompatibilities may arise if both don’t support what you want to modify. Once you know the codec you want to use and are clear about compatibility between devices, just go to your phone’s developer options.

Before changing the codec, we must take into account the compatibility of the device to which we are connecting and the playback quality supported by the content.

In them you will see an option called Bluetooth audio codecs. Here you just need to change the codec to the one you want. You must take into account that the greater the range of the phone, the greater the compatibility with different codecs. For the codecs to work well, it is also necessary to take into account the type of content you are going to listen to, its quality and others, because everything does not depend on the mobile and the headphones and speakers.

In the same way, the device to which you connect the mobile must have support for the new codec you are switching to, otherwise the one you were using will remain, even if you change it in the settings.

The Quarterly Update reveals even more details about the Necromancer

The Quarterly Update reveals even more details about the Necromancer