Did you think eMule was dead? You’re wrong: not only does the service continue with a smaller but loyal user community, but the unofficial client for macOS called aMule has been updated and now there is even a native version for Mac with an M1 chip.

Yes, as you hear, the developers of this client did not give up their efforts and showed proof of architecture modification. Let’s see how to use and benefit from eMule network on Macs with M1 chip.

eMule on Mac (via aMule) is still alive and relatively healthy

The community of users of the eMule network isn’t as high as it was a few years ago, of course (and newer generations don’t even know what we’re talking about anymore), but that doesn’t mean that there are still no groups of people sharing their files.

In the case of macOS, the only way to connect to eMule networks is through the unofficial aMule client which you can download for free from SourceForge. Separately compiled versions for Intel and Apple Silicon appear in the list, but we’re interested download universal binary since for the moment the binary of Apple Silicon causes an authorization error in the system.

As soon as we run aMule on our Mac with an M1 chip, we will see that its execution is native, although its interface is rather antediluvian has not changed (I advise you to use the light macOS theme, because the dark theme melts the white letters into its background).

By default aMule will connect to protocol networks with default settings and we can start searching and downloading files. Otherwise, if you have the direct link to a .met server list file, you can enter it in the “Networks” section, in the “Servers” text field. Warning: there are quite a few links of this type circulating on the networks, but many of them have become obsolete or are empty lists.

Another important factor is the ports used by aMule to connect to its networks. These can cause what is called a ‘Weak id

‘, which hinders connections both with the service and with other users who have the same problem and prevents you from downloading files with all sources and available bandwidth.

The default ports used by eMule are 4662 (TCP) and 4672 (UDP), which usually give this Low ID either due to a security service we use (a firewall, maybe) and it limits those ports somehow or by the router itself leaving those ports closed.

You can change these ports to ones that you know are open or that no service is blocking, or you can access your router and open ports settings for the connection to improve. Depending on your router and Internet operator, how you open these ports will vary.

Something that is also worth remembering is the directory in which all downloads are saved,

which will also be the folder whose content will be shared on eMule’s P2P networks. By default, this directory will be:

Because the application not yet integrated with macOS Big Sur folder permissionsFor now, we need to use this directory without changing it to a more convenient one. The best thing is that we place direct access to the above in an accessible place such as the office to access them. 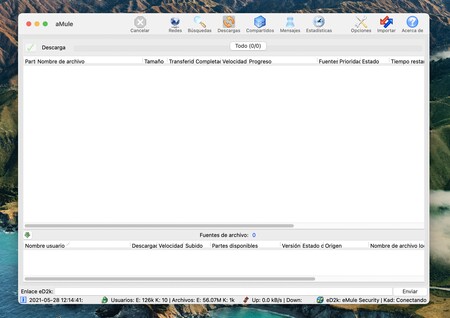 aMule (and the eMule network in general) is not the network that had its heyday more than ten years ago. But that doesn’t mean it’s over: he’s more alive than you might think. And the arrival of the version for Apple Silicon shows us that its developers they are ready to keep it alive on Mac as long as someone is willing to share files on their networks. Hopefully the next steps are to adapt to the security measures of the macOS and Apple Silicon chips so that you can use the desired download directory and not experience authorization issues as soon as the universal binaries become obsolete.

The cartoonist and screenwriter Benoit Sokal is no more, Microids pays tribute to him