How to install the Xiaomi launcher on any Android

Xiaomi installs the MIUI System Launcher on its phones with MIUI 12, a launcher that is only compatible with company devices, unless we find a version made by third-party developers. However, Xiaomi has its own launcher in the Google Play Store under the name Mint Launcher, a traced version, but compatible with other devices.

We will show you how you can install it and what are the main advantages of this launcher since, in addition to have the aesthetic so characteristic of Xiaomi

, it has some cool customization features.

The Xiaomi launcher, on any Android

Mint Launcher has been on the Play Store for a long time, although you might not have heard of it yet. It has already racked up over 10 million downloads and is available for any Android with version 5.0 or later. It weighs only 8 megabytes, so virtually any device can move it without a problem. 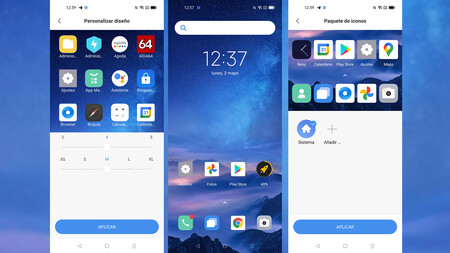 When installing this launcher we see that the interface changes directly to what we find in Xiaomi mobiles. In that case we have an app drawer

invoked by swiping from the bottom of the panel, a grid with rows of four apps, a clock widget and a search widget.

In terms of settings, Mint Launcher is quite complete: you can change the grid, the size of the icons, their design, the transitions, etc.

The interesting thing comes when opening the settings menu, which is the same as found in other Xiaomi phones. From here at first glance we can modify transition effects, automatically fill in empty cells or block the current design so nothing is misconfigured.

If we click on “more” we will find the complete list of parameters. From here we can change the icon pack, their size, automatically group apps or intelligently display app suggestions in the app drawer.

As you can see, a very complete launcher that gives you the options and the interface of a Xiaomi mobile, but in any other terminal with Android 5.0 or higher.