Android Auto takes the applications installed on the mobile, but only a small part of them are compatible. Of course, don’t think that you have to connect your mobile to the car to find out which ones you can use on your screen, as Google includes an option that lets you view them at a glance from your smartphone.

That Android adapts to almost any environment allows you to bring its excellent virtues to the screens of mobiles and tablets, but also to a watch, a television, the multimedia player and even a refrigerator. And the car is one of the environments where the system is used the most, not in vain Android Auto has become extremely popular

. Google is removing the limits for app development, so little by little the number is growing. Connecting the mobile to the car brings more than one surprise.

Use the customization options offered by Android Auto on your mobile 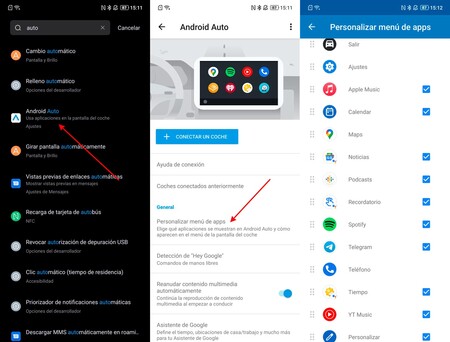 It cannot be said that the operating system of the vehicle can be over-personalized as Google does not offer too many possibilities. It is possible to change the wallpaper, the order of the applications on the screen, and not too much. Exactly, the reorganization of the applications is exactly what we need for our objective: find out which installed apps are compatible with the car

As we said, compatibility with the Android software ecosystem is minimal. Some applications for cards, media player, messaging and not too much. So if you want to know if what you have installed can be opened on the vehicle screen, you just need to follow the following steps:

This with regard to the applications that you have downloaded on your mobile. But what if you need to know the compatibility of an app you don’t already have? The best is check the list on Google Play and see if its description shows compatibility. In case the developers have not added this information, you can see if it appears in the official list provided by Google.

The number of applications compatible with Android Auto is increasing: if the application is interesting to use on the vehicle screen developers will surely end up adding the possibility. In the meantime, it will be time to check manually; Fortunately, there is no obligation to connect the mobile to the car to find out.

“Little Nightmare” is currently free to continue to use

"Little Nightmare" is currently free to continue to use