How to send disappearing photos in WhatsApp, now available in beta

WhatsApp already allows you to activate temporary messages in a chat or group, so that they disappear after a week, but I still had to activate the photos and videos that can only be viewed once, whose existence was disclosed a few months ago. The disappearing photos are already in WhatsApp Beta for Android.

This way you can send photos or videos to a cat who are deleted as soon as they are seen or, which is the same, that they can only be seen once. We explain how the disappeared photos from WhatsApp work.

Send photos that are only seen once

WhatsApp enables photos and videos for everyone that can only be viewed once in beta version 2.21.14.3, available on Google Play. This feature is available for photos and videos that you send using WhatsApp Camera as if you were importing an image or a video already present on the mobile, from the gallery.

The first step is to take the photo or choose it from our gallery. The difference is that a button (1) in the bar in the bar where you can add comments. By activating this button, the photo or video will only be visible once, and WhatsApp shows you an information window on its operation. 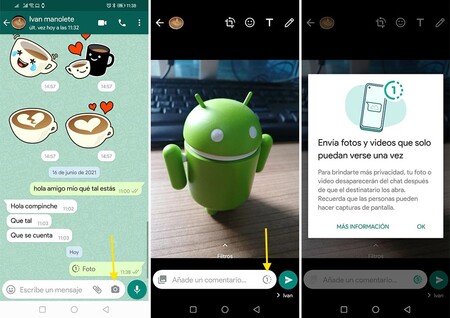 Photos sent in this way are not displayed in notifications and there is also no preview in the chat, neither for you nor for the other person. It just indicates that there is a photo, but you have to touch it to open it.

How to view photos that are only viewed once on WhatsApp

If they send you a photo that can only be seen once on WhatsApp, you can easily tell it apart because the text will just appear in the chat (1) Photography

, rather than the preview of the photo itself.

Tapping on the photo opens wide, and nothing prevents you from taking a screenshot. Additionally, WhatsApp will not notify the other person that you have done so, as it does in other apps. If you click on the button (1) in the top bar, you will be reminded that you can only view this photo once. 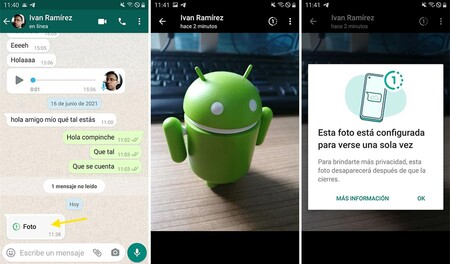 As soon as you close the photo, you won’t be able to see her again. In the chat, it will continue to show that there was a photo that could only be viewed once, with no preview, but tapping the message won’t open anything.

More colors and more battery for the Apple Watch Series 7